What happened to September?

I swear yesterday was the 4th of July. I don’t remember most of August and I have no clue what happened to September. Life. Life happened. My kid started school, my job ramped up 400%, a guy at work quit, my buddy needed personal intervention-style help, my church asked me to be a deacon, it was completely nuts.

At work I went from having tiny projects here and there to two massive projects running through the end of the year. They require constant attention and are completely stressing me out. Added to that, one of the other guys quit and now those of us that remain will be pulling double duties until he can be replaced, if he’s replaced.

At home, we were surprised by some bills that we thought we had covered and that zapped up pretty much all of our income last month. So much so that even though one of my best friends from college is getting married next week, I couldn’t afford a plane ticket. I’m pretty ticked off about that one. I have no one to blame but myself.

At church, they nominated me to be a deacon, which was both an honor and a scary proposition all rolled into one. I declined, but only because I felt like I could be more help in other areas at church, and volunteered for the “IT Ministry”. I need to make t-shirts with that on it, lol.

I think, in the past 30 days, I’ve looked at baseball cards or video games a grand total of 3 times. I think I sorted the contents of a blaster, and played Rocket League for about an hour. That’s it. That’s how insanely busy it’s been around here.

October better calm the heck down, or I’m going to be nuts by the holidays.

So, Memorial Day weekend was fun. We had some time to relax, play in the pool, and visit with friends, including the Dimwit who came into town for a party. He hand delivered the Brentz auto I had mentioned before and also gave me some new Topps Archives he had pulled out of a blaster that morning. I’m kinda torn on Archives. I like the ’71 and ’80 base cards and the ’56 relics and those B&W deckle edged ones, everything else isn’t really my tastes. The card stock is also thin, like a regular Series 1/2 base card would be, but the price per pack is high, like Heritage. For $3 a pack, I’d rather buy GQ or A&G. I guess I don’t understand the need for another retro themed product, but I also can’t find any information on if Topps is doing a 2012 run of Lineage. My guess is that Archives replaced Lineage in the same way Tier 1 replaced Marquee (or did Museum Collection replace both?). That said, I’m very appreciative of the cards Sam gave me. It was just enough to get me to find the team set, but not much more. In case you’re wondering, here are the four he gave me… 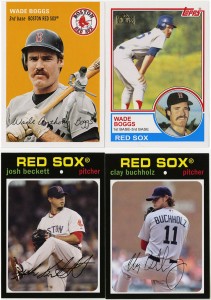 The only thing I don’t really get, are the facsimile-autos on those. For example, that’s not Buchholz autograph, at least not one he “officially” signs cards with. For comparison, here’s the patch auto I got a couple months ago… 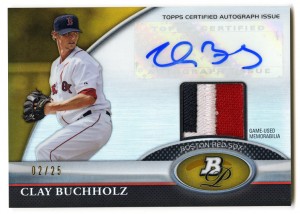 Notice the difference? Why Topps? Why fake a FAKE signature? That’s just silly. Maybe Clay (and others) signed contracts with Topps using a “personal” signature (as they would if they wrote a check), and they used those (with permission?) and then they all have different “fan autos” that they use to sign cards, boobs and whathaveyou. That’s confusing as hell. And weird. Weirdly confusing. Weirdfusing!

Oh, and here’s the Brentz, which is awesome. Very excited to have my 2nd Brentz auto in the collection, and to have completed the 3 autos from Sterling last year. This one makes me happy. Thank you again Sam!!! 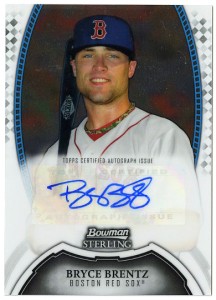 I promised a post about modern art and by holy Helvetica, you’re going to get one whether you want it or not. lol.

After wrapping up a fun day of shooting on Saturday, Sunday we decided to play it a little more chill. We took our friends and the kiddos to the Dallas Arboretum, just to walk around and have a nice picnic lunch before getting back on the road in the afternoon. It’s a great park and botanical garden and also happened to be hosting a huge Dale Chihuly exhibit. For those of you unfamiliar with the name, Dale Chihuly is a modern glass artist who does huge sculptures out of blown glass. He’s actually one of very few modern artists who’s work I appreciate. Not only are they aesthetically pleasing (mostly), they’re also so massive in scale and the craftsmanship required to construct them is so clearly off the charts that I can’t help but be impressed. Am I a huge Chihuly fan? No, not really, but they are undeniably impressive, regardless of your feelings on modern art as a whole.

Anyway, of course I had the camera in tow, and I took a handful of photos as we were walking around the grounds…

END_OF_DOCUMENT_TOKEN_TO_BE_REPLACED

This weekend we decided to pack up the car and take a drive to see some close friends who had recently moved. They’re some of our best friends and we had all missed each other, so it was great to catch up and hang out all weekend. They have a little boy just a bit older than our kiddo, and they played great together. The drive was rough, but we had decided to time it around major “napping” times, so luckily our little one slept most of the way.

Friday was just arriving, hanging out, burgers, beer, that sort of thing. Matt and I (yes, we’re both Matt) talked video games and sports and the ladies swapped cake recipes and diaper rash stories.

Saturday was a little man-adventure for me personally. I’ve never, in my entire life, up until Saturday, fired a gun. Not once. My father owns a couple guns, but isn’t much of a hunter, and they’re mostly for home protection and the occasional dangerous wild animal (the live up in the Green Mountains). In my adult life, it’s just never been something I had considered. Any “good guns” were always too expensive and “cheap guns” just sounded like a bad idea. Like my father, I had considered a shotgun or a handgun for home defense reasons, but had never gotten around to it. So, when Matt suggested we go to the rifle range and fire his AR-15, I had no idea what to expect.

I understood the “basics” of a gun before I went in, I’m not a moron in that respect. I know which way to point it, about trigger safety and those sorts of things, but I wasn’t really up on the specifics (sounds, kick, how hot the damn barrel gets, etc). After a quick safety lesson from the range master, who also helped set me up at a station, it was off to the races.

After about 20 minutes, we traded off and went back and forth like that until I had fired at least 10 magazines and gone through and entire box of ammo. Again, not knowing what to expect, I just aimed for the middle of the target through the scope. I figured all those years of FPS practice had to be good for something…

Both my friend and the range master were impressed at my “grouping” for a first time shooter. I can’t really explain it other than that I just did what made sense. They both congratulated me on finding an apparently hidden talent.

Our little excursion into guntopia wasn’t complete though. Matt wanted me to try a shotgun next, so we left the rifle range and went over the the Skeet course. I (obviously) didn’t have a shotgun with me, so we rented one. Also, either the guy at the rental counter was screwing with me (probably) or I asked for the wrong thing, because he pulled out the largest, heaviest, most crazy shotgun I had ever seen. Matt later told me it was an “Over Under 12 gauge”.

Anyway, off to the Skeet course we go. Another quick safety lesson, and more particulars about the “over under” concept, and I was ready. Matt was manning the launcher controls and I stepped into the box. I yelled “pull” and blasted the first bird into powder. Matt’s jaw hit the floor. “Do that again” he said, and handed me two more shells. Next two birds, dust. He thought I was screwing with him and that I had shot before. Again, nope, just doing what I figured made sense. Track the clay pigeon, lead it a little, press the “go away” button. lol. We ended up going through 5 boxes of shells, taking turns shooting and operating the launcher. In all, I probably hit about 35-40% of everything I shot at. The center of the course (which requires the most leading) gave me the most trouble, but anything that was closer to 90 degrees, that was more “twitch” based, was toast. I guess years of video game playing has actually paid off. Look ma!

Anyway, I didn’t recount all that to toot my own horn, I mentioned it because it was one of the most fun things I’ve done in, well, ever. I had a blast, no pun intended. If a really nice shotgun wasn’t $1500+ I probably would have bought one on the way home, lol. It was just great to get out of the house for a little bit, get some fresh air, try something new, and for once not completely suck at something.

It’s been a good day for receiving things from the United States Postal Service. I got a whole bunch of goodies today. For starters, I had sent away a couple weeks ago for “Fan Packs” from the Bruins and the Red Sox. They both showed up and they are both awesome. The Bruins pack has a couple big stickers, two car bumper stickers, some funky Zamboni shaped rubber bands and a small pack of 2010 Bruins hockey cards. The Red Sox pack had a picture of Jon Lester, a card for Wally the Green Monster, a Red Sox wrist band and a small packet of Fenway Park dirt, which is epic. END_OF_DOCUMENT_TOKEN_TO_BE_REPLACED

Visiting the inlaws is like a surgical air-strike. Quick, painful and a lot of collateral damage.