It’s been a good day for receiving things from the United States Postal Service. I got a whole bunch of goodies today. For starters, I had sent away a couple weeks ago for “Fan Packs” from the Bruins and the Red Sox. They both showed up and they are both awesome. The Bruins pack has a couple big stickers, two car bumper stickers, some funky Zamboni shaped rubber bands and a small pack of 2010 Bruins hockey cards. The Red Sox pack had a picture of Jon Lester, a card for Wally the Green Monster, a Red Sox wrist band and a small packet of Fenway Park dirt, which is epic.

I also got a package from my card buddy Sam, containing a whole plethora of Sox cards, including a huge chunk of the Topps 2010 set, two Gypsy Queens I was missing, a gold serial numbered Gonzo card and an original Pedroia MVP card. Sweet! Thanks Sam. He should be receiving his box of cards from me in the mail any minute now. I sent him a whole pile of Astros stuff, including that nice Hunter Pence relic I found a while back. I knew he’d appreciate it more than me, and he helped get me started and filled in a bunch of holes in my collection, so he deserved it.

Anyway, good day to get mail. 🙂 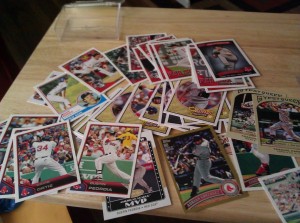 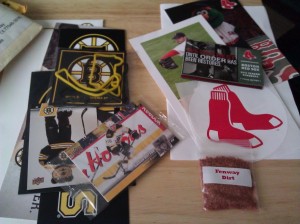