Cards I don’t have

Someone posted a while ago about how, as a group, we’re always posting about cards we receive, but rarely post about cards we’re trying to find. I also noticed Spankee’s post about “if I had $1600”. I thought a combination would be interesting. What would I buy if I had the money. So, no limits money wise, but I’m not going to include any $5,000 cards on this one. I don’t really “need” any Babe Ruth bat knobs. So, here’s my ultimate “if I won the lottery” list of cards I would buy.

END_OF_DOCUMENT_TOKEN_TO_BE_REPLACED

So much going on in April, I haven’t even had a change to write recently. I’ve been working all week, and working extra photo shoot on the weekends. I’m just wiped out. On top of that, we had some remodeling work done in our office and removed a few walls to make the space more “open concept”, which is a nice corporate way of saying “shitty” and “we want to be able to see what you’re doing”. If I ever meet the person responsible for that shift in corporate culture I’m going to be sure to kick him square in his Italian dress slacks. So, we packed up everything, moved two suites further down the hall, squatted in a conference room for 5 days, then took 3 days moving everything back and rearranging our new space.

The upside of all of that is that I now get a “window office”, without the walls to make it an office. I’ll call it a “window corner” instead. The downside is that I’m now sitting in what used to be the server closet, complete with it’s over-zealous air conditioning system. It’s 50 degrees in my corner, and 75 in the rest of the office. Not that I mind being slightly cooler, but my hands are turning blue and my glasses fog up whenever I cross the room to get coffee. They need to come fix this.

In other news, I did some minor upgrades to the old personal PC. I’m rocking a new GTX 650 and 2 new sticks of memory. The only trouble I had was since I was now way over 4gb of ram, I needed to use the 64-bit version of Windows 7, instead of the 32-bit I was running before. That’s ok though, I have a legit copy of Win7, and had the install disc handy. I pop it in, get everything rolling, only to realize that the disk only has the 32-bit version on it. Whoops, my bad, used the wrong disc. I pull out the box, and the 64-bit sleeve… and no disc. I have no idea where I put it. I have a, for once, completely legit copy of Windows 7 and I’ve completely lost the disc. Thankfully I know someone with a TechNet subscription and they grabbed me the ISO. That’s my project for this weekend. Hopefully it should go smoothly.

Lastly, I haven’t forgotten about those boxes of cards that I have all packed and ready. Free cards for you guys still takes some money on my end, and I’m just waiting for pay day, then they’ll be on their way. Scouts honor. 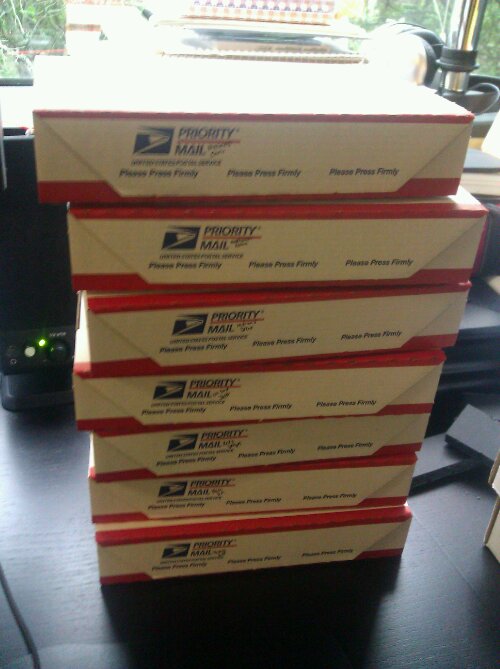 Recently, we were closing down and consolidating two offices in the same town into one new larger office, there were a lot of office supplies that were doubled and that they were throwing away. Our receptionist, who knows I’m a card collector, was tasking with organizing what we kept and what got donated and/or thrown away. We also moved to a more digital records keeping system, which made some of our old files irrelevant. All that combined into her holding onto several huge moving boxes full of 3 ring binders, specifically with me in mind. Today she pulled me aside and asked me if I’d like “a couple”. Of course, binders (even cheap ones at Walmart) are still a couple bucks, and I could always use more. She opened up a storage room and said, literally “they’re all yours”. I was told to take what I wanted because the trash guys were coming Monday morning to haul whatever was left away. 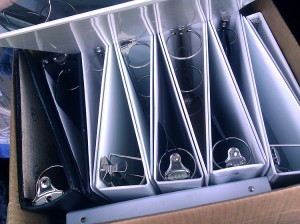 I stuffed 3 boxes in my car, and now I’m literally set for the next decade. These aren’t cheap crappy binders either. These are either “modern” premium office binder, things we’d use for official work, or, and this is way more interesting, old school, 1950’s-60’s style binders. These are heavy duty, at least double thick, with steel rings (not aluminum), and hindges, not just folds of plastic. Check these out. There’s at least a dozen or so of these, mixed in with the new ones… 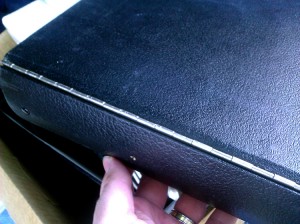 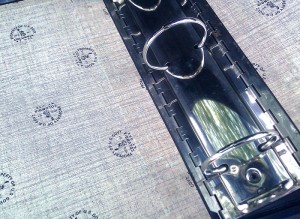 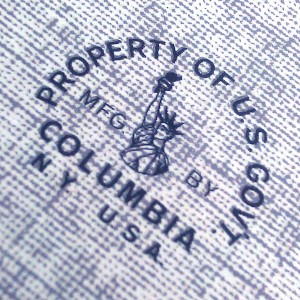 Check out those crazy hinges. They don’t make binders like that anymore! These are going to be awesome for putting vintage cards in. The best part is that they’re all recycled, so nothing is heading to the landfill. They were just going to toss them. I’m more than happy to put them to good use. 🙂

Moving away from return packages for the moment, I also received the group case break loot from Sam’s 2013 Gypsy Queen case. He landed plenty of awesome autos and relics, but unfortunately, I was hitless. On the bright side, that landed me an extra spot in the “whole set” raffle. With shared dupe base cards alone Sam was able to put together 3 complete sets, and I got randomized one of them!