And out they go!

All 10 boxes I had packed up are now on their way. Everyone who had requested cards in the past two weeks has a box on the way to them. I used the option on USPS.com to email each recipient, so you should all have tracking info in your inbox. It’s ALL priority 2-3 day, since those priority boxes ended up being the cheapest route, so start looking for boxes Mon/Tues. Have a great weekend everybody! 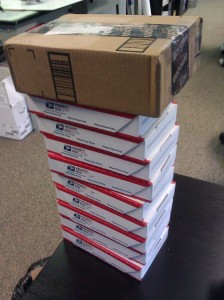 I decided to put most of my February and March card money towards two massive breaks. Sam’s Gypsy Queen case break, and Tophers Allen & Ginter case break. By buying into those two, I’ve pretty much guaranteed my important sets are complete for the year. The only other product I’ll buy, Bowman Platinum, won’t come out until the end of the summer. Everything else, IF I buy it, I’ll buy in “team set” form from somewhere online. I just don’t have the cash to go chasing a bunch of retail this year. That doesn’t mean I’ve been completely devoid of pickups this month though. I actually have a couple nice ones, and a couple pieces of trade bait too!

END_OF_DOCUMENT_TOKEN_TO_BE_REPLACED

When the Sox are in Town

With the beginning of the season right around the corner, and the “season ticket holders first” bullshit embargo finally over with buying tickets, I took a look at getting some seats to all the Astros vs Red Sox games this year. I had heard on the radio that they had artificially inflated the prices of the Red Sox, Yankees and Rangers games since they figured they would draw larger crowds, and that people were pissed, but I hadn’t heard any prices. Sadly (and this isn’t a slight against Houston fans, just Houston management), they didn’t realize that Astros fans just weren’t willing (yet) to shell out that kind of cash for tickets. If you’re used to paying less than $30 a ticket for the past decade or so, you’re not going to shell out $400 suddenly, just because a particular AL team is in town. Case in point. 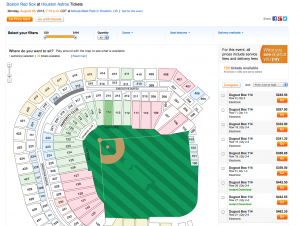 I don’t sit in the outfield at Astros games. I don’t. There just isn’t any reason to. I hate to sound like a snob, but if I’m going to a game, and can get seats along 1st/3rd for under $30, why would I pay $7.50 to sit where I can’t see the game? $30 isn’t breaking the bank, and for me going to a game is a treat. A treat I’m willing to pay for. Now, that’s the direct result of having the Astros as my local team. Back home in Boston, there simply aren’t any seats available near the infield, and certainly not for less than $100, it just doesn’t happen. Hell, to get season tickets someone has to die. Literally. There’s a waiting list. I’ve sat out in the bleachers at Fenway for most of my life, so, this isn’t a slight at the seats either. It’s FUN out there. I like it.

Minute Maid park is the complete opposite. I take full advantage of the low ticket prices and I treat myself to a good seat. This move to the American League might bring some more of the “fan favorite” teams to town, but Houston ownership needs to realize people won’t pay THOSE prices. Sure, add $20 to a ticket. I get that. A $30 seat becomes $50. I’d still buy it. $450 a ticket? No, no, nope, nupe, noooope. Not going to happen.

That’s a MONDAY NIGHT game as well. That’s a “leave work early and sit in traffic” game. That’s just not going to happen.

I think I might actually wait a bit. I have until August. I’m guessing with the Astros perceived level of play this year, and the Red Sox equally mediocre predictions, that those ticket prices are just high because the season hasn’t started yet. It’s going to feel damn good to sit next to people in August, knowing that I got a ticket for a tenth of what some sucker is paying this week… if those suckers exist. I doubt too many people are jumping on $400 tickets this year. Please keep is real Astros front office! You might be in the AL now, but you’ve got a long way to go before we’re dropping $462.35 on a ticket. Just saying.

So, first of all, a big thank-you to all you guys for your response to my spring cleaning. I’ve got a considerable amount packed up and ready to go. Somewhere along the way I realized that I’ve never really sent this many cards out before. I had to rethink the logistics of it a little bit. I had a couple 8×10 padded envelopes that went out already, and they worked well, but I ended up taping up little bricks of cards, and then finding a backing for them, and it ended up looking like I was mailing a text book to people. It was also heavy. The lightest package was 1lb, 2oz. That ended up being just north of $5 to ship, a price I’m more than willing to eat. I’m considering it the “cost of doing business” as well as a great way to make new friends and trading partners. If $5 gets me a permanent trading partner for a team I didn’t have before, that’s shipping money well spent in my book. We’re in this for the long haul people!

Anyway, my point is that at $5 an envelope, I wasn’t really saving any money over a USPS flat-rate box, which A) are free from a “supplies” perspective, and B) ship for $5.70 anyway. 8×10 bubble mailers aren’t cheap, and free boxes trump that any way you slice it. So, off to the post office I went. I got a whole pallet of them. 25 boxes, all free.

Then I started putting cards in them… 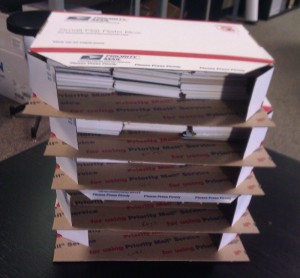 Hmm…. That doesn’t look like the safest way to ship cards. Hey, free cards are free, but I’d still like them to show up in one piece. I may not be personally interested in the players and teams on them, but the people I’m sending them too might. So, I got a little creative. 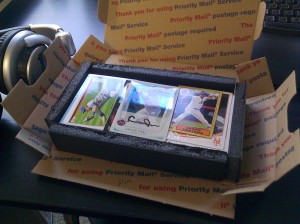 I had some old double thick foam-core sitting around from a photo shoot and decided to chop it up. I made 4 sides, all the same height, and it filled in the gaps perfectly. Now the cards are protected on all sides, the foam-core is ultra thick, they should be completely safe… hmmm…. but what about the “good” cards, we don’t want them just floating around in there, right? 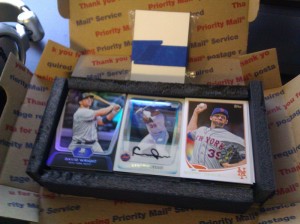 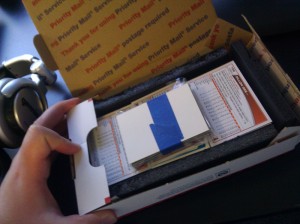 There, that’s better. I wrapped the slightly above average cards in a team bag, topped it with a blocker, and set them on top. This way they’re also a little bit of a surprise too. Notice how the side flaps fit perfectly over the foam-core, holding everything together. Padding all around, especially for the good stuff. 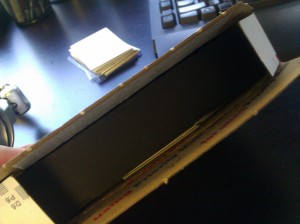 Even the front is protected.

Overkill? Probably. Worth it? I think so. It took me 15 minutes to chop up some foam-core with an Exacto, and it’s the perfect packing material. 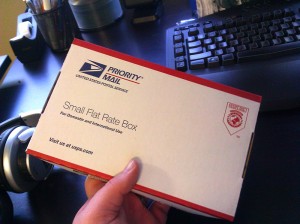 So, now I’ve got a big stack of these ready to go out. Of course, I also realized that this week isn’t my paycheck week, so… yeah. Not going out today. Sorry kids, the electric bill comes first. But, rest assured that these are ready to roll, and will go out at the first opportunity. The only exception being the Yankees, who, by rough estimate, have nearly 400 cards. I’m going to have to find a bigger box for that.

Have a good weekend everybody.

Three More, Out the Door

Update on my spring cleaning. Three more packages went out today. Diamondbacks, Rangers and Dodgers are all on their way to new homes. They are all priority 2-3 day, so you guys should have them in hand probably Monday or Tuesday. I also handed Sam his stack of Astros in person when he was in town, so those are gone as well.

If anyone is interested, I’m still looking to liquidate my more common stuff, and it’s up for grabs. Leave a comment on the original post to claim a team. I’ve cleared out a considerable amount, but there’s more progress to be made. The largest remaining stacks at the moment, and this is purely a guess and not actually counting, probably belong to the Marlins, Athletics, White Sox and Yankees. Those are the teams I’ve never completely a trade with a collector of. If you know anyone who collects those teams, send’em this way.