I decided to put most of my February and March card money towards two massive breaks. Sam’s Gypsy Queen case break, and Tophers Allen & Ginter case break. By buying into those two, I’ve pretty much guaranteed my important sets are complete for the year. The only other product I’ll buy, Bowman Platinum, won’t come out until the end of the summer. Everything else, IF I buy it, I’ll buy in “team set” form from somewhere online. I just don’t have the cash to go chasing a bunch of retail this year. That doesn’t mean I’ve been completely devoid of pickups this month though. I actually have a couple nice ones, and a couple pieces of trade bait too! 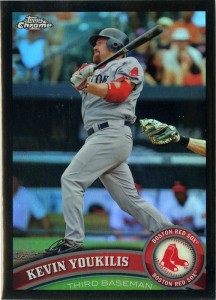 First up, 2011 Chrome, black border, /99 Kevin “this is the right uniform” Youkilis. Honestly, I just need to go “for the rainbow” on all of these. I’ve picked up more than half the black, gold, blue, red, orange versions of the entire team. I said it last month as well, but I never got around to it. A list shall be made! 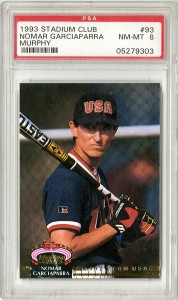 So, here’s my deal with graded cards: I won’t send things to get graded, but it someone else wasted the $20 on it, and then put it up on ebay for $0.99, I’m good with it. The sad part on this one is that it was only graded an 8. The good part is that I don’t care! The slab is all scratched to hell though, and there’s what’s left of a price sticker on the back of it. It was obviously in someone’s card shop at some point. Does anyone know how to safely remove these from the cases? Personally, I think it would look nicer in an un-scratched One-Touch, but I don’t want to destroy it trying to get it out. Also, as far as the card is concerned, that a big check off my top-10 list. Just 2 more rare Nomars to go! 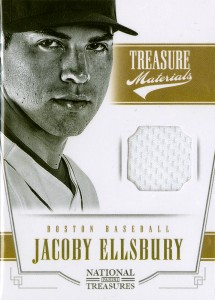 So, Panini doesn’t have a license, and as we’ve all heard by now, they won’t for at least another 7 years. That’s bullshit, but that’s a topic for another post. This post is about how awesome these National Treasures cards are. High quality, beautifully designed, numbered out of 99. The best part, this was part of a 3 card lot. The other 2? 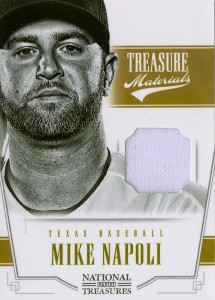 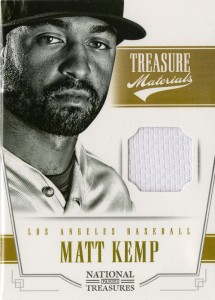 I’m not really sure how those scanned different colors, lol. Three cards, $2.50 total. Win! The Kemp is 25/99 and up for trade. I’m on the fence about the Napoli. It’s not a Red Sox card, but the swatch is just plain white, and the phrase “Texas Baseball” has a nice ring to it. I may hang on to it until I have a legit Napoli Sox relic in hand. Unless of course someone makes me an offer on it I couldn’t refuse. Anyway, the Ellsbury is 53/99 and the Napoli is 57/99. 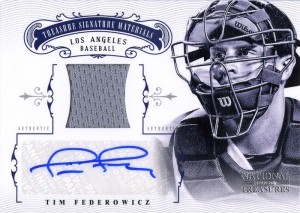 Soooo, this one is kinda awesome. Tim was a Red Sox prospect for years and years. I’ve got his Bowman Draft card where he’s sporting this terrible mustache (which is why I remember him). He was traded to the Dodgers in 2011 for Eric Bedard. At the time, and still to this day, we have a surplus of catchers in the system, and he was very tradeable. I just wish we had gotten more for him. This card, auto-relic, 38/99 was a steal and was from the same seller I got the other 3 National Treasure cards, so combined shipping! Yay. I’d consider trading it, but the offer would have to be right. 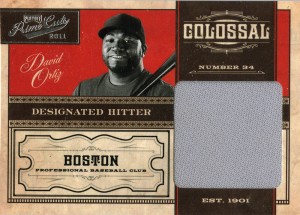 If I’m going un-licensed, I may as well go all out. Actually, at $0.99, it’s hardly all out. I have no idea why no one else wanted this baby. Awesome card design, huge swatch, 47/49. Awesome card all around. Even better, it was ALSO in a lot. It came with this… 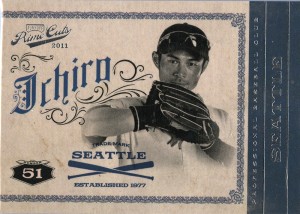 How Ichiro and Ortiz go together I’ll never know, but it’s card 05/99 and was completely free. Totally up for trade.

Next up, Garin Cecchini, Team USA “Future Watch” auto/relic, 732/899. Not that 899 is ultra rare, but I already had the Bryce Brentz from the same series and I happened to notice this at a good price. I really liked the Upper Deck Team USA cards, but I’m excited to see what Panini is going to do with them as well. I’m a big team USA fan in general, so I’d probably pick up cards like this regardless of who produces them.

Last but not least, the biggie for this month, Fleer Platinum “Name Plates” patch relic for Nomar. Numbered 34/100. Sweet multi-colored patch. In Upper Deck’s press release this week (the one about getting a MLBPA license) they mentioned bringing back older brands from their catalog, and Fleer Platinum was one of them. Can’t wait!

So, that’s it for the moment. I didn’t go nuts this month and get a ton of stuff. I think, all together, these were under $20, and that includes the $7 for the Nomar. I think I did fairly well.