So Brock It Hurts

What does that even mean? I have no idea. All I know is that the collection has gone from “pretty complete” to “woah, you’ve got issues”. There is so much Brock, including some ultra-rare goodies.

END_OF_DOCUMENT_TOKEN_TO_BE_REPLACED

I’ve had this tidbit floating around in the back of my head for a while now, and I don’t think I ever actually stated it publicly. Here goes.

Phew, there, that feels better. I came to this realization a while back and actually bothered to do a little research on it. Turns out that nearly the entire card industry doesn’t use Sharpie brand pens for autographs. I know for a fact, and it’s confirmed by mutliple photos on their twitter account, that Panini uses these:

The size depends on the card. I’m assuming minis and small signing areas use the #313 (or Small/Fine) while the normal cards use the #317 (Medium). Usually in blue. 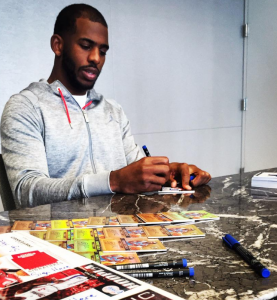 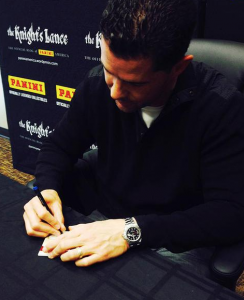 Here’s Michael Young of the Rangers.

See those black pens with blue caps? Yeah, those are Staedtlers. I also believe Topps uses them as well. Here’s an example, not directly from Topps, but from Bowman’s twitter feed, of a prospect signing his Bowman Chrome cards… 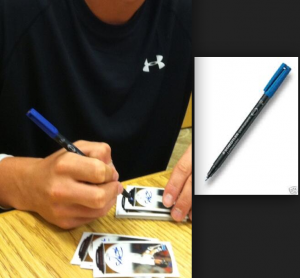 I added the image of the pen next to it for comparison.

I’ve always used Staedtler products for art projects, mainly their pencils and Mars erasers, but when I started noticing a trend with the pens I went out and picked some up. They are awesome.

They dry instantly, there’s zero worry about them smudging. They write on just about anything, including Chrome and super glossy cards! They’re also certified by the ACMI which means they’re most likely acid free and fairly archival.

So, just as a PSA for all you autograph chasers, go hit up your local art supply store and pick a few of these up. Even if you’re not chasing players for their John Hancock, they’re just nice pens to use on a daily basis.