Yesterday I was asked to work on a redesign for our inter-office “Good Practices” manual. It’s a fancy way of saying “Employee Handbook”. It’s ugly, boring and no one wants to read it but every new hire is required to. I worked on my design, which is simple, clean and very usable on multiple levels. It features a different main photo, in black and white, for each of the six volumes (did I mention this thing is 6 binders worth?). Along the top is a semi-transparent strip of white where the name of the company and the name of the volume are written in a nice and clean font (Gotham HTF). At the bottom right corner is the corporate logo. That’s it. Super simple, super clean. Just what it needed.

The design that was approved? A 1990’s Photoshop collage nightmare featuring random bits of clip art mashed together and a large title with a Photoshop “metal” effect and drop shadow.

The reason it was approved? It was similar to what we had and they didn’t want to change it “that much”.

It’s occurred to me that if they were paying a design firm to design things for them, changes/rebrands/redesigns like these would be taken as gospel truth, handed down from the mountain. Apparently an internal art department has all the respect and wisdom of a bathroom stall.

Things like that make me angry in such a way that I want to shut down and deal with it tomorrow. That somehow my not working the last 20 minutes of the day represents some sort of compensation for their stupidity or perhaps some sort of mental rebellion against bad design as a whole. Or perhaps I’m just thinking too much about a cover for a binder that no one reads anyway.

This Swine Flu crap is making me laugh. Seriously. I’ve gotten, in the past 3 days, multiple emails from governement agencies (because we get internal emails here at work) telling people to really be careful about this. This is totally and completely blown out of proportion.

I’m typing this as my co-working, sitting 15 feet away, is on the phone CANCELING her trip to Mexico in JULY. It’s the top story on every major news outlet, the top result trending on every search engine and the most talked about subject around the water cooler.

Let me put this into perspective for you. As of this morning, according to CNN, 230 have confirmed cases of piggy flu, including 91 in the US. By comparison, between 50,000 and 70,000 people DIE every year from the NORMAL FLU. Don’t believe me, check the numbers. How about a statistic with closer numbers. Every DAY, 5,000 people are rear-ended in a car accident. Or how about 341 people, per day, are killed in a head on collision. There ya go. You have a better chance of being in a deadly head on collision today, than contracting the pig pox.

Of course, the news isn’t going to tell you that. They want you to panic. They want my co-worker to cancel her trip. They want to fill up ERs, drug stores and doctors offices. You know why? Because it makes for awesome news. Their ratings go through the roof. People who don’t normally watch the news or watch news exclusively are suddenly glued to the channel. They make a mint in advertising dollars. Why do you think that “coming up next” or “when we return” they’ll tell you something new? It’s all a tease, a game, a bunch of steaming BS.

I should probably mention, that of those 91 people in the US, 1 kid has died. One baby. That baby came up from Mexico the day before. So, there ya go. The poor kid who died is just another number in the expected 70,000 to be killed by flu this year. It sounds bad, 70,000 sounds like a bad number, but you just have to put it into perspective.

I had decided to purchase the MLB.com “Gameday Audio Premium”. It’s $20 for the season. It includes the audio from all the radio stations, home and away, for all the games. It also includes the “Gameday” page with live box-scores, stats, pitch locations, etc. That was, until I read all this. On the website it lists the following:

That’s directly from the website. Notice the lack of “*” after those statements. Now read the fine print:

Regular Season Local Live Blackout: All live games on MLB.TV are subject to local blackouts. Such live games will be blacked out in each applicable Club’s home television territory (except for certain home television territories for which MLB.com may offer in-market subscription services). If a game is blacked out in an area, it is not available for live game viewing. Each game will be available 45 minutes after the conclusion of the game as an archived game (archived games are blackout free).

Regular Season Weekend U.S. National Live Blackout: Due to Major League Baseball exclusivities, live games occurring each Saturday with a scheduled start time after 1:10 PM ET or before 7:05 PM ET and each Sunday with a scheduled start time after 5:00 PM ET, will be blacked out in the United States (including the territories of Guam and the U.S. Virgin Islands). Live Audio of such games is available as part of any MLB.TV subscription or as part of the MLB.com Gameday Audio Package. Each game will be available 45 minutes after the conclusion of the game as an archived game (archived games are blackout free).

That makes it sound like the people the shelled out for MLB.TV, the $110 per season bullshit, are STILL subject to blackouts in their areas. It also makes it sound like the GameDay Audio is still available. That sounded ok. The local market games, provided they’re on TV, are blacked out. Ok, I almost get that. Then, as I’m searching for clarification, I came upon this. Directly from the “Audio Help Forum”, someone had asked why their audio stream was unavailable.

“Nationwide blackouts are standard as the national broadcast networks own the rights. We put up the archives of the game 45 minutes after the games are done though.”

Blackouts INCLUDE THE FUCKING AUDIO.

I’m sorry, I just don’t understand. Please, someone at the MLB, help me to wrap my head around this. YOU ARE the governing body of the sport that I love. YOU alone have the power to grant radio and TV broadcast rights under the authority of the commissioner of baseball. You didn’t save any of those rights for yourself??? The MLB isn’t allowed to broadcast it’s own games? Seriously? What in the flying fuck is that about? I get that some teams have their own broadcast rights, but even then, they still have to be approved by YOU.

I simply don’t understand. If it’s a money thing, I don’t understand how this is making them more money. Or how by broadcasting ALL the games they would make less. If it’s an advertising thing and sponsors wouldn’t advertise at the park or on TV if you’re broadcasting the games elsewhere, then wouldn’t the subscription fee for the service cover that cost? If I’m watching on TV, I see visual ads plastered all over the park, I see ads in the TV broadcast, I heard ads in the radio broadcast. What exactly am I missing? Who’s getting screwed that you NEED to blackout a game?

You know what, I’m going to write the office of the commissioner. I have a legitimate question, and I’ve love a legitimate answer. I doubt I’ll get one, but it couldn’t hurt to ask.

So, next weekend, all the ladies in our church are going to a women’s retreat until Saturday night. That means just one thing. LAN Party!

I’ve got a good sized group of guys coming over Friday afternoon for some gaming and we don’t plan on stopping until the girls get back the next day.

So far we’ve got PC’s, a couple monitors, 3 Xbox 360’s with 2+ controllers each, multiple TVs, a couple cases of beer and the pizza place on speed dial.

I’d like to some how take it to the next level, maybe set up a sound system with some techno going, or bring in some lights. I’d also like to borrow a projector from the office and maybe do some 120″ wall-gaming.

Ideally I think I’m going to need to find one more Xbox 360, one more copy of Halo 3 and CoD 5 and perhaps 2 copies of Left 4 Dead. That would give us an even number of everything across the board. Problem is the guy with the 4th Xbox will out of town and all three of those games are still $50 or more retail. So, renting becomes an option, at least until I realized there really isn’t a place to rent current-gen video game systems. I think both Blockbuster and Hollywood Video stopped the practice a long time ago and I don’t know what other options are out there.

So, now I’m looking around to see if any of our other friends in the area that have 360’s would let me borrow them, or if they would like to come, but if they come then I’d need to add another TV and another copy of the games.

It’s really kind of aggravating that there are so few multiplayer Xbox 360 games that support heavy LAN play. Halo 3 is only game that I can find that supports non-Xbox Live account multiplayer, meaning more than one person per console. With Halo 3 you can have up to four players, per console, with a maximum of four consoles (for a grand total of 16 person LAN play). Every other game that supports LAN play, is one person per console only. So, you can play Call of Duty or Gears of War with four other people, but you need 4 Xboxes, 4 TVs and 4 copies of the game. If everyone had the same taste in games maybe this wouldn’t be a problem but I’ve got guys who like WWII shooters but not zombies, zombies but not Nazis, Madden but not shooters, we’re all over the place.

Anyway, we’ll figure it out. I’m sure, even if we have to trade off every other round, that we’ll have a good time.

I’ve got two 1000ft boxes of Cat5 cable and I’m busy running long stretches of it across the house. I’ve got a 24-port switch and a 6 port to back it up in case it doesn’t work. This is going to be a good one.

I’m slowly trying to get all these guys, who have never really gamed before, into the sport. So far they all seem to enjoy it. My goal is that by this time next year, I’m planning a 30+ person LAN throw-down. I can’t wait.

What’s in Your Bag

A friend from church asked me last week how I was staying sane with all that was going on. I didn’t know how to reply at the time, but think at least part of the answer is in my messenger bag.

Last November, for our anniversary, my wife got me a really really nice messenger bag. Leather and ballistic nylon, with heavy duty hardware, magnetic closures and a really heavy duty strap. I really like it. I’ve been taking it to work with me every day since I got it.

Since we’ve been making frequent trips to hospitals and the in-laws, I’ve found a need to be prepared for just about anything. My current benchmark is to be prepared for a 48hr stay in a hospital waiting room. We’ve done the 48hr strait waiting game 3 times now, and each time I’m more and more prepared.

I thought perhaps it would be interesting to mention what I’ve got in my bag at the moment. Who knows, it could be enlightening.

Click for a larger image, with labels, but come back here for the explanations. 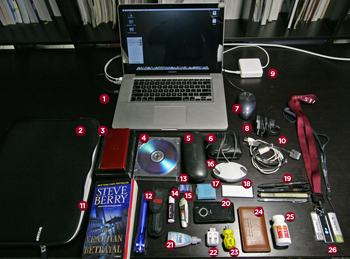