I’ve said many times before that I’m not a “box buster”. To date I’ve probably opened about 10 in my entire collecting life. It’s not that I don’t want to, it’s simply that a $75-100 gamble vs a $2 sure bet is a no-brainer. I’ll buy cheap cards all day long provided I know what I’m getting. Busting a box, to me, is the collecting equivalent of gambling. I just don’t have money to waste, every dollar is precious, so I like to get the most return for my money. That said, it is fun to do, especially when someone else bought the box. This Christmas my parents decided to wonder through my Amazon wish-list and settled on a hobby box of 2016 Diamond Kings as my present. A very thoughtful gift that I appreciated and enjoyed opening. The box guaranteed two hits. In my opinion, I got five. Read on…

END_OF_DOCUMENT_TOKEN_TO_BE_REPLACED

There’s not really any reason why I haven’t updated since November except to say that work was exceptionally crazy. In December I typically photograph a lot of Christmas parties, this year was no exception, and that took up the majority of my weekends. At work I also had a big push to finish a large web project by the end of the year. On the upside, with the free time I did have, I managed to carve out a good portion of time to do things with the family, which is infinitely more enjoyable than typing into a blog editor panel. We went to see the nutcracker ballet, we saw movies (Moana good, Sing bad), we played games, we had people over and cooked and ate and enjoyed the time we had together. I was going to mention something about my birthday, but thankfully it was a non-event, just how I like it. Lots of little things to catch up on here and there.

Overwatch – Had some time to really dig deep and enjoy it. I retract any of my previous statements about it being “vanilla” or generic. It has surprising depth and I’m really liking it. It’s that next evolutionary step beyond Team Fortress 2’s “rock, paper, scissors” formula.

Moana – Was genuinely awesome. The animation was good, the story was good, The Rock was excellent. Disney’s in-house animation is now on par with Pixar, I think that’s safe to say.

Sing – Was disappointing in a number of ways. For starters, everything in between the singing, which was fine, was very nearly PG-13. That’s fine for me, but it’s considerably above the heads of most 5-10 year olds. There’s robbery, foreclosure, depression, gambling debt, scams, breakups, theft, assault, near-murder and all sorts of other fairly dark themes that kids just aren’t going to get. It’s marketed as a kids movie, and it’s not that.

Rouge One – Wow. That was an impressive dip into the Star Wars universe that satisfied all those “geeky” needs, without destroying the franchise, and sucessfully expanding it. I’m not going to get into original Lucas canon vs. new Disney canon, I just don’t care that much. All I know is that it was good, really good, and the entire movie didn’t even have a light saber in it. If I’m being perfectly honest, I kinda liked it better than Episode 7.

Raspberry Pi – I finally got on board the Pi train this Christmas. That was my present from my awesome wife and I love this thing. I loaded it up with BerryBoot (boot loader) right off the bat and created several partitions to play with. Raspbian was an obvious choice, but I also installed RetroPie and PirateBox as well. I’m also thinking about a PiRate Radio as soon as I can track down a jumper for one of the pins and a random length of copper wire. We had considerable fun playing old Nintendo games over the holidays with RetroPie and a USB knock-off of a SNES controller. I’m letting the kiddo learn the classics. The pure joy she had when she got the end of the first level in Mario was priceless.

Cards – Yes, I did get some cards throughout December. Those are sitting by the scanner for when I have a minute. I have a good sized SportLots order and a hobby box of Diamond Kings to share at some point.

BBQ – I finally nailed a perfect brisket. Do I get my Texan card now? Achievement unlocked? I’ve always been good with pork and ribs, but brisket took some serious practice. Look at that rendered deckle… 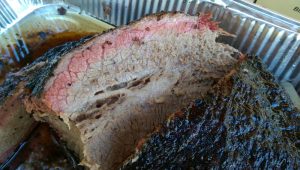 Customs – Last but not least, in my spare time, which is mostly single moments in-between emails, I’m still putting together custom cards. I’ve been able to recreate several BUNT designs that, at least in my opinion, should have been real physical cards and not just digital designs (he says, as he creates digital designs). BUNT Posters, Infinite and Heroes & Legends to name a few. I’ll show those off down the road. I’m also working on approximations of Panini Noir, 1966 Topps Hockey, FIRE, Goodwin Champions and BUNT Blueprints. 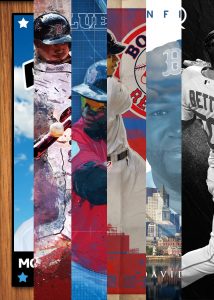