I’m calling it. I have completed it. Honestly, I thought I had it completed two years ago, but Topps has this lovely habit of extending parallels into infinity and not really mentioning it anywhere. If you’re wondering what the hell I’m talking about and why am I not just posting pictures of cards, let me catch you up.

Brock Holt’s defacto rookie card is in 2013 Topps, Series 1. Series 1 had not only the normal assortment of parallels…

…but also a wrapper redemption. That’s fine, I can find those on ebay, and I did. It took a while, but I had what I thought were all the variations of Holt’s rookie card. Then I noticed this…

Oh for Pete’s sake. For no reason whatsoever, Topps added a /25 “Sapphire” card parallel MONTHS after Series 1 had passed by everyone’s attention. Crap. I found a wrapper redemption in a few months in 2013, it took me two damn years to find this Sapphire parallel, but now I have. It is mine.

Before I post the cards, I’d like to point out that the shenanigans continues even further and that, technically, there is yet another card, but it falls into that “does it actually exist?” category. If you bought a factory set from Topps online, meaning you didn’t buy the “Series 1 and 2” combo box that’s most common at Target and Walmart, and instead purchased a promotional “Hobby Only” variation of the factory set, your set includes 5 “Orange Parallel Cards” from Series 1 and 2. In theory, there could be a Brock Holt card as an Orange parallel. That of course is only a possibility if you OPENED your sealed “Hobby Exclusive” factory set. Let’s be honest with ourselves, that card may exist, but the odds that someone would purchase a factory set and then open it are slim to none. Hell, if I BOUGHT a set, I wouldn’t open it either. So, we’re going to consider that card to be in the same camp as Platinum 1/1’s and printing plates. Unnecessary for an otherwise complete rainbow. Everyone with me? Good, let’s move on. 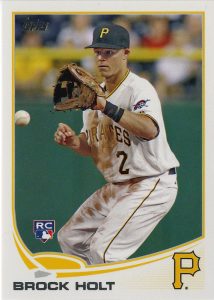 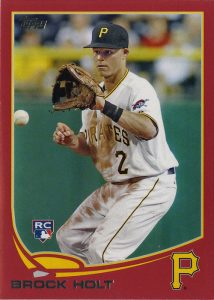 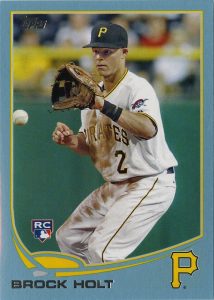 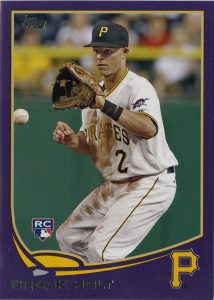 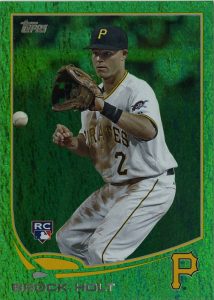 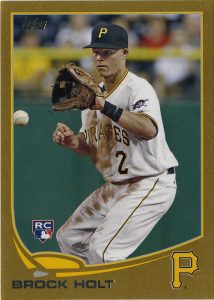 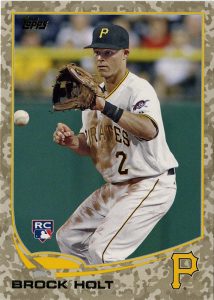 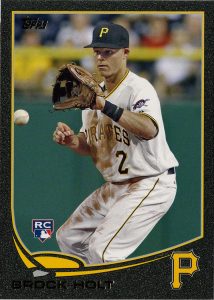 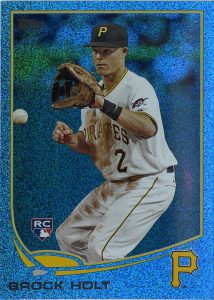 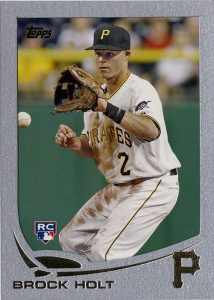 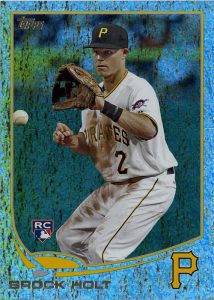 But wait, there’s more! Let’s include the hobby only mini’s and their parallels too! 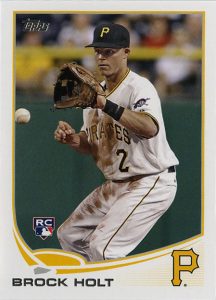 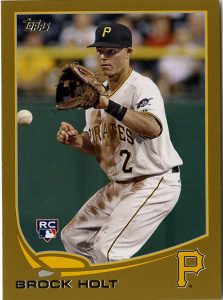 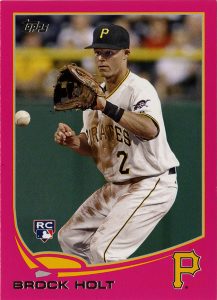 That’s it. That’s the whole thing. Of course I have ebay alerts set up on “Holt 1/1” and “Factory Set Orange”, but barring any late additions like printing plates, I’d say I can finally put this rainbow to rest. It’s my second complete rainbow and I’m 75% of my way to his Bowman Chrome rainbow as well. I just missed out on the /5 Red the other day. Always something left to chase. Collect on my friends!