Now that we’re finally deep enough into card season that releases are coming out every few weeks, I can catch up on my team sets. I know it’s not glamorous, a little boring, whatever you want to call it, but team sets are still my primary collecting goal. Not hits, not rookies, not individual players, but team sets themselves make up the bulk of my collecting. I also cheat and buy them rather than bust packs for them. A) I’ve never, in the history of ever, pulled all the cards I need for a set. Not once. I’m always chasing loose ends. B) It’s significantly cheaper. Buying a $12 team set and getting the exact 10, 15, 20 cards I need is considerably more economical than buying a $20 blaster and getting 2, or an $80 box and getting all but 3 (and then paying $3 each for those missing ones). 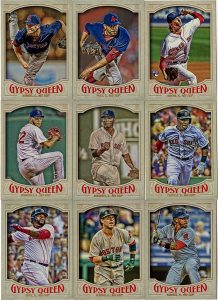 Ah Gypsy Queen. I have to say, the gray/red combo works this year. The last few years have been a bit questionable, but I’m liking these quite a bit. Probably helps that red is party of my team’s colors, so it’s a good accent color. I do have to question the photo choices though. Owens looks like he’s melting, Bogaerts looks likes he’s pitching, and Castillo looks like he just saw a kitten get run over with a lawn mower. 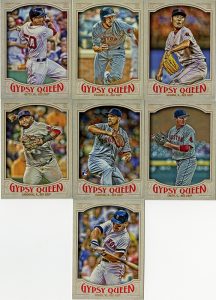 The rest of the base cards. Let’s not talk about how Sandoval looks like a confused ninja turtle and focus instead on how Mookie Betts is channeling his inner Jim Rice.

There were only four Sox players in insert sets this year, three of which were in “Power Alley”. I like the design, but nearly instantly the Ortiz card is out of date. I get that GQ is a combination of old and new, but they should probably focus on one or the other when making inserts based on accomplishments. It’s not like the frozen corpse of Ted Williams is going to hit anymore homeruns, while Ortiz is now beyond that 503. This would have been a great insert set NEXT year. 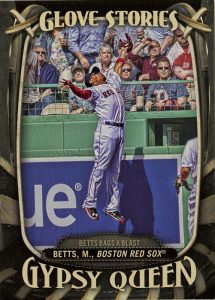 Last but not least, the single Glove Stories insert for Mookie Betts. Lets take a second to appreciate that awesome catch, and another second to wonder what kind of freak glove / botched photoshop job is going on at the bottom of the card. That look like any glove you’ve ever seen? 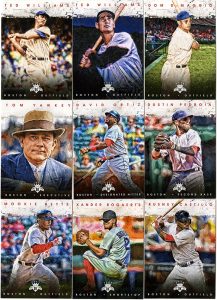 Diamond Kings! I mentioned in my Swanson hit post that I already had most of the team set. Technically I have all of it, if you’re not counting minis. I am counting minis, because I have issues, so there you go. I also have (as you can see), both versions of the Ted Williams card. I’m told one of them is a photo variation but to be perfectly honest, I have no idea which one is which. I think it’s the one in the middle. I also like the inclusion of Tom Yawkey. That’s not a photo that’s often used and it works really well as a card. Last, why does Bogearts look like he’s pitching, again!? That’s two sets in a row were it looks like the guy is going into a wind up. That’s just weird. 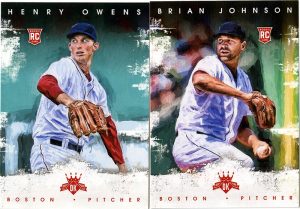 The two RC’s in this years set. Owens and Johnson. I think the border color swap was a little unnecessary, but otherwise I’m fine with these. 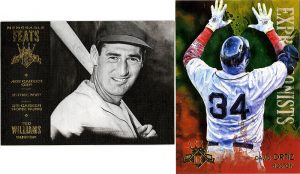 The two inserts. Memorable Feats for Ted Williams, and let’s just be honest, they could have just put “his career” on there and everyone would have smiled and nodded. As for the “Expressionists” card, I dunno. I have my issues with that one. I like the concept, but those are some poor color choices. That may be a candidate for a custom card remix.

All in all, both are great sets. So far they’re my favorites this year. Just need to track down some minis at some point (not to mention all the minis from years past that I never found – it’s a running joke). We’ll see what the summer brings!