Two of the Big Ones

It’s not every day you get to cross two cards off your Most Wanted list. One of these is relatively new, but impossible to find. The other has been on my want-list from the very beginning. 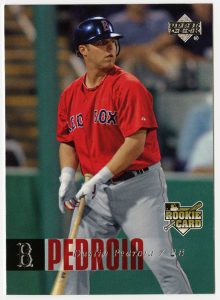 The 2006 Upper Deck Dustin Pedroia rookie card. When I started collecting again, my first collecting goal was to get a rookie card from all the important Red Sox players. For the majority of the team it was relatively easy. Two escaped me until today. The only other card I’m actively hunting as hard is the 1997 Fleer David Arias (Ortiz).

Today I can cross this one off my list. It was the first time I had seen an auction or a sale for this card start below $40. I knew it was an essential RC for a popular player, but I couldn’t have imagined that in 2006 Upper Deck was short printing anything, let alone a base card. Apparently so since this has been one of my white whales up until this point. 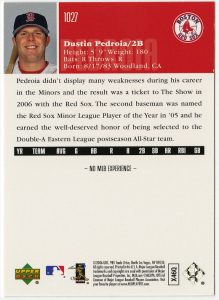 I love that the back says “No MLB Experience”. A true rookie card. That’s hard to say these days. Most guys have a little time back and forth, or cards that list their stats in the minors. I’m also pretty astonished that this is card #1027 in a set of 1250. 500 First series, 500 Second series and 250 as an Update, half of which was short printed and retail exclusive. No wonder this has been hard to find. That 250 card update series is 99% rookie cards, with a couple managers thrown in for giggles. If you’re looking for insanely hard to find RCs, apparently 2006 Upper Deck takes the cake. Topps, just for the record, didn’t have a Pedroia card in the flagship set, nor was he in 2006 Update. There’s one Topps 2006 card for Pedroia in “Topps 52”, and an insert, but that’s all. This, at least in my opinion is his true rookie card, and one I’m glad to finally cross off the “Most Wanted” list.

The other card I can cross off my list today is a bit different. Saying an “ultra rare” card is on your list is like saying “water is wet” or “the lines at Disney World can be long”. No kidding. Of course we’d all love an ultra rare card for one of our favorite players. It’s another thing entirely to have an active eBay search and incessantly check it every couple days like a crazy person. I’d like to say I’d never do that, but that would be a lie. 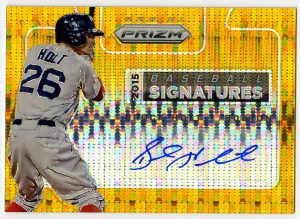 This gorgeous beast is from 2015 Panini Prizm. Don’t look directly at it for more than a few seconds. It’s like looking into the sun. It will scar you permanently. Holt didn’t have a card in 2014 Prizm, or a base card in 2015. He only appeared in this small insert auto set of 25 cards. “Prizm Signatures” they called it, and there were 6 variations. Regular (which was a refractor), Camo, Black & White Checkered, Tie Dyed, Red, White and Blue and this, the “Gold Pulsar”. Well, technically 7, but we’re not counting the 1 of 1. I’m sure I’ve showed off some of the other variations in the past. I had the opportunity of see a “Gold Pulsar” at a show for another player and I instantly knew I had to find one for Holt. 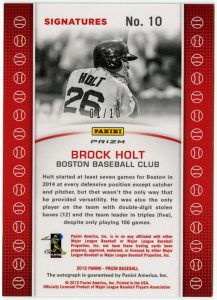 There was one on eBay for a solid year with a BIN of $199. That wasn’t happening in this lifetime, so I had to be patient. Eventually another turned up last week. Started at $0.99, and I was all in. Ended up paying about $25 but I’m trilled with it. That’s probably the second most I’ve ever paid for a card. I don’t care. Just look at the damn thing! The scan doesn’t even do it justice, and the scan is completely ridiculous. The back, while more subdued, is where the 1/10 can be found. Kind of a weird spot to put it, but I’m not going to be picky on this one. For the record, I’m still searching for the “Tie Dye” version, which I believe is /50, which makes it somewhat more likely I’ll actually find one, but this was the big one. This is quite possibly the most over-the-top, shiny, ridiculous card I own. I love it.