There’s several posts I’ve got lined up that deal with buying retail. It’s my closest option, it’s my only option if I want to buy something in person. In two of these posts I’m going to actually (hold on to something) give Topps praise for doing something right. This is not that post. This post is to illustrate when things go very very wrong.

Over the past month or two, I bought a couple blasters of 2015 Topps Baseball Update, as well as a couple boxes of the “Update Chrome” stuff. Normally I buy about one a month, during a normal Target run. On this particular day I bought two. I had just been paid, I hadn’t bought cards in a while, why not. Mostly I wanted the “Update Chrome” for the Chrome packs, which had that neat sparkle pattern thing going on this year. This is what I got… 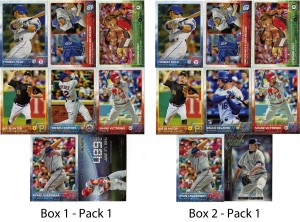 8 cards per pack, here’s the first pack from each box…

I didn’t realize what was happening until about pack 3, but I was thinking to myself “hmm, already got that Victorino card”. Little did I know… 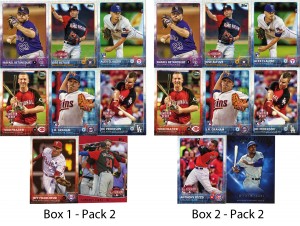 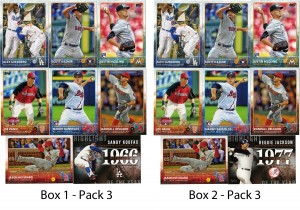 By now I’ve caught on. I normally option a pack and make a stack in front of me. At this point it was pack 3 of box 2, so I separated the two boxes worth and started looking back at what came out of box one. I wasn’t very pleased. I get the fact that these all come out of the same factory, cut from the same sheet, etc., but I always thought there was some sort of mechanism in place to help with collation of this stuff. A few duplicated cards isn’t a big deal. Heck, even if HALF the box was duplicated I doubt I would have cared. I would have chalked it up to just bad luck. Three identical packs in a row is a bit harder to take, but wait, there’s more…

Pack Four was mercifully different, there were only 2 duplicates (4 cards) in that one, it didn’t make it to the scanner. Pack 5 however, that came right back to the party… 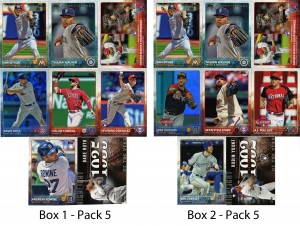 While both packs had a couple of different cards, the fact that the rainbow foil parallel fell in EXACTLY the same spot, in the same pack, in the same card order was a little too much. It’s just like buying a hobby box and knowing that the bottom pack on the right has the auto in it. Again, mechanical process, the machine is making the packs, I get it. I know there isn’t a human being putting packs into boxes in a specific order just to mess with me. Then again, maybe there should be. Maybe all the packs should convalesce in a big pile and non-machine workers should put them into boxes randomly. That’s probably too much to ask.

I consider it a good lesson learned. Never buy two boxes from the same shelf or shipment on the same day. I would shake my fist at Topps and tell them this is unacceptable, but I’m pretty sure they stopped caring at some point in the 1980’s.