Or, the Bowman Conundrum. Or, the Organizational Dilemma. Or any of a number of synonyms for “First World Baseball Card Problems”.

I’ve reached that point where I need to reconsider how I’m organizing my cards. Some of it is ok. Team sets and complete sets, by years, in binders. Got it. It’s everything else that’s the issue.

I’m just going to “talk it out”, and maybe I can wrap my head around it as I go. 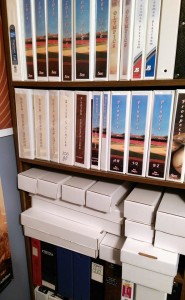 My primary concern is with those boxes on the third shelf.

This is where all the non-Boston cards live. What isn’t pictured, because it doesn’t actually FIT on the damn shelf, is a 6000-count Monster Box… 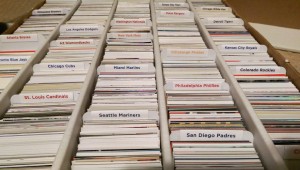 …which is nearly full. I took great pains to organize this last year and now I’ve out grown it. My plan was originally to put each team in a 660-count long box. Unfortunately that would take up quite a bit of room. That, and for some teams (ones that I tend to trade away more often) such as the Yankees, Astros, and Angels, it would pretty much be a wasted box. Why put 45 Astros cards into a 660-count box?

So, what if I then double some of them up? Astros and Athletics, with a divider in the middle. Well, then I have to label boxes, and then what if I outgrow those boxes, and have to scratch out the labels, and everything just looks terrible? Yeah, I know, I have issues. Plan B was to ditch the super-huge box AND the small boxes, and do three of the 2000-count “super shoebox” boxes (like the one pictured in the middle of that shelf). Three would fit perfectly in the shelf.

I have Red Sox hits in top-loaders in that one pictured currently, I’ll have to move them. My first thought was to put them into the Monster box, I’d have more room to expand the collection, win-win, right? 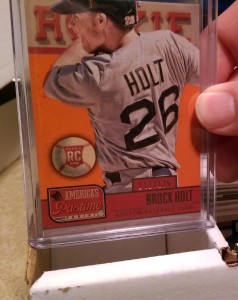 One problem. Top-loaders don’t fit in Monster boxes. I have no idea why a company (these are all BCW boxes) would make boxes for raw cards and slightly different sized boxes for cards in top-loaders. Why do I even own a box that can’t fit top-loaders!?! Mag holders aren’t any slimmer… 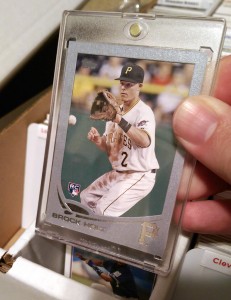 They don’t fit either. Crap.

Ok, so using the Monster box is completely out. I’ve been wanting to get rid of it anyway. I have 3 2000-count boxes to use instead, but I’ll still have no room for growth, and my Red Sox hits will need to be re-located. I’ll need to buy another super-shoebox, $10, not the end of the world.

What if I slim down the collection currently in the big box?

It’s a mish-mash of everything. Base, parallels, RCs, all sorted by teams. Here’s a random handful of Blue Jays… 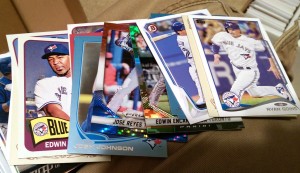 I could pull the parallels and put them in 660-count boxes, and the same with the RCs, but that leaves me with three separate places to check when looking for cards for a team. It would be a mess, but, it would solve my space problem. Solve one problem by creating another? Not such a great plan. Plus, what exactly do I pull out? Do I pull out ONLY a players really important rookie card? Do I pull out every RC or Bowman Prospect for every player? Do I pull out only those “hot rookies” that might be big one day? You can see my problem, hence the title of the post.

IF I’ve decided to do this, what qualifies as a rookie? What about parallels of rookie cards? Does rookie trump parallel, but parallel rookie trump both? Do I mean “rookie cards that have rookie logos” or do “Bowman 1st” cards count? If I don’t count Bowman cards, do I put those back in with the regular base cards?

This is a complete nightmare.

The only thing I can think of, and this isn’t even a good solution, is to simply take out cards that I think might be important, for players who might be important, that I think I might want to keep. That creates an insane grey area. With that in mind, I started going through the big box last night, and started pulling out some cards. Most of these I didn’t even know I had, which is a whole other issue. 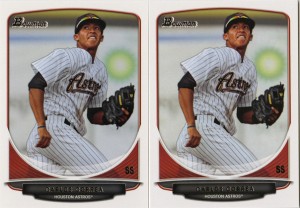 Two Carlos Correa Bowmans. Not technically RCs, just Bowman prospects. BUT, it’s widely regarded as being “the important RC”. Sam, correct me if I’m wrong, but Correa doesn’t have a Topps/Bowman card with an actual RC on it yet, right? Do these count? They seem like important cards for a budding super-star. 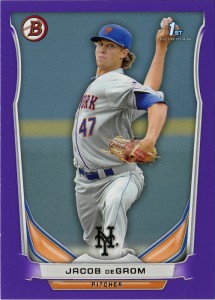 Bowman 1st card for Jake DeGrom. Great young pitcher for the Mets. Does it go in the parallel box, or the RC box? 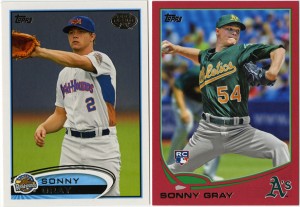 Sonny Gray, another young pitcher. One of each type of card. Do I split them up, one in each box? 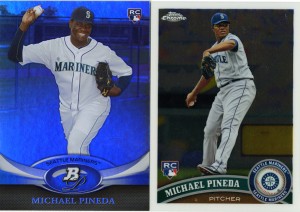 Big Mike Pineda. Both have RC logos. I guess those go in the RC box, but are they “important” enough to be set aside? Is Mike going to have a Hall-worthy career? If not, why am I saving these aside? 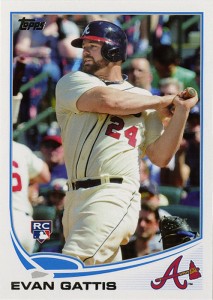 Evan Gattis RC. Doing well with the Astros. I’d probably hold on to it just for local value, maybe try and get it signed, but is it in the same league of “worth” as a Harper or Trout RC? 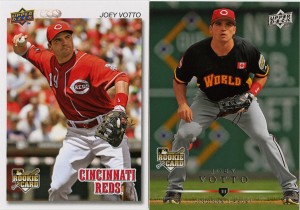 And it’s not just recent cards either. I’ve got a whole ton of cards like these. Joey Votto RCs. He’s been playing a couple years, he’s a Fantasy Baseball points machine, but do I save his RC cards? Are they super important?

All these sorts of cards are in the grey area.

How do you classify a card that seems important, but that isn’t important enough to take extra care of it? I wouldn’t bother sending an Evan Gattis RC to be graded, I just wouldn’t. Does that make it worthless?

There are some cards you know are important. Mike Trout’s RC from 2011 Update. Bryce Harper’s multiple RCs, that original Bowman Strasburg RC everyone went nuts over. Those get saved. These get saved… 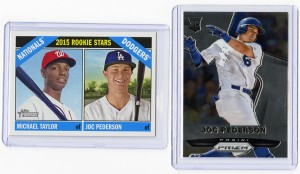 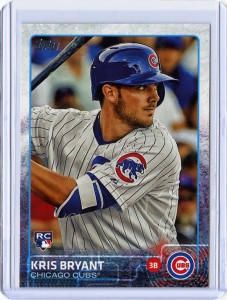 The real question is: For how long? When does a Kris Bryant RC become a Bo Jackson? Where is THAT line? 5 years from now? 10? What if he isn’t a super-mega star?

So, I’ve got these cards that I feel compelled to keep. I’m setting them aside, which is creating my problem. Let’s get back to organizing. Do cards like these get top-loaded, as if they’re hits, and stored with the non-Sox hits? Do they get put into long-boxes with only a penny-sleeve?

I think I’ve devised a solution. I call it “The Yard Sale Line” as in, the card version of the Mendoza line. Any card that might have potential worth, either to me or a friend, or fellow collector, goes in long boxes. Any card I deem to be important enough to handle with extra care (see Pederson, Bryant above) is at the same level as a rare-ish parallel and/or relic, and is therefor a “hit” and gets top-loaded and stored with the other hits.

Any card that is neither of those two things, and is merely a base card, goes in the large boxes. The theory being, if I wanted to drag those boxes out the next time I have a yard sale, I wouldn’t have to think twice if anyone offered to just “buy the whole box”. There wouldn’t be anything I would miss. It would be nothing but base cards and random inserts.

That’s all fine and dandy of course, provided that’s the plan I go with.

The other plan is to simply expand (with the new boxes), my monster non-Red Sox collection. Keep it still organized by team, but recognize that it needs to be tended like a garden. Every once in a while, go back through those boxes, as I did last night, and pull out cards for guys who “made it”. That would be recognizing that there’s a certain amount of “Bowman 1st” cards for players who might not even make it to the majors. If I’m not going to pull out every Bowman prospect card I ever get, this plan seems to make more sense. Literally keep doing what I’m doing, and keep an eye on prospect lists and call ups to the majors.

This would be the easier plan. It would require less work. It’s also less organized, but on purpose. Sort of “functional mess”, like my desk at work. Maybe that’s the part that appeals to my creative side.

Either way, I think I ordered boxes prematurely. I should have thought this out a bit more. Now I have, depending on my solution, 20 long boxes that are empty, or too few shoe-boxes.

Talking it out didn’t help.