On my desktop there is a folder. A folder called “Blog Cards”, into which I dump all my scans. There are currently 74 items in said folder, all waiting to be talked about. Some are common, some are random, some are just too awesome to stay unmentioned any longer. Those include the latest editions to my Brock Holt collection.
Let’s pause for a moment and appreciate the human highlight reel this kid is…

The only problem with Mr. Holt going from “pretty good prospect” to “the only guy in the lineup hitting over .300” is that his cards are now hot, and starting to become priced accordingly. I may have to go on a mini-spree and pick up a lot of what I have left before things get too nuts. I actually saw a Brock Holt auto (that I paid $6 for) priced at $79.99, which was higher than what the same seller had a Bowman Xander Bogearts auto at ($69). That said, I’m certain glad I jumped aboard this train before it left the station. Hell, the guy has his own fan sub-reddit.

Anyway, over the past month or two (geez, seriously) of neglectful posting, I picked up a couple really solid Holt cards but never really had that one super find worthy enough to pull together a post about. Now I do. Let’s do this! 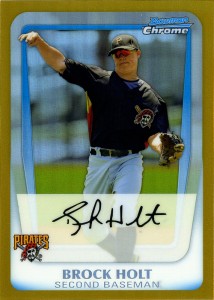 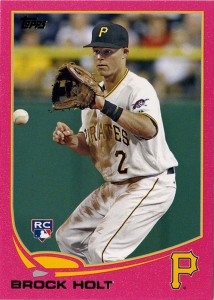 Next up, and also out of 50, a Hot Pink bordered 2013 Topps RC. I’m not crazy about the color, but I am crazy about this being one of the hardest to find parallels. According to Topps, there are Gold #/2013, Desert Camo Foil #/99, Black #/62, Pink #/50, and a Platinum 1/1. I actually picked up a Desert Camo as well and it’s on it’s way from the ebay seller. So, now I just have to find the Black /62. Weirdly enough, I also don’t have the blue Walmart or the ToysRUs purple parallel either. I could have sworn I had those, but they’re not in the binder. Anyone have those sitting around?

Anyway, not counting the 1/1’s, if the pink is the rarest, how do we top that? I’m glad you asked… 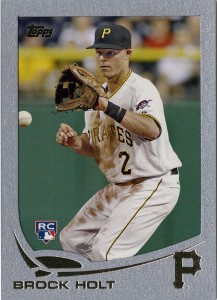 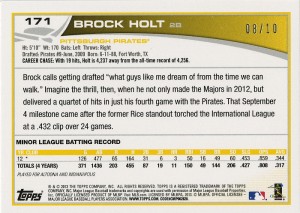 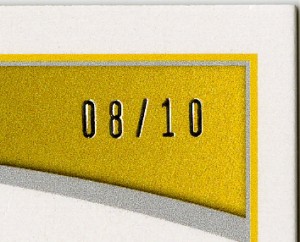 I now have SEVEN of the rarest Holt cards on the planet, including 1 plate and 6 numbered less than 10. I paid a little bit more than I wanted to on this one, but it was worth it. I’ve only ever seen 2 pop up on ebay and I lost the first one by pennies. I wasn’t going to let this one slip away. Now it’s mine, and it’s awesome.

Now that I have this beauty in hand, I’ll have to update my “Brock Holt Project Page“. Yes, that’s a thing. I decided to try something a little different with my personal collections. This was my test, and I think it turned out well. Eventually I’ll be making a few more pages for some of my personal collections. In the mean time, check this one out and let me know what you think of the format. Also, and this goes without saying, let me know if you have anything on my checklist.