Wait, what? Series 1, are you serious? Yeah, kinda. Heritage came out last Friday, and I’m so ticked off at it that I’m actually going to post a now completed team set for Series 1. Why? Because, while flawed at a fundamental level, at least Series 1 has the common courtesy to not bend you over with ridiculous short prints. I’ll get to that. 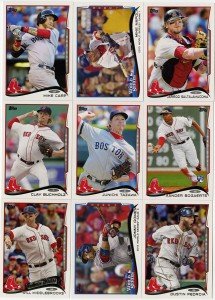 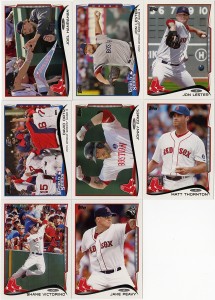 Series one, 2014. A mediocre, non-offensive design that everyone is just kind of “meh” over. It’s as if 2007 UD and 2002 Topps had a baby. Topps “swirly swoosh”, check. Upper Deck “tiny useless sidebar font”, check. What’s always amazed me is Topps’ ability to get rosters completely wrong. Sure, some people are still in free agency during the off season when the cards are produced, but why can’t you use the 20+ people with GUARANTEED contracts in the next year as the subjects for Series 1? Jarrod Saltalamacchia was going into the off season as a free agent, he was looking for a big pay day, why include him in Series 1 at all? Salty, Hanrahan and Matt Thornton are all gone. There’s simply no need for this.

Listen, this is an incredibly easy problem to solve. There’s 25 people on the active roster, right? 25 x 30 = 750. If we’re stuck at 660 (or 663, or whatever), that means 22 cards per team. 11 per team, per series. EVERY roster carries at least 11 players with non-expiring contracts. About 3/4 of the Red Sox roster is signed past 2014. Series 1 should be the “100% certain” players. Series 2 should be the rest plus off season additions. Update should be in-season trades, all-stars and call-ups. This is not rocket surgery!

The only thing I can think of, from Topps point of view, is that they want to space out the “super stars” to sell more Series 2, which doesn’t make any sense since Series 2 sells better than Series 1 anyway.

That brings us to Heritage, and my huge problem with it. It’s a 500 card set, with 75 short prints and a metric ass-ton of variations. Short prints, in and of themselves, aren’t my problem. It’s the subjects on them. Every major super-star and/or hot rookie is a short print. Every team MVP. Every Ace. Puig, Jeter, Ortiz, Strasburg, Bruan, Darvish, Myers, Verlander, Cabrera, Scherzer, etc, etc, etc. The list goes on and on. The only two I’m surprised at are Trout and Harper, who are mysteriously regular base cards.

The entire concept of a “set” is destroyed when the flagship players of said set are so hard to find that they’re only available on the secondary market. What are my odds of pulling a short print? 1:3 Hobby packs. HOBBY PACKS. 24 packs per hobby box. That’s 8 per hobby box. If I don’t get any dupes, that would take me 9.5 hobby boxes to get a complete set. That is the very definition of bullshit. Heritage exists for 1 reason: set collectors. People who are enjoy collecting things like the original 1965 cards, are the target audience for Heritage. Giving people 75 short prints to chase is like telling them to go hunt snipes. 10 boxes (because, let’s be honest, you’ll get dupes) is $750. That’s fucking horse shit. Especially when you consider that a “Master Set” on ebay is currently around $175-200. How would this entire strategy possibly help Topps sell boxes? Or am I missing something? Is the allure of “busting packs” worth an extra $550? It must be nice to have that sort of disposable income.

I’m also a bit bent out of shape because 3 of my team set players are short prints. THREE. Ortiz, Pedroia and Lester. And not to mention that “action image variation” SSP for Ortiz. Also, why on earth is Ellsbury a Yankee in the regular set, and a Red Sox in the chrome set?!?

So. There. I bought a team set, not including short prints, from Brent Williams, and won a “World Series Inserts” set for $1.25 off ebay. I’m done. I’m done with the bullshit that is Heritage. It’s a shame, because I like the 1965 design more than just about any other Heritage set to date, but the proposition of “dealing with it” just because I like the design simply isn’t going to fly. If I get traded the short prints at some point down the road, awesome. But I’m not going to go out of my way to pay $8 a card for them any time soon. Screw that.

So, back to Series 1. The set that at least shows it’s flaws right up front. It knows what it is. It’s the lowest end of the spectrum. The vanilla. The base. It’s not trying to parade around like it’s high-end aggravation wrapped in a short-print bow. 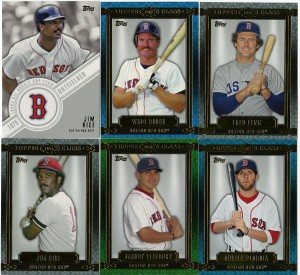 Inserts! Inserts that make no sense! See, Series 1 is so clueless, it considers Ellsbury and Fred Lynn more “Upper Class” than Ted or Yaz. That’s ok, because Teddy gets some love with more useless inserts…

Clearly they only have 1 photo of Jim Rice. These are nice inserts, on the thicker stock, but it just seems like leftovers from last year. 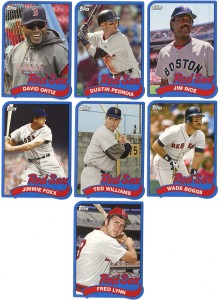 Minis. So terrible it’s really hard to quantify. Anyone else notice that they skipped 1988? Last year we had ’87 minis. This year it’s ’89. Not only is 1989 one of my least favorite years/sets/designs in the history of forever, but they’ve decided they need to be diecut too. Why? Why would you do that? Now they’re just awkward to handle and they still don’t fit in anything. And 7 of them? Seriously? Jim Rice is getting a lot of love, which is nice, but did we really need to trot out the corpse of Jimmie Foxx some more? Save that stuff for Gypsy Queen please. Two current players out of 7 is just sad. No Napoli, Lester or WMB?

So, Series 1 is a complete mess, but it’s an expected mess. It’s what we’re used to. It’s like waiting to get feedback on a project you know is completely messed up. You expect the worst, and just hope it’ll get better with the next go round. Heritage is just a money grab.

Series 1 is the village idiot. The harmless idiot, who’s always been around, but is good for a laugh once or twice a year. Heritage is just a dirty, stinky, money grubbing, loan shark. 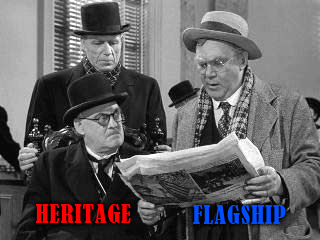