One of my more significant presents for BirthdaMus was a hobby box of 2013 Gypsy Queen. I had finished the Red Sox set, minus a couple minis, and I had bought a complete set (minus the SPs) from Sam when he was busting boxes. So, those were the two big things I was looking for. Minis and SPs. I didn’t manage a single mini, and only 3 or 4 SPs, but I did get not just my four hits, but one of them was pretty awesome. 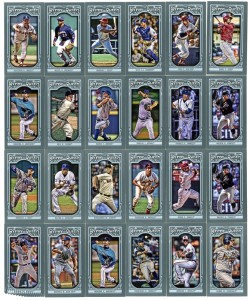 Let’s start with the minis. Out of 24 packs, I pulled 24, regular base, regular back, minis. One was slightly damaged, which isn’t terribly surprising, but what IS surprising is the complete lack of not only different colored parallels, but of even back variations. No SPs, no “un-numbered”, no “Gypsy Queen” backs, nothing. You usually get at least one parallel in a blaster, so I find it incredibly odd that I didn’t pull a single black, green or sepia. Oh well. I won’t dwell on it, I’m not building a mini-master set anyway. 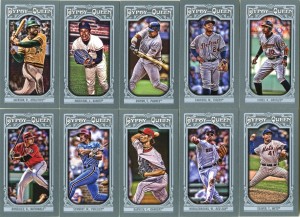 Next up, the mini “variations” from the box topper pack. I already had the Middlebrooks, but the Darvish and the Cabrera are pretty nice. 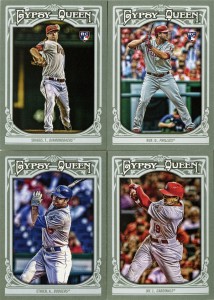 These are the 4 short prints that I already had a copy of. I need to go back through and update my SP list, but I’m pretty sure I only added 4 or 5 to the binder. I’ve said it before, but I absolutely LOATH the fact that they put these in the middle of the set. If you want to make a 1-300 set, and have 301-350 be short prints, fine, I’m ok with that. But when you have every 10th card be a damn short print, my binder has huge holes in it. It just pisses me off to even look at it. This has definitely turned into a “finish it out of spite” sort of project.

What I did pull however was a couple of the inserts cards that I needed. I think I’ve finished off “Glove Stories” and “Dealing Aces” now, but I need to double check my lists. Just a couple more to go. 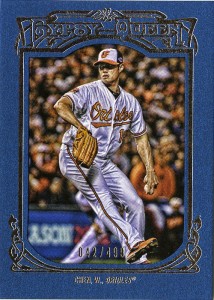 The one blue border parallel I happened to pull. A nice Chen, numbered 042/499. Not too shabby. 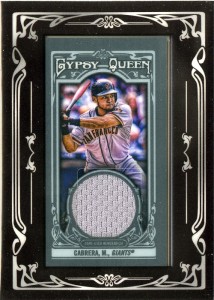 First of my hits, a nice framed Cabrera relic. Note, thats a Melky Cabrera, not a Miguel. 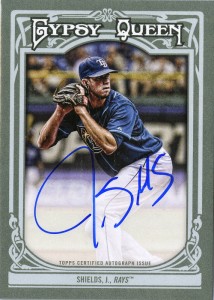 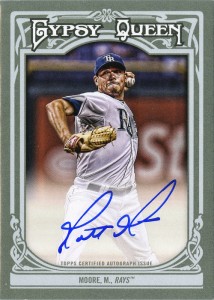 If I was a Rays collector, I would be over the moon about these two. A double Rays auto box. Matt Moore and Jimmy Shields. You could certainly do a lot worse auto wise, those are two nice pulls. I’ve always loved that GQ has on-card autos. They just look so much better. Random fact: That is NOT a blue Sharpie that they use to sign the cards. I did a little digging one day and I found the archival pens they actually use. I might have to post a little bit about my detective work another day.

Now for the big hit…. 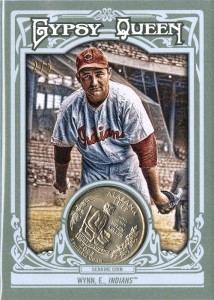 Numbered 2/5, a “Hometown Currency” relic for Hall of Famer Early Wynn. Who is Early Wynn you might ask? Well, apparently the “most linkable player” according to Baseball-Reference. He’s literally the “Kevin Bacon” of baseball. I had not known that. He actually is a Hall caliber player with 300 wins, a Cy Young Award, and 8 AS Game appearances.

The next big question is what to do with this. Admittedly, I’m not an Indians collector, or a “Alabama” player collector. If anyone knows anyone who is, send’em my way. Otherwise, I think this one might be bound for ebay or COMC. Thoughts?