A couple weeks ago, Crackin’ Wax had his first big case break. He busted all but one box of Series 1 and raffled the final one away. I bought both Red Sox slots in the break, hoping to not only get a team set (which I did, x5) but to hopefully get a good chunk of the inserts, parallels, etc. I figured, for the price of two blasters, why not. I’d be buying way more than that trying to do it via retail. Good call on my part. Here’s the loot. 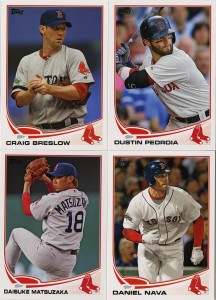 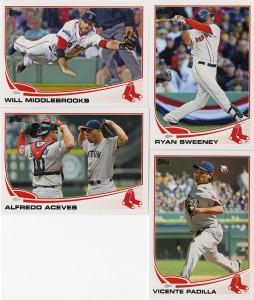 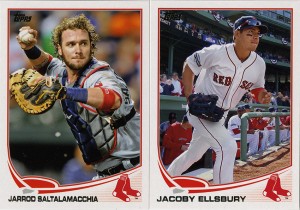 First up, the base cards of course. I actually pretty surprised by a number of these. Dice-K for example, why is that card even produced? He hadn’t signed, he was still a free agent for most of the off season. Just last week he signed a minor league deal with the Indians. So, why on earth does that card even exist. Having a player in the wrong uniform I can understand, sometimes people sign or get traded too late to change production, but he flat out isn’t on the team. Ryan Sweeney is another question mark. He wasn’t offered a contract in November. At the end of January, long after the printers started running for these cards, he signed a minor league deal. So, again, why does that card exist? Surely there were 10 people, guaranteed to return from last year, that could have been used instead.

Series 1 always confused me. It seems like they create more work for themselves, and more things to “fix” in Series 2 and Update. Here’s a thought. Kill off “Opening Day” and make Series 1 come out around the same time as the start of Spring Training. You’d have a much better idea of rosters, and Update could focus more on called-up mid-season rookies. Win-win for everyone.

Regardless, as just about everyone on the planet has already mentioned, the design isn’t bad, the photography is great, and I’m generally excited about Series 2.

One interesting thing that caught my eye before we move on with the cards. I noticed this in the corner of the Ellsbury card. Ouch. 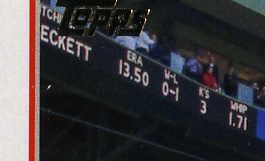 Inserts, as a whole, I’m really happy with this year. There isn’t 50 of them, the designs don’t suck, and they actually add something to the mix. The “Calling Cards” are probably my favorite, but that’s probably because they went retro/art-deco with them and I still drool over Ginter/GQ from a design perspective.

Next, minis. I know this is a dissenting option, but I can’t stand these. I don’t like 1970’s designs, and ’72 is probably one of my least favorite. I’m glad Topher pulled all three in the break, because I certainly wasn’t going to buy any just for the sake of completion. I can live with them, they’re better than the ’87’s, but still not my favorite. All in all… Meh. 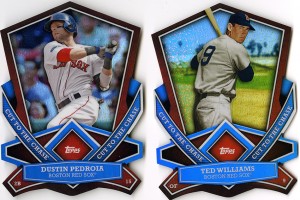 Now, THAT is how you do an insert. I know, I know, how can I hate ’72 minis and love cheesy “gimmicks” like a diecut? I don’t know, I just can. To each their own. I think these things are awesome. It’s probably the best addition, insert wise, to regular Flagship in a long long time. Love’em. 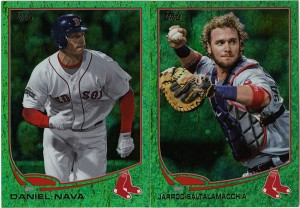 These are the two Emerald parallels that he pulled. These, along with 3 I happened to find via retail, mean I just need 5 more to have all 10. Not too shabby. Might actually try and track those down at some point. I don’t really have an opinion on the green one way or the other. It’s not bad, especially with the Sox cards, but it’s not quite as cool as a red “ruby” parallel would have been. Or a blue diamond. They don’t bother me though. 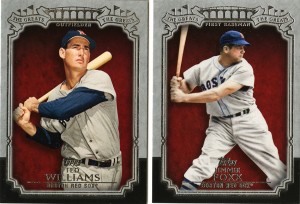 Next, two hobby only inserts. “The Greats” were, and pardon the pun, a “great” idea. A little higher-end, nice thick cards, reminds me a lot of Museum or 5-star. I think that was a nice treat for hobby customers. I cheated a little on this one though. Topher pulled the Williams, I picked up the Foxx off the E of Bay. 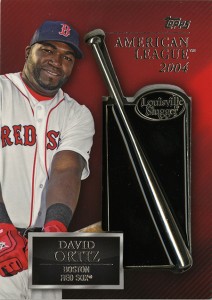 Last, but not least, the most insanely thick card I’ve ever seen, short of a booklet. It’s nuts. It’s at least 300pt thick. That little reproduction bat is set so deep in there, it’s cavernous. Incredibly awesome card, and I’m really happy it was pulled, I just don’t have any earthly idea what I going to store it in. Right now it’s in a snap-case. I guess that’s the best place for it until someone comes out with a big enough top-loader or mag-case. Awesome card.

So, that’s the team set at the moment. Great break Topher, can’t wait for the next one.