Two weeks ago, I was out looking for Series 1 at Walmart. I was a day or two early and struck out on that, but I did pick up one of those “Best of 2012” repack boxes that everyone was talking about. Why not. 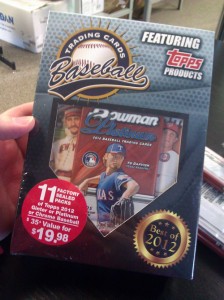 For starters, it had Bowman Platinum right up front. Since the first step is admitting you have a problem, well, that pretty much sold me on it. 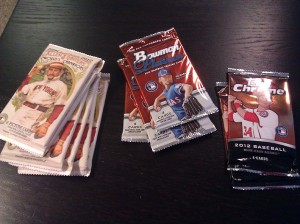 Six packs of Ginter, 3 Platinum and 2 Chrome. I was hoping for more BP, but at least it was heavier on Ginter than on Chrome. I’m still hating on Chrome this year.

A couple random Ginter cards for my personal collection. The rest were fairly uninteresting. Well, until I came across this… 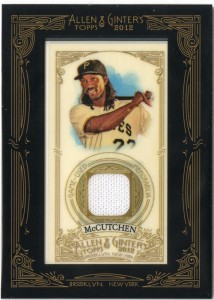 Nice. The pack searchers must have missed this one. Nice Ginter relic of a top-10 outfielder. Not too shabby. 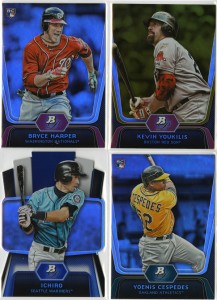 Platinum wasn’t bad. I managed to get the last two base cards for my 2nd set (yay! Set complete!!), a couple RCs, a Youk gold parallel, Ichiro diecut… Oh, and a redemption for an auto! 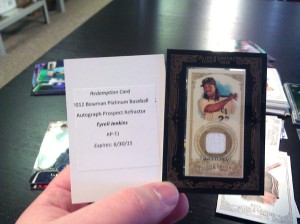 Autographed prospect refractor of Tyrell Jenkins. Had to Google him. Apparently he’s a top Cardinals pitching prospect who just got called to Spring Training this year. Not too bad. I redeemed it, so if anyone is interested in trading for it, it’ll be in soon (aka: whenever Topps gets around to it).

All in all, not that bad a box. At the price of a blaster I got two fairly decent hits. I’m not sure I’d buy too many more of those boxes, but I certainly wasn’t disappointed in this one at all.