I have zero will power when I’m sick. I normally have to have electronic devices capable of accessing ebay or amazon removed from my field of vision while I’m under the weather. This time the culprit was retail. I honestly walked in looking for Robitusin and/or Nyquil, probably both. I walked out with rack packs and a blaster of Bowman Chrome. Why? I have no idea. I don’t even like Bowman Chrome. On the up-side, I pulled 3 auto from Bowman Platinum, severely beating the pack odds. The added benefit for you guys is that everything is up for trade too. 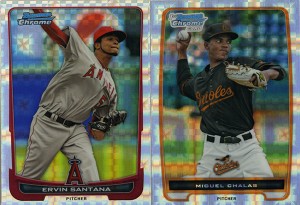 First up is the Bowman Chrome. Never being a huge fan of Bowman and/or it’s Chrome counterpart, I have no earthly idea was possessed me to buy a blaster of it. There’s like 20 cards total in the entire stupid box. It’s like a buck a card. Sigh. What’s done is done, but there’s only a couple cards worth mentioning. These are the two X-fractors I pulled, an Ervin Santana and a Miguel Chalas. 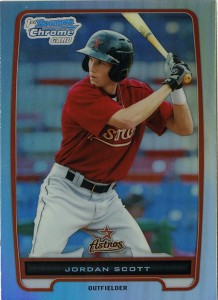 Next, a single regular refractor, this Jordan Scott for the Astros. 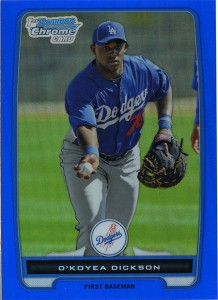 Next, a colored border parallel. O’Koyea Dickson for the Dodger, #’d /250. The blue border works well for the team in this case. This one looks pretty nice, the blue is very vivid. 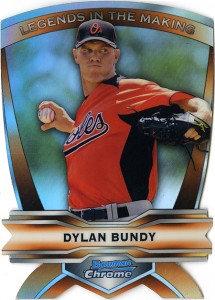 Lastly, a Dillon Bundy diecut for the Orioles. I was on board with the diecut trend this year, I like these, they look pretty impressive.

Now on to the Bowman Platinum. I noticed that my Target had those hanger rack packs on sale for $5.99 instead of the normal $9.99. At $10, a rack pack is about the worst per card value of them all, but at a little more than half that, it’s nearly blaster cheap. You can get 3 for $18, which gets you 6 packs plus 3 packs of purple parallels. I grabbed what they had left. Here are the purple parallels and a couple of the chrome refractors… 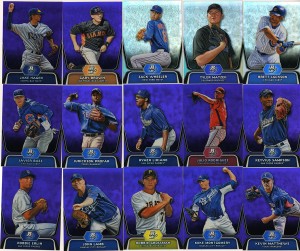 A couple for the Cubs, Rangers, Royal, Padres and a couple others as well. I know people are pretty high on Hager and Wheeler as far as prospects go as well. 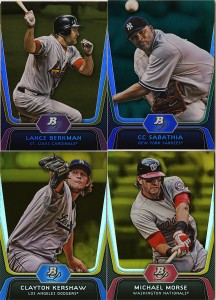 Next, the colored parallels. Berkman, Kershaw and Morse Gold parallels and a Sabathia Green parallel. 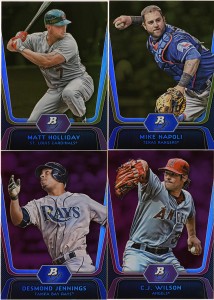 Holiday and Napoli Gold parallels and a Jennings and CJ Wilson Ruby parallels. 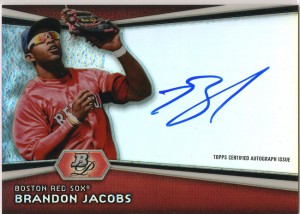 Now, having bought 18 packs total, and pulling 3 autos, that’s 1:6. Not too shabby for retail. I’ve had really crazy good luck with retail BP this year. I think I pulled a total of 6 or 7 autos and even a redemption (that’s still pending at Topps, grrr!). Anyway, first up is actually a Red Sox prospect, Brandon Jacobs. This is my 3rd Jacobs auto, so this one is up for trade if any fellow Sox collector needs it. 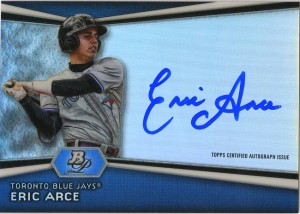 Next, Eric Arce. Yup, ARCE. Sigh. Listen, Eric, you know that once you get called up to the majors, having them announce “now batting, ARCE” just isn’t going to fly right? lol. “Arce flies one deep into the gap, going back back back, its outta here! Arce, touch’em all!”. On the other hand, you’re autograph is the only one that’s actually legible, so, umm, keep it up! lol. 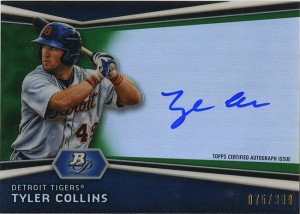 There you have it folks. The things I buy when I’ve got “medicine head”, I tell ya…