Well, with the regular baseball season coming to an end, and the playoffs about to start, that means that fantasy baseball has come to a close. A big congratulations to Derek from Tomahawk Chopping for his first place finish! 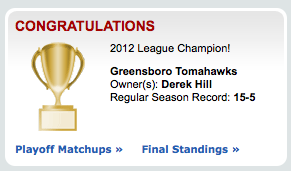 Derek’s record of 15-5 was also the best in the league and he had a sizable (10-game I think) winning streak at one point. Also, congratulations to my father, Mark, for his 2nd place finish, just a single game behind Derek and only 17pts away from the championship. I’m sure I’ll hear about that for the next 6 months, lol. Thanks Derek.

Myself, I came in 3rd, narrowly missing the championship game by just 20pts the week before. I think that shows the benefits of starting over and re-drafting occasionally. Plus, the changes I made to the rules this year, in my opinion, helped keep the teams fairly even.

The points for/against columns tell a tale of much closer matchups than the over all records show. For example, even though I ended up 12-8, my pf/a difference was nearly identical to Derek, meaning we had nearly identically lineups. I love stats.

Anyway, a big huge thank you to everyone who played this year. I think we all had a lot of fun. I know I did. Fantasy Baseball is one of those things that helps me get into the game more, and actively pay attention to all the teams, not just the Red Sox.

Thanks again everyone, and now it’s time to kick back and watch the real playoffs. It’s going to be an awesome October.