Last week I worked out my first trade with NightOwl. I actually received the cards before the 4th, but I took some time with the family over the weekend so I’m just now getting back to posting. For my part, I sent some Dodger goodness his way and he repaid me in Red Sox. 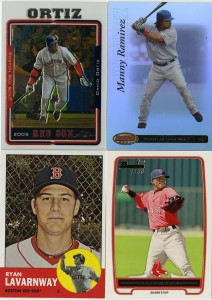 First up, another 2012 Bowman towards my team set, a very nice Ortiz chrome and a nice shiny Manny Bowman’s Best. 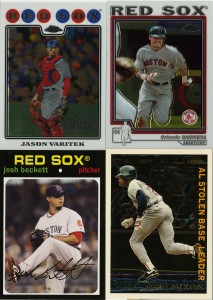 Next up, a couple more chromes for my older sets, a retro looking Beckett from Archives and an actual semi-retro Otis Nixon. 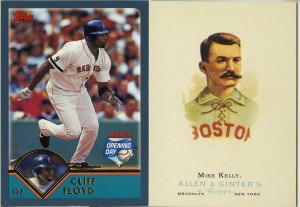 A nice blue parallel (numbered to 2003) Cliff Floyd and a A&G Mike Kelly from the “Boston Beaneaters”.

Next, the Boggs insert from Series 2 and a very nice Canseco Fleer Flair I didn’t have. 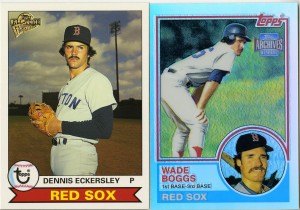 And, for the real meat of the trade, my two favorites. Eck “Topps Fan Favorites” from (I think) 2004 and a reprint refractor Boggs from Archives. I didn’t even know I wanted that card, but it’s really awesome. Love’em! I wasn’t paying attention to the Archives checklist, so I didn’t even know they were doing refractors of some of them.

Awesome trade good sir. Looking forward to another! Thanks Greg!