July Break Loot plus a Trade!

Another month, another awesome break from my good buddy Sam over at the DailyDimwit. This time he was busting Goudy, Unique and SPX. Just before he started opening boxes we worked out a trade for something extra special. You might have seen his half of the trade here, but here’s my loot. 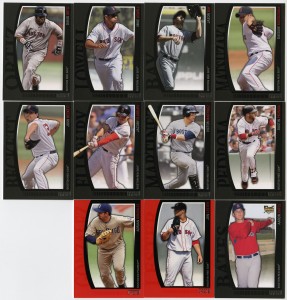 This was my second break with Unique in it. I really like those cards, and now, with that Aaron Bates in the corner, my team set is finished. Also, a nice little bonus, I got that red Adrian Gonzalez from his Padres days, as San Diego was my 2nd team. 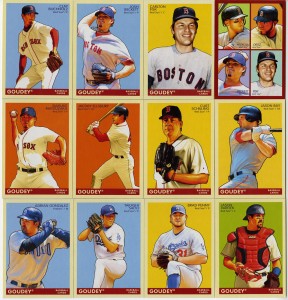 Next up, ’09 Goudey, which I think I had already finished previously, but I think I had somehow missed that Fisk shortprint. Most of these are dupes, so if any other Sox collectors need a couple for their own set, just let me know. Again, more Padres luck and another Gonzo. 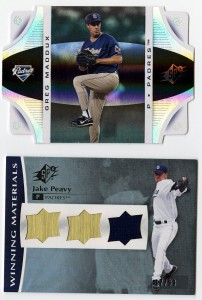 Now on to SPX. Yup, just TWO cards. Both Padres. Not a single Red Sox card in the box. It’s statistically to be expected, 3 base cards per pack and only 10 packs. Still, I can’t be upset, I got one of the nicer jersey hits from the break. A nice dark blue Jake Peavy, numbered 17/99. Not too shabby!

Lastly, the trade I mentioned.

I knew Sam had pulled one of the better autographs out of 2012 Gypsy Queen since he bought a metric ton of the stuff. There are just 4 Red Sox autos in the set, and I already had the Danny Bard. That just left Gonzo, Crawford and Pedroia. I had given up hope of getting any of those. The closest possibility was Crawford, who’s prices seemed to dip while he was on the DL this year, but even then his auto was about $20. The other two I considered completely unobtainable. When I found out that Sam pulled one of them, I knew I had to find something awesome to trade him. I scoured the interwebs and came up with 2 autos and 3 relics he (somehow) didn’t already have. He agreed to a trade and included this gorgeous beauty in with my trade loot… 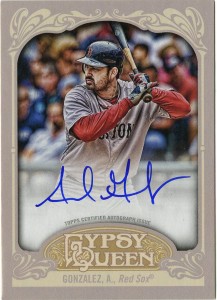 YES! Epic auto. My first Gonzalez auto. I’m super geeked out about this one.

Also, because Sam is awesome, he threw in this little guy from Archives… 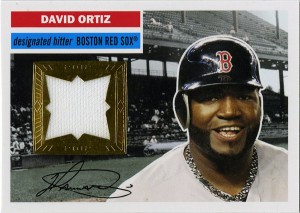 Very nice! I didn’t have any of those yet either. I like the look of these, a lot nicer than the generic S1/S2 relics. The gold border makes it.

Thanks again Sam! Perfect break, and trade, as always! Can’t wait for next month 🙂