Ginter, ginter, ginter. There, you happy now? I said it. It’s like you can’t not say it this time of year.

In 2010, I decided to start collecting baseball cards again. The very first thing I bought was 2010 Allen & Ginter. I blame Sam. Well, not completely. I asked him what was fun to collect, and he was right. 2010 Ginter was a lot of fun. I got my team set, a couple relics, had some fun. Then 2011 happened. I did not have fun. The distribution was terrible, beyond the normal terrible we all routinely complain about, it was just plain ugly. I opened, in back to back blasters, the same (even down to the mini) identical pack. In 3 blasters I got a total of TWO pieces of Carlos Pena’s pants. That’s way more Pena pants than anyone outside of the man himself should actually own. I said to myself, “well, this sucks, forget Ginter”, and promptly moved on to last years Gypsy Queens and Topps Chrome. I disliked just about everything about 2011 compared to 2010. I told myself I wasn’t even going to look at 2012. Then I saw the design. Damnit, they actually improved it. I really like Art Deco. It sucked me back in. Then I looked at the checklist. Half the number of crappy non-sports cards, also a plus. Better auto/relic selections, a plus. Damnit, I was going to buy Ginter again, I could feel it.

Then I did. Just one blaster, just to be sure… and I got this. 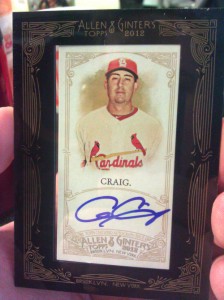