So, when my wife asked me what I wanted for Father’s Day, 3 things entered my mind. A steak, Uncharted 3, and some baseball cards. I’ve already had my steak, and Uncharted 3 is on it’s way via Amazon. The Series 2 hobby box she got me however, showed up early, and she let me bust into it and spill it’s cardboard goodness like a parallel stuffed piñata.

I enjoy metaphors way too much. lol.

I got the obligatory jersey card for my hit, but also managed a black border /61. I scanned and sorted the whole box this morning. If you’re in need of something from Series 2, or are just trying to knock off you’re team set, let me know.

Let’s start with some base cards, just because. A little side collection I like to do every year is to try and Franken-set my Fantasy Team. I had a good number from Series 1 already, but here are a couple from Series 2. I think it’s a fun idea for a mini-collection. 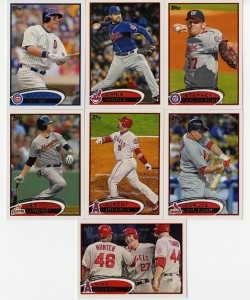 A couple more random cards. I have started holding onto the occasional non-Red Sox card, just because. I don’t do it often, mostly just for the occasional rookie card. Oh, and the Manny is just for nostalgia sake. 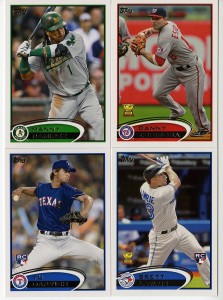 Last of the base that I scanned, the Red Sox cards. I was pretty disappointed not to pull the majority of a team set, but I’m in a group break this weekend that should hopefully finish it off.

Alrighty, now it’s time for the inserts, of which there are way too many. It’s a little insane. Topps, you’ve seriously got to knock this off. Starting with my least favorite first. Golden Moments. They’re just boring. It’s a shame this was the design they designed to use for the relics and autographs as well. 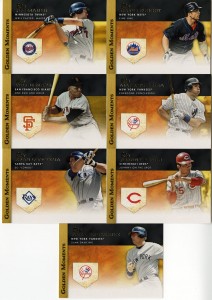 “Gold Stadard” up next, another boring insert. 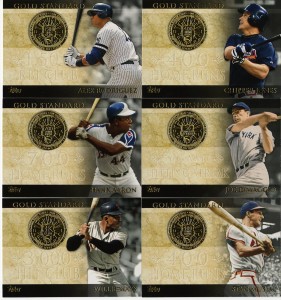 New to Series 2, “Mound Dominance”. I like the idea behind these, but that “Pitch Trax” BS in the middle is already annoying when I’m watching a game, I don’t need it on a card as well.

Next up, “Career Day”. These aren’t bad, they’re much stronger in the design aspect, but they suffer terribly from the same “unused space” issues as most of the inserts, but the idea is pretty good. 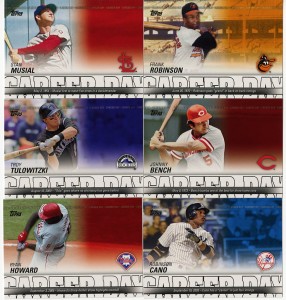 These I actually like. “Gold Futures”, highlighting some up-and-coming rookies. Much stronger than all the previously mentioned inserts by a wide margin. 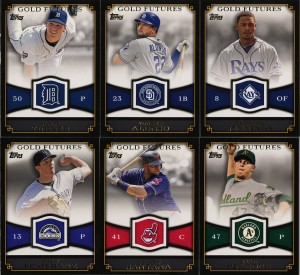 New to Series 2, Topps is experimenting with die-cuts again. These are “A Cut Above”, and solely feature top-tier talent. Not a bad bunch. I’m liking the Nolan Ryan in the old-school Astros uni. 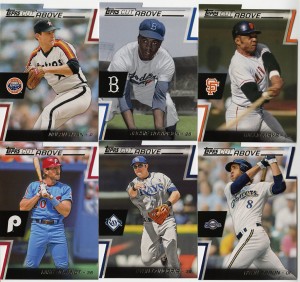 What set would be complete without something sparkly and metallic. I still want to call these liquor-fractors from last year, but I suppose they’re a slightly different color, so we’ll just go with “gold, sparkly bullshit”. 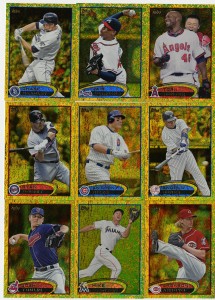 Lastly for the inserts, the minis. I’m torn on the ’87 minis personally, but I know a good number of you guys love’em. I think I pulled a pretty good group. 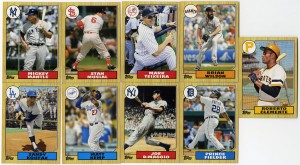 Ah, so now we’ve come to the “hits” portion of the program. I use the term fairly loosely. I’m a) confused and b) aggravated by the “hobby box” vs. “jumbo box” concept. So, let me see if I have this right: You can by a “hobby box” and get 1 non-guaranteed (as to what it is) hit, and lots of base cards, OR you can get a “jumbo box” clearly designed to give you a metric ass-ton of base cards (essentially for set builders) but get MORE hits, and guaranteed ones at that? Wouldn’t a box, oh I don’t know, for THE HOBBY, be the one to have the good hits in it? When I think of “jumbo” I think of french fries. What does a jumbo size get you? More fries! Not better quality fries. Not fries plus 3 guaranteed onion rings. That would be stupid. A “hobby box”, to me at least, is synonymous with “premium”. The “good stuff” comes in a hobby box. At least it should. Maybe I’m wrong about this, but the boxes should be about the 300 cards vs 500 cards. You want more base cards and maybe 1 or 2 hits, you buy the jumbo box. You want less cards, but more hits, you buy the “hobby box” designed for people who enjoy the hobby.

Sigh. I digress. Really I’m just venting because I only pulled Yankees cards. 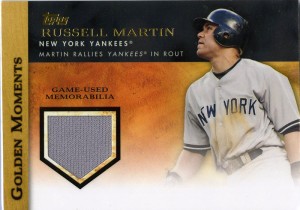 Russ Martin. At least it’s not a Yankee that makes my blood curdle. Russ seems like a pretty stand-up guy, and a good catcher. So no hate here. Just wish he was wearing a different uniform. Oh well.

Last, my single “hobby only” parallel. Guess what. Also a Yankee. 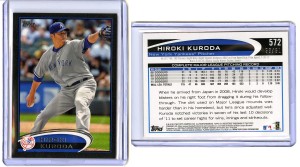 Hiroki Kuroda, 39/61 black border. These, in person, are actually pretty cool. The black border is metallic, but subtly, like the way black car paint is metallic.

So, anyone want to take these two off my hands? Anyone?

Despite my griping, I really enjoyed opening the box. It’s a blast to see what’s in each pack and to look across the whole set. That’s what it’s all about right, just appreciating the cards for what they are. It might “only” be Series 2, but it’s still fun in my book.

I hope all the Dads out there have a great weekend! Happy Father’s Day!