With the concept of “hack-and-slash” dungeon crawlers completely entrenched in gaming lore as a sub-genre to the all-encompassing “RPG” category, and with Diablo 3 and TorchLight 2 right around the corner, I thought I’d take a minute to highlight a little indie game that I’ve become completely addicted to.

Dungeon Defenders, by Trendy Entertainment, is a hybrid Action-RPG and Tower Defense game. Even most non-gamers have played a tower defense game. Desktop Tower Defense, Plants vs Zombies, FieldRunners, Flash Element, Immortal Defense, and GemCraft all fall into that category. It works a little bit like this:

You select one of 4 basic characters (Apprentice, Squire, Huntress and Monk – younger versions of the more familiar “Wizard”, “Knight”, etc) and start off with the ability to use your weapon and put down the most basic of blockade. The enemies enter the level at point A (usually a door) and make their way to point B, your base, or in this case, your “crystal”. The crystals are what you’re defending. With them the monsters can take over, rule the world, etc, the usually good vs. evil sorts of stuff.

So, between point A and point B, it’s your job to stop the monsters. You set up traps, blockades, weapons and all sorts of things in their path to try and kill the monsters before they reach (and destroy) your crystal. For example, my Squire can set up spike blockers, harpoons, and turrets. More in line with the characters persona, my Apprentice (Wizard) can set up fireballs, lightning traps and the like.

As you progress, your characters stats improve, you get new abilities, new traps and new weapons. You get stronger, your traps get stronger, and you can take (and receive) more damage. Also, the enemies frequently drop armor and weapons, which you can also use to improve your character.

What Trendy has done is build a deep RPG like level system, with loot and collecting, on-top of a really fun tower defense mechanic. I’ve always been a fan of the tower defense genre, and Dungeon Defenders scratches all those itches and more.

The graphics, powered by the latest Unreal engine and bright, colorful and very well polished while leaving enough scalability wise to be played on older and slower systems. I can play DD equally well on my new Mac Pro, Macbook, Gaming PC, older PC and there’s even a version for Android/iPhone as well. Thanks to Steam and SteamPlay (cross-platform support), I’m able to do all of the above from a single account, having only bought the game once. Not only that, but it’s incredibly cheap. The entire game is $5. You can also buy add-ons, where I would suspect their real money comes from, for a couple dollars each, consisting of everything from new characters, extra maps, even fun holiday themed stuff and the occasional poke at pop-culture (there’s a Romney vs. Obama addon). The default maps and characters will do you just fine though, as you get at least 30 levels, with 6 levels of difficulty, ensuring a ton of re-playability. If that wasn’t enough, each level also features “survival” mode, which never ends and the monsters just keep getting harder and harder.

For the hardcore players, there’s also TrendyNet, an online only section where players can play “ranked” matches with other players for glory, stats and loot. If online competition isn’t your thing, you can simply play against the computer on your own machine (as I do). Dungeon Defenders is great for killing 20 minutes here and there but can also turn into multi-hour gaming marathons if that’s more your style.

At the end of the day, it’s $5, it’s a ton of fun, it’s a good time waster, and Trendy really hit a homerun with it. The occasional Steam-Sync issues aside, it’s just about as close to a perfect game as you can get for under a Lincoln. 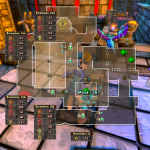 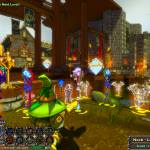 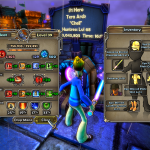