So, Saturday I had a couple packages waiting for me in the mailbox. One was a neat collection of Red Sox stuff from Kyle at JABO that I’ll post about tomorrow, and the other was my contest winning box from Beckett.

For those of you just tuning in, I was randomly selected to win a box of 2007 UD Artifacts. I had left a comment on a video and a couple days later, here we are. So, a big thanks for those guys over at Beckett for making that happen. Clearly they’re pretty much the industry standard for price guides and their grading service and trading forums are nothing to sneeze at either.

Anyway, I fired up the old FlipHD and recorded a quick box opening. Enjoy.

Scans after the break. 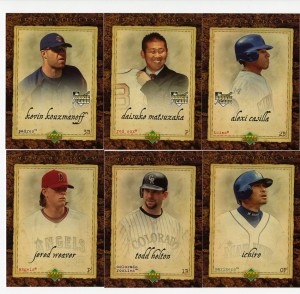 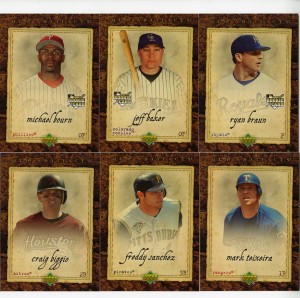 A quick random sampling of the base. As far as I know, there are no parallels in the set, so it’s just base and hits. There are quite a wide range of types of hits however. 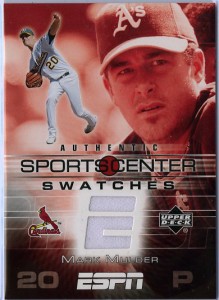 First up, a Mark Mulder “SportsCenter” Swatch. I’ll be the first to admit, I have no idea what this is. I know EPSN had a short-lived set of cards, and I’m assuming (because of this one) that Upper Deck produced them, but why this is in a box of Artifacts is lost on me. In typical fashion, we have him in not one but two photos wearing an A’s uniform, and the card lists him as a Cardinal. The swatch is of course white, so there’s no telling which on it’s from. Very confusing card all the way around.

Update: I looked up the card, it’s actually from 2005! I officially have NO CLUE why this was in the box. Anyone care to enlighten me? 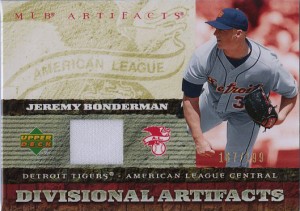 AL “Division Artifacts”, #’d 167/199, Jeremy Bonderman for the Tigers. Bonderman was a long time pitcher for the Tigers and I believe he’s actually a free agent at the moment. He played 7 seasons for the Tigers before having some sort of weird blood clot and going on the DL “indefinitely” according to wikipedia. 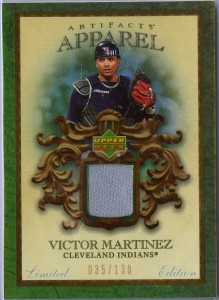 Next up is an “Artifacts Apparel”, #’d 35/130 for Victor Martinez. Nice looking card. Very refractor-ish and gold foiled in the background. This is probably my personal favorite out of the box, but the “biggest hit” is still probably… 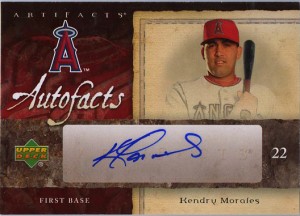 None-numbered “Autofacts” signature for Kendry Morales. I really like the look of this card, and Morales has a neat signature. Book value wise it’s probably the highest out of the four, not that that matters, but auto beats jersey any day.

Anyway, I had a blast opening the box, I got some great stuff that’s all up for trade. I’ve got to update my tradebait page with some new stuff anyway, so I’ll make that a priority this week. Shoot me an email if you’re interested in any of those, even the base cards.