Mail Day from the Bay

Another week, another smattering of little yellow bubble mailers… well… except for that jerk that charged me $3 shipping and sent me a card in a PWE with a single stamp on it. Seriously, eBay people, nothing will get you a crappy rating faster than sending things in a PWE. Now, if shipping is free, or $0.50, or something like that, sure, that’s understandable. I’m getting what I paid for. I would gladly pay you an extra dollar for a better envelope if given the option. Just don’t charge me like you’re going to send it first class in a mailer, and then put a $0.43 stamp on it. That’s not cool. 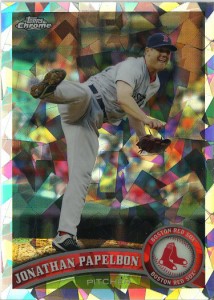 Let’s start with the PWE victim. Thankfully it wasn’t super rare or special. Well, it’s kinda special. It was in a top-loader, which was it’s only saving grace. It arrived fairly unharmed. I hadn’t picked up any of the “atomic refractors” from last years Topps Chrome, so this was my first, and I have to say that in person they’re really pretty cool looking. I know, I know, it’s gimmicky and they’re just introducing false rarity, but just look at it! It’s all sparkly and shiny and stuff. Plus you get a nice “nut shot” from Paps, lol. 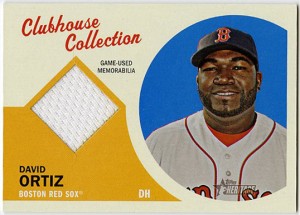 Next up, another $0.99 special. I figured since I already had the Cole Hamels for tradebait, I might as well get one for myself. My only problem with this one is that I clearly bought a pack searched relic, and that kinda ticks me off. Unless someone else can tell me why there are “press marks” and creases around the swatch, I’m going to assume someone “squeezed” the pack to find this one. Here, I enhanced the color so you can see it better.

The scan on eBay wasn’t clear enough to see it, but the crease runs all the way from the “H” in Clubhouse to the “Z” in Ortiz. It’s pretty blatant. I hate this sort of thing, because at $0.99 it’s not worth fighting about. Stupid pack searchers. Don’t they know that they’re ruining the cards just to find them. Makes me sad. Then again, I should have known… 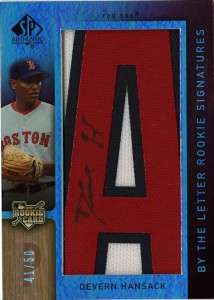 Quick story about this one. Although I failed to mention it in my own recount of the cards from JABO’s Group Break #4, you can see the redemption card for this one in his scans here. It was clearly expired by years, but I thought it was worth trying to contact Upper Deck anyway. My perception was that theses were sitting around in a box somewhere, waiting to be claimed. According to the company, that’s not true. I called, twice, and spoke to a couple very nice and very helpful people, but they both gave me the same corporate “line”. “With the loss of our MLB license, we’re unable to produce any more baseball cards”. My reply, of course, was that they were already “produced” back in 2007, so they wouldn’t be violating anything by distributing what they had already created. One girl actually told me that, in fact, the cards were not produced until someone redeemed them.

I find that incredibly hard to believe. Trust me, they did NOT create card #41/50 and not 42, 43, 44, etc. Just think about that for a minute. The official story from the Upper Deck company is that letter patches, a combination of fabric, patch, card and autograph, are created INDIVIDUALLY as requested. Nope. Not buying it. Why would you create D E V E R N H A and not N S A C K? That’s stupid. So, long story short, no one at Upper Deck felt like tracking one of these down, which is completely understandable in it’s own right, it is 5 years expired. But to use the “we can’t, the MLB won’t let us” and “we didn’t even make them yet” as the OFFICIAL excuses is just weak. Just tell me it’s too far expired, I’d be ok with that. So, anyway, eBay did for $0.99 what Upper Deck couldn’t do, you know “because of the license”, and now I have one.

Last but certainly not least, I’m posting this bad boy full size because it’s awesome, and because I can. Team USA Auto/Jersey, #414/799 for Mr. Bryce Brentz. I had been trying to get my hands on a Bowman Sterling Bryce Brentz auto for months with zero success. This guy was sitting at $0.99 for 5 days, so I jumped on it and got lucky at $2. The next one that sold after it went for $30. Is that dirt on the jersey? Why yes, yes it is. I’m going to go ahead and consider this one I trifecta. It might not have a RC logo, but a Team USA logo is just as good in my book.