So, if you remember back, one of my goals for the card show was to buy a hobby box of something. I didn’t know what I would find there, so I kept my options open. I was hoping for a box of Upper Deck X but never found one. There ended up being plenty of stuff to choose from. It was the end of the day, I only had $100 left and I knew I couldn’t afford something crazy like a box of Triple Threads or anything. So, I was trying to decide between the cheaper products and two caught my eye. A box of 2006 Upper Deck Future Stars and a box of 2007 UD SP Authentic. I had participated in Sam’s group break of Future Stars so I was familiar with it. Five rookie autos were the selling point and from a personal perspective I really liked the look of the cards, especially the autos on the clear plastic. The SP Authentic was familiar, but I didn’t have any 2007 personally (just 08 and 09) and I knew there were at least two of the the Letterman patches in there. It was also on sale, so that helped. I almost decided to skip the SP Authentic and get 3 jumbo boxes of regular Topps base (09 and 10 I think) but I convinced myself that a) I didn’t really give a crap about the base b) there were no guaranteed hits and c) Letterman patches were cool. So, SP Authentic it was.

From a personal “I’m collecting this set” perspective, I got boned. Out of the two boxes I pulled a grand total of FIVE Red Sox cards. FIVE. No hits either. I was hoping for the Papelbon RC auto from Future Stars and at least a Dice-K rookie from the SP Authentic. I didn’t get either. I did pull the 5 autos and 2 patches, so I didn’t get shorted on anything, and there were quite a few nice cards, just nothing that fits with my personal collecting goals. So, what does that mean? Well, that means you guys probably made out better than me. Let’s break down what WAS in the box…

That breaks down to 96 cards total. 24 World Baseball Classic inserts, 5 auto and 67 base cards. The collation on this box was terrible. I received 1 Red Sox card in the entire box. It was a Manny Ramirez green parallel which I didn’t already have, so that was at least a plus. I already had the whopping 4 card team set from this product, so I was really just in it for the autos. I was rolling the dice. What surprised me the most was that, after opening everything and sorting them into teams, there were only 15 teams represented. If I was hosting a group break, it would be conceivable that people could have walked away with ZERO cards from this box. Of course, in typical fashion, the box was also loaded with Yankees. I have 4 Johnny Damon’s, in the wrong uniform, leaving a stain on my desk at this very moment. If you’re interested in your team, feel free to leave a comment and make an offer. I’ve got base cards from the:

Now for the more interesting stuff. I’ve got 18 non-numbered, base WBC cards, including a near team set of Team Japan (minus the Dice-K, which I’m keeping), and a WBC Team USA Chase Utley card as well. Then there’s the numbered ones… 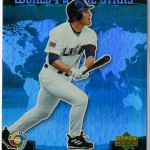 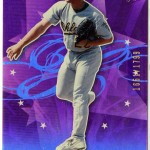 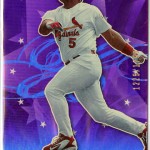 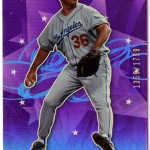 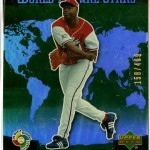 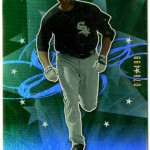 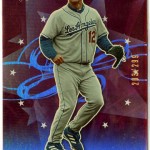 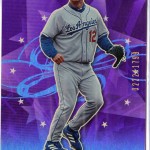 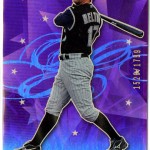 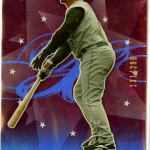 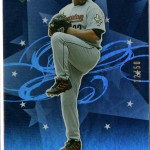 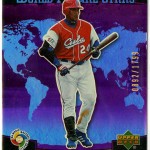 Not pictured is the green Manny parallel that I pulled out prior to scanning and forgot to include with these. The brings us to the autographs. These were kinda weak, but there were two nice ones, one mediocre one and, unfortunately, two really terrible ones that I doubt anyone would ever be interested in. That’s just the chance you take when buying RC autos though. Sometimes they just don’t work out. 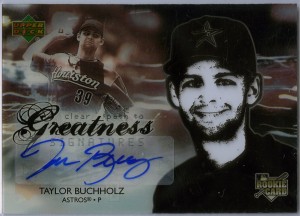 Yikes, a Taylor Buchholz auto. Yeah. Somehow I doubt this one is going to see a lot of interest. Poor guy. 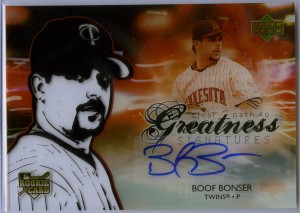 BOOF! Best name in baseball. If only he could actually pitch. 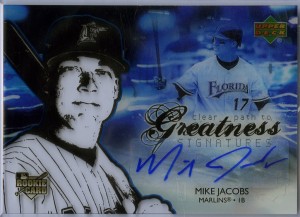 Slightly better. Mike Jacobs had a couple good years with the Mets and the Marlins, then kinda fell apart and tested positive for HGH last year. 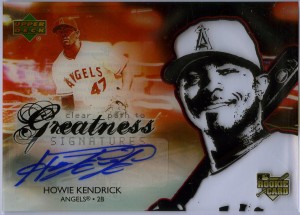 Ah, that’s better. After a shaky start Howie had a real solid 2011 and even landed on the All-Star team. He hit .302 down the stretch and the Angels just signed him for another 5 years. 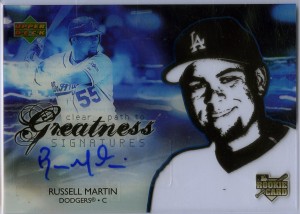 Last but not least, one that Greg might be interested in, Russell Martin. 3 time All-Star, Gold Glove winner and, much to the Dodgers fans disgust, current starting catcher for the NY Yankees.

24 packs of 5 cards each in a 100 card base set. 2 Letterman autograph patches and chance for on-card single or double autos.

What I didn’t realize about this set was there were hardly any parallels. The couple of years following this, for each card there were at least a couple levels of numbered variations. in 2007 the only parallel to the base card was if it was signed. There was only 1 insert set, “Authentic Speed/Power” (depending on the player) and then two sub-set autograph sets, “Signs of the Times” and “Chirography Autographs”. So, what we get in the box, if you didn’t get any of the other autos, is nothing but base cards and 2 guaranteed patches, which are the real draw. With a 100 card base set however, and 96 base cards per box, if you don’t get too many dupes, you’re almost done with the set completely. I can’t decide, since I only have 4-5 dupes, if it’s worth it to find the missing 10 or so cards and have a complete set, or if I should just break them up and give them away. We’ll see. You’re more than welcome to have an offer for you team’s set though, I won’t take that off the table. I think there’s representation of every team in this box, it was just better collated than the Future Stars. I don’t really have any scans to show off of anything other than the patches. There’s no inserts, numbered cards or short prints worth scanning. The Letterman patches however. Those are epic. I think I lucked out on these two. 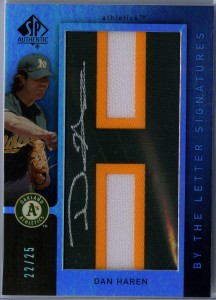 Dan Haren, while he was with the A’s, numbered 22/25. Nice. Pretty decent pitcher, starting rotation with the Cardinals. Not too shabby. The book value on that one is about $20 and is selling appropriately. 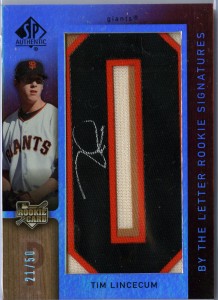 TIM LINCECUM, rookie, Letterman patch, numbered 21/50. SWEET. That’s even pre-crazy hair Tim. Out of all the Letterman patches I could have pulled, I pulled the BEST ONE. At least in terms of book value. That card books for $150 and isn’t selling for anything less. HOLY CRAP. That’s the best pull I’ve ever personally made. Ever. I’ve got a couple cool cards now, but nothing I’ve ever pulled out of a pack comes close to that. Wow.

I don’t know if I should sell that one, or hang on to it. Thoughts? So, how did I do for my first hobby boxes???