Well, we had our fantasy baseball league’s draft last night. I got a number of the guys involved as well as my brother and my old man. We had a great draft and I think everyone ended up with some good players. The very first pick I made was for the entirety of the Boston Red Sox pitching staff. I have a pretty good feeling that this year they will be at least a very solid performer and at best pretty fucking fantastic. After that I was able to grab up Youk, Ortiz, and Hunter Pence, all guys I figure will have pretty big years. Not a bad lineup if I do say so myself. I’m a little weak at 3rd base and I don’t have a good backup catcher, but I think some trades could be made if needed to fill in the holes. I also picked up not only Jeter but Damon as well. I was planning on benching Damon, just on principle, but it looks like Ichiro will be on the DL for the first couple weeks, so he might get some play after all. Anyway, here’s the lineup. 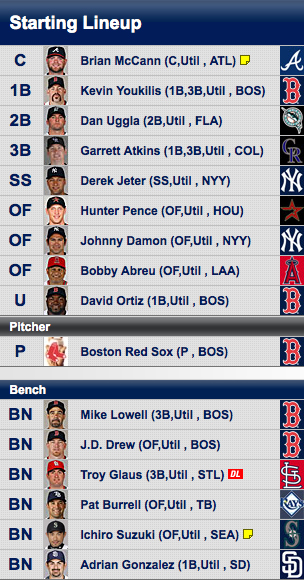