So, I don’t know exactly what to do with this mess of a website. Don’t worry, it’s not going away. I mean from a technical aspect. This entire site is running on WordPress, which until now has not only worked well, but I’ve championed numerous times as the blog platform that most if not all people should be using. This theme (Divi) however, is both bloated and unreliable. I haven’t been able to change anything structurally without breaking it for several versions now. On top of that, I had created this custom child theme (that’s what you call it when a theme is derived from a larger “parent” theme) so that I could customize it, because that’s just my jam. I’m in IT, I tinker. I void warrantees.

For those that don’t know, back in WordPress 5 they introduced a “block editor”. With it you could build pages and posts with “blocks” of content types. Images, titles, paragraphs, tables, etc., each a block and each a separate element. Divi chose not to use these block, but to build their own WYSIWYG editor. It worked for a while but now the technology “fork” has diverted so far from the original it’s having a lot of issues. At this very moment I’m typing this into Notepad because the Divi Builder won’t allow me to edit the page beyond pasting plain text into it. Any other button or option crashes the builder and I lose the post. That’s no way to blog.

So, my choices are:

A) Uninstall and reinstall Divi, again. – Zero guarantees it would work, and I’ve already tried it in the past.

B) Stay with WordPress and find a different theme – The downside to this is that everything Divi is deeply embedded in “shortcodes”. I’d have to sanitize EVERY post, going back 20 years, and remove the shortcodes to make “plain” pages again. Additionally, I’d have to learn an entire new framework, builder and the Gutenberg block system, something I’ve been avoiding for several years now. It’s become one of those “well, it’s not going away, better deal with it” problems.

C) Convert the entire site to a different blog platform – The option I’m edging towards is Ghost (ghost.org). The problem with Ghost is that it’s harder to run (need to configure my VPS differently), it doesn’t directly import content from WP, I’d have to export, sanitize and import a huge JSON file (see option B), and I’d have to export the content from here which would require at least 2 paid plugins based on the size of this site and the number of images (you seriously don’t want to know).

I’m leaning towards trying those, literally in that order, and only stoping once something works “better” than it does currently.

What does that mean for you the reader? Well, old school “construction zone” signs for a little while. With my zero free time, this will either take a day or two… or 7 months.

We’ll just have to see. 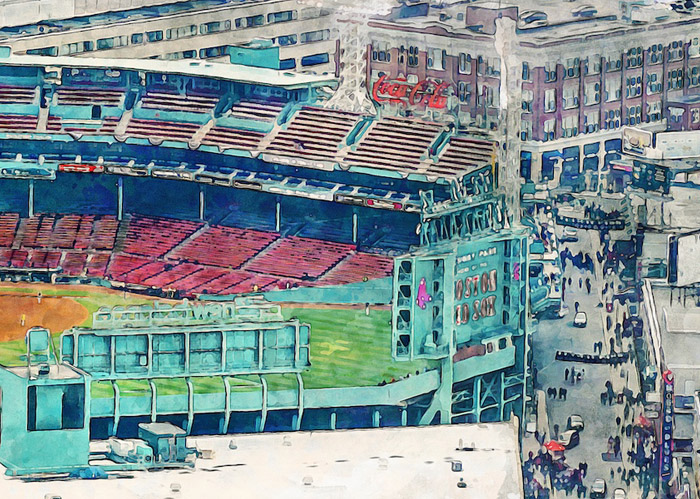 What year is it?

What year is it?

…no, seriously. I have no idea.

I just looked back and apparently the last time I posted something was last June. It’s April now, so that’s a solid 10 months, which is ridiculous. Not that anyone reads these (except for the 3 or 4 of you who are awesome human beings), but more like I missed talking to myself. Maybe it’s the “personal journal” aspect, but there’s a lot going on that doesn’t fit nicely into a blog about baseball cards. Not that it was ever primarily about baseball cards. It’s still a blog about life, and man, sometimes life just gets busy.

We got a cat. That’s a thing that happened. I never thought I’d actually type that. I’m allergic to cats. Well, most cats. Apparently, there are a few hypoallergenic breeds, and we happened to find one. Technically he’s a mutt, but his dad was one of those breeds, so he’s at least 51% not bothering my sinuses. He’s actually the nicest cat I’ve ever met, which is saying a lot, because cats are usually assholes. They are.

I had a bunch of projects, both work and personal. The company full embraced work-from-home and that’s a big deal with IT and how we remotely support all our employees. We had a bunch of systems in place already when the pandemic hit, but we (the IT guys) have had to become instant experts in Teams, OneDrive, VPN configurations, RDP support, etc. It’s been interesting, challenging and a huge learning experience, all things I enjoy.

Art wise, 2021 was technically slower than 2020, which was odd because you’d figure 2020 would have been THE time to sit at home and do some creating. I did all sorts of various projects, but whereas 2020 had a few dozen, 2021 only had a couple, but they were large. 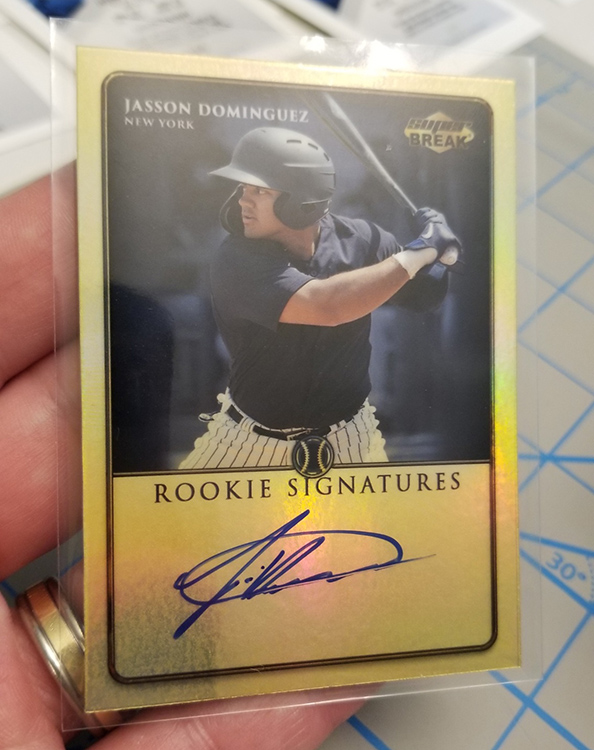 My favorite one was a custom set of cards for SuperBreak featuring 1/1 autographs for Yankee’s prospect Jasson Dominguez. Yes, that Jasson Dominguez. In late 2020 I had created a design for an autograph opportunity, and we sent them off to Dominuez’s agent in Florida. He signed them and returned them, but then we ended up sitting on them until we were able to get more card making supplies due to pandemic shortages. A couple months into 2021 and I was able to start making cards again.

I did 6 sets numbered out of 5. Gold, silver and blue. Then I did 20 unique 1/1s. I pulled out all the stops, found the craziest patterns and colors for foil, and did these completely meticulously by hand. I even hand cut them with exactos because I wanted to get the cuts perfect and my trimmer has a slight margin for error.

These ended up going in what I think is SuperBreak’s current product “2022 Super Glow”. Check them out here and here.

I also ended up creating an entire set of “historic memorabilia” cards that’s as-of-yet been unpublished. It was a huge 60+ subject checklist with single, double and triple relics. I’ll save those for another time. 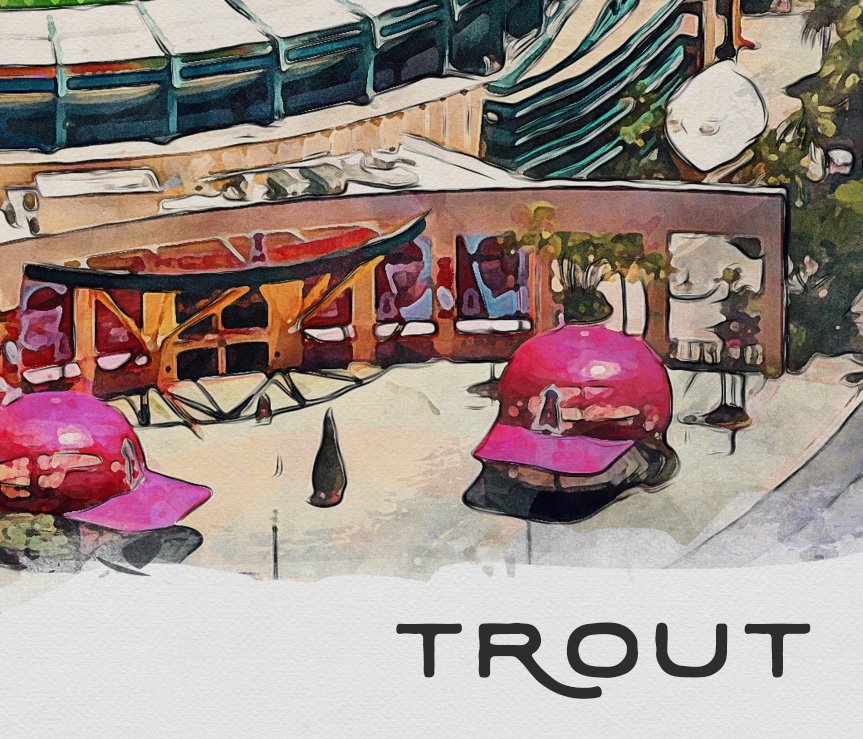 Lately I’ve been increasingly happy to be working on my own designs again. After meeting up with some old college friends last month, I realized my need to create for my own sake has never, and most likely will never, go away.

Having switched jobs from a 90% creative roll into a 5% creative roll and completely technical field I realized I really missed it. It’s funny that when I was creating for others I was getting burnt out on it and was feeling “done” with corporate design. Now that I don’t design 9-5 every day, I can get back into it for all the right reasons, because I love it.

At the moment I’m working on posters/minis (yes, that’s a weird combo) in a late-1800s tobacco card style. I’ve gone with “watercolor-esque” backgrounds of all 30 MLB stadiums, with players on top in a sort of Gypsy Queen treatment. I wanted the stadiums to resemble old lithography prints, and the players to stand out but not be 100% “modern photographs” on top. Hence the effects. I also found an excellent accompanying font that I think works with the period pieces. I also found a really fun tool for making a vintage logotype for the backs. 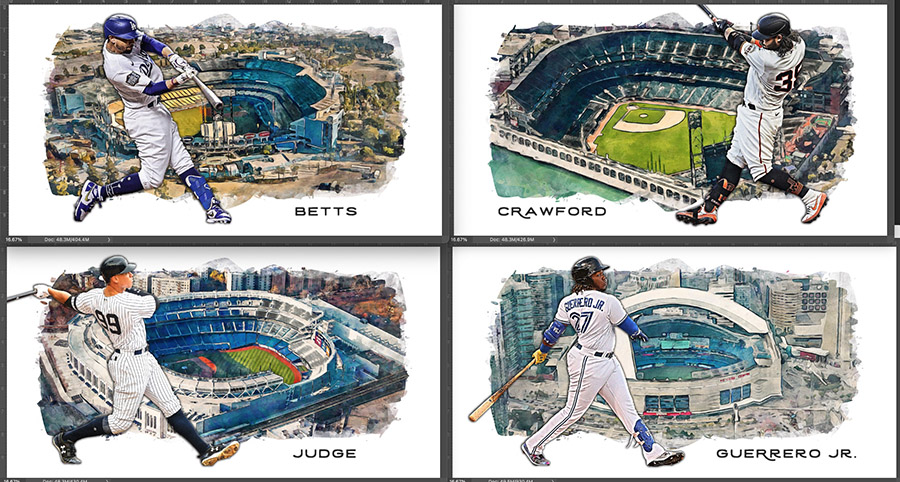 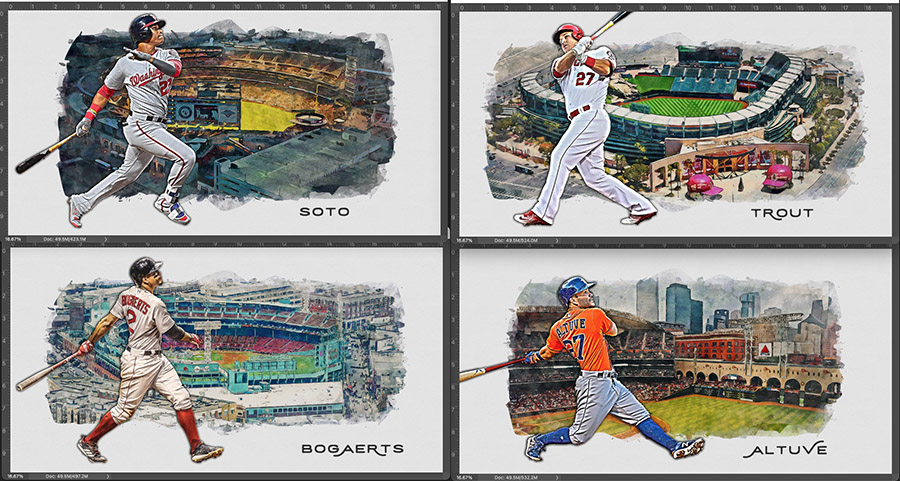 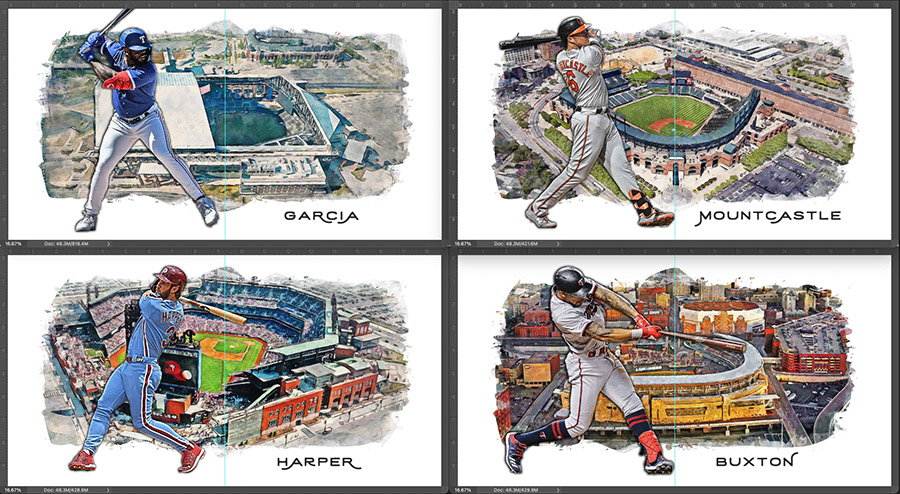 When I started creating them I was really only paying attention to the aspect ratio (the overall width and length ratio), and trying to match it to modern mini inserts, and then I realized my master design files were actually 18+ inches wide, and with a little tweaking would make excellent posters. This is what it looks like on 22” paper (mini included for scale).

My plan is to actually print these. At the very very least print a set for me to put in a binder. I’d love to find a printer who can do short runs on thick card stock, but so far I haven’t found the right one. I don’t know about selling them, seeing as how I’ve used not only pictures of the players with obvious copyrights to the photographers, but also the stadiums, which might be even more copyright protected due to their corporate sponsorship/ownership (depending on the stadium). There might be a “donation” opportunity or a “raffle” (with guaranteed odds), for a VERY limited number of sets, but we’ll just have to see.

Beyond these I’ve got plans for a variation on Panini Select and a completely different take on 2022 Gypsy Queen (because this year’s design really sucks). That’s in the pipeline for May. After that I might be venturing into game design with a friend this summer, we’ve been itching to put together a family friendly dungeon crawler using Unity (think more Torchlight, less Diablo). 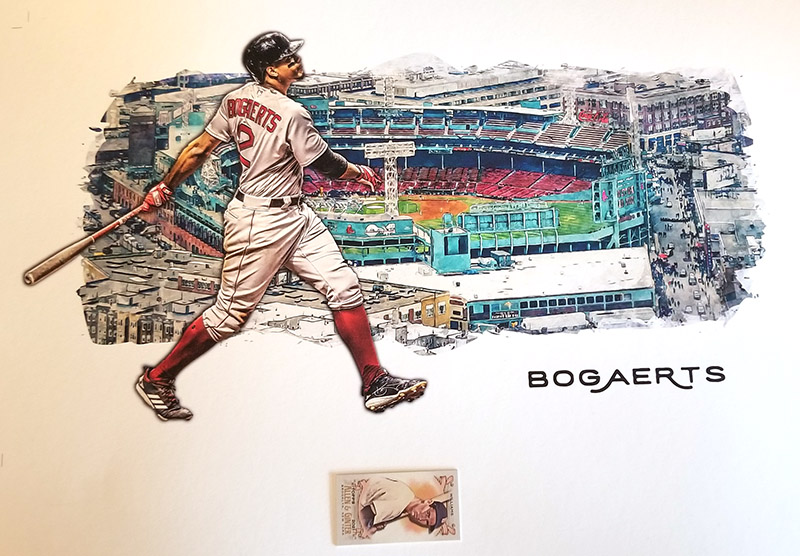