I showed off random team sets earlier this year when several of them hit at once (S1, GQ, etc). Now that the summer has drawn to a close we can take a look at what the past few months had to offer. 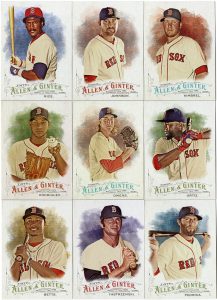 Ginter is the embodiment, to me at least, of everything I love and yet everything I hate about cards these days. Sets that have such incredible potential for perfection are tarnished with questionable decisions from checklists to production materials and beyond. I’ve color corrected the scan above and white balanced it to the Jim Rice card in the top left. Look how yellow the Rodriguez card is below it. Now imagine that 200% more yellow and that’s what the actual card looks like in hand. Beautiful line work on the nameplate/banner at the bottom and yet some sort of line-texture shading on the backgrounds looks entirely out of place given the 10+ years of “color clouds” that precede it. Lines like that were used for shading objects in older printing techniques when you were printing a single color ink.

Then we have the perpetual “guy who’s card we’re force feeding you this year”. I’ve got nothing against Henry Owens, but I seriously don’t need 47 rookie cards for him. What’s even more aggravating is the inconsistent use of the rookie logo. I said that was an Owens rookie card, but where’s the logo? It’s on his Stadium Club card (below). Why not on this one? We just picking and choosing randomly now Topps? 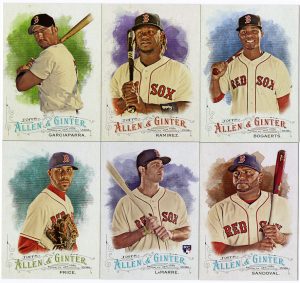 Ryan LaMarre gets a rookie card? He played ONE GAME for the Sox this year. Five plate appearances. Total. Not to mention, he played LAST YEAR for the Reds before being completely non-tendered. The Sox signed him to a minor league deal with an invite to Spring Training, but he hadn’t come anywhere close to making the roster when this checklist was put together. I don’t understand who picks these things. Not only that, Pablo Sandoval is the freaking SP??? Seriously? So, in essence, they gave 3 cards to historic players, which is fine, two cards to guys not on the roster, and a SP to a guy who’s been out the entire year after surgery. That’s 3 cards that should have gone to current, every day players. Off the top of my head, how about Porcello, Wright, Holt, Bradley Jr., Leon, Young, Swihart or Shaw? No? Nobody? 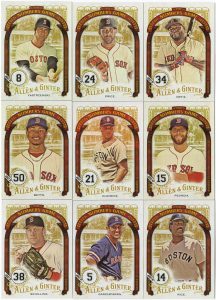 The “Numbers Game”. Interesting concept, but I’m still at a loss for how the jersey number on the front translates into the random “numbers” or stats they’re discussing on the back. I don’t have any problems with the players they picked, all good choices. The “NG” cards were this years major insert, like the Hometowns of the past. I’m ok with these, even if the background is a little much. 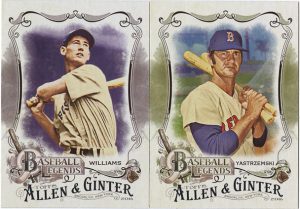 Baseball Legends. Isn’t that sort of the point of including famous players from the past in the base set? That we’re honoring the great players by including them. Not that I disagree with Ted and Yaz being legends, they clearly are, it just seems sort of redundant. Oh well. Another year, another Ginter. I usually try to mind all the minis as well, but I think I’m giving up on that. People are asking $20-25 for a team set of the minis and that’s just silly. I paid $7 for these. I love minis, but it’s such a pain in the butt to chase them. Maybe if they’re reasonable on SportLots or something.

I was incredibly lucky this year to win a hobby box of Stadium Club. Even with an entire box I was unable to personally pull more than three Sox cards, so I had to track down a team set elsewhere. 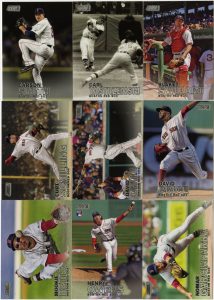 Love the photography this year. It’s really top notch. The Swihart, Mookie and Owens cards stand out to me as exceptionally good. As I mentioned before, here’s that RC logo on the Owens card. These two products were 22 days apart. You can’t tell me he’s a rookie on one checklist and not on the other. That makes no sense. 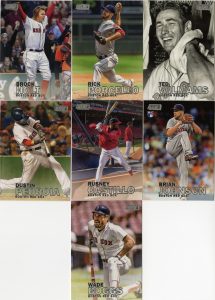 That’s one of my new favorite pictures of Ted Williams. That’s awesome. Stadium Club also gets bonus points (bias) for including a Brock Holt card. However, that Rusney Castillo card is a bit questionable. I understand he was supposed to be great, but he hadn’t been on the major league roster all season. In fact, in June he was outrighted to Pawtucket on wavers! No one claimed him. Apparently he just can’t hit at the major league level. The sticker/relic dump has been insane. Both Topps and Panini included him in about a dozen products just to clear out inventory. Kinda sad actually.

I had included the David Price “ISO Metrics” insert in the post about the hobby box, so that leaves me just the Mookie Betts ISO card and a David Ortiz “Beam Team” insert to find, both of which I’m not concerned about rarity on and I’ll track down eventually.

Between the two, Stadium Club is by far my favorite this year. Despite being a sucker for retro products, it was a pretty unimpressive year for Ginter and it just didn’t do anything for me. The photography in SC is top-notch and I continue to be jealous of photographers who get those sorts of assignments.