I don’t actually own that much in the way of “sports memorabilia”. Having entire gloves, bats, shoes, etc., is just too expensive. I don’t have any disposable incoming, I’m not a doctor or a lawyer, so paying hundreds of dollars for stuff is just not going to happen. I do have a signed Jim Rice jersey that Sam found for me, and a couple balls I’ve had signed in person. That was it, until today. Today I’ve added a signed bat to my collection.

So, who signed the bat…?

If you’ve been reading this blog long enough, you know it’s my boy Brock Holt. That’s not all. While a game-used MLB bat is still out of my price range, a commemorative minor-league bat isn’t. I found a bat signed by the majority of the 2012 Eastern League All-Star Team’s Western Division.

The seller started it off at $5, and it was mine at $20. They also included the program from the game and the ticket stub from the luncheon where they got it signed. Those things, along with the fact that there aren’t any super-star’s signatures on it, leads me to believe it’s authenticity. Why would you find a commemorative bat from 2012 and forge minor league signatures on it? You wouldn’t. So, I’m 99% sure these are legit. The next time I see a PSA booth at a show, I might bring it for authentication, but for my own collection, I’m good with it as is.

The Brock Holt auto was my main motivation, but there are other names on here that you guys might recognize. Let’s take a look… 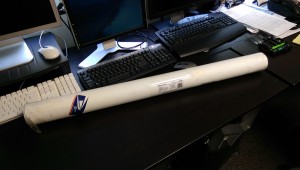 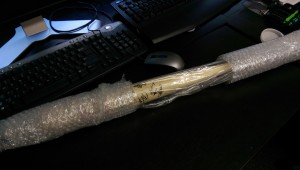 It showed up packed exceptionally well by the seller. Gotta give kudos on that, most people just shove things in boxes these days. 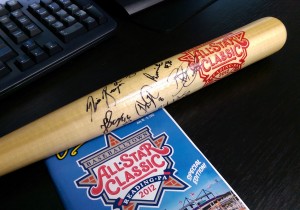 The barrel along with the program. 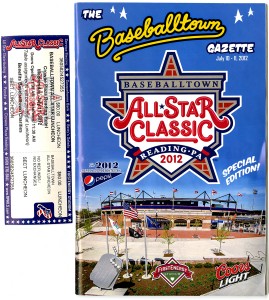 The program and the ticket stub. Kinda sucks (for them) that they paid $60 to go to a luncheon to get a bat signed that they only got $20 for. On the other hand, that’s great for me! 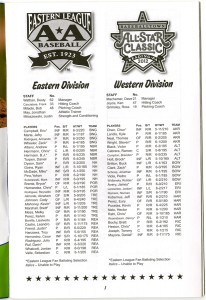 The roster page in the program. There are quite a few current major league players along with a good number of guys doing well in the minors on there. Zack Wheeler, Bryce Brentz, Chris Hernandez, Melky Mesa, Darin Ruf, Steven Wright, Brock Holt, Jonathan Schoop, Brett Bochy, etc.

On the ebay listing, the only two mentioned were Holt and Schoop, the others were a mystery. I spent some time digging through Google and Ebay, looking for autographs that matched, and I think I’ve figured out who they all are…

Brock Holt, of course. That one was obvious. 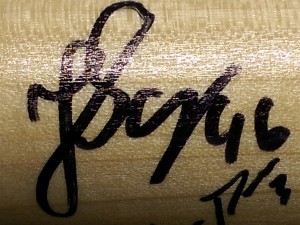 Jonathan Schoop, currently playing 2B for the Orioles. 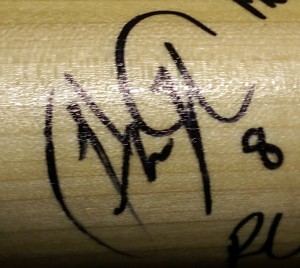 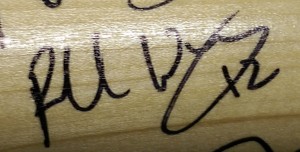 Robbie Widlansky – Made it to AAA with the Orioles and Angels, also played for the Somerset Patriots. 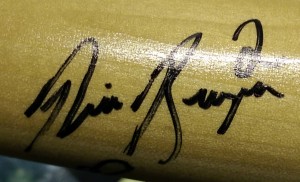 Rico Brogna – Played for the Mets, Phils, Red Sox and Braves. He was the guest speaker at the luncheon. 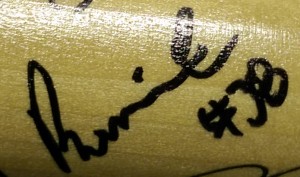 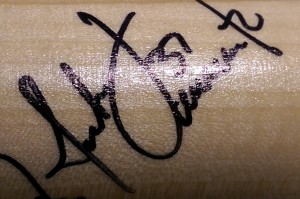 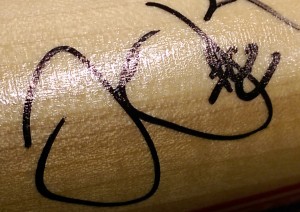 Jeff Kobernus – Played outfield for the Nationals in 2013/14 and is now in the Giants organization at AAA. 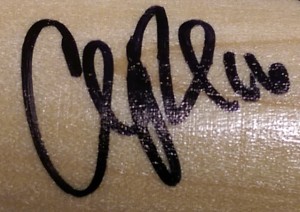 Chris Rahl – As of last year he was on the Twin’s minor league affialiate the Rochester Red Wings, but I can’t find any mention of him playing in 2015. 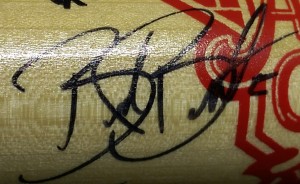 Buck Britton – When I first saw this auto, I thought it was Bryce Brentz, but after comparing the two, and the fact that every other auto came from the Western Division, it’s probably more likely that this is Buck Britton’s signature. Currently playing for the Dodger’s AAA team, the Oklahoma City Dodgers. Fun fact, he’s the OLDER brother of Zach Britton, pitcher for the Orioles. 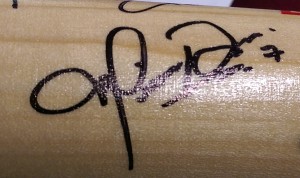 Unconfirmed: Niuman Romero – The letters I can make out are something along the lines of “Nim Rom”, and Romero is the closest on the roster. Also, the “#7” and the timeline don’t really add up. According to Baseball Reference, he wore #4 and #13 when playing in the majors. His last appearance was 2010 for the Red Sox, and in 2012 he was a free agent and signed with the Tigers. There’s also a good chance BR could be wrong. His profile on MiLB has him playing for the Erie SeaWolves (who are in the Eastern League) in 2012. That page says he’s currently playing for the Nashville Sound in the Pacific League.

There you have it. That’s all 12 of the signatures on it. It took a couple hours worth of comparing autos I found online to narrow down the list. Three currently major league players and three guys legitimately knocking on the door isn’t too bad. Like I said before, I bought it for the Holt, the rest was just fun to research.