I complained about this last year, and I’m going to repeat myself and complain about it again this year. Why on earth is there no consistency in Gypsy Queen? 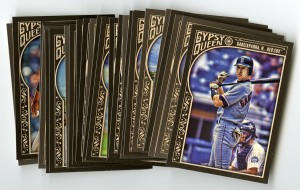 I’ll let you click on that and see it in it’s full-sized glory. See anything a bit off? Yeah, the printing job is terrible. The colors are all over the place. The only possible explanation is that they were printed by different printing houses, in different locations, and then combined when they were sorted and packed out. Even then, I can’t imagine there wasn’t a color reference sheet, or press checks, or just basic quality control. This stuff is kind of basic in the printing industry.

We do 10,000+ runs of corporate brochures and we check color and consistency before we start printing (by doing test runs), again once they start rolling off the press (for comparison) and again towards the middle and end to make sure it’s staying consistent. Pantone colors should match throughout the entire process.

These cards, these are something else. There are at least three (if not four) different colors in there. One really dark (far left), one that I believe to be correct (Nomar, far right), and ones that are considerably lighter mixed in.

Last year it was the colors of the backs, this year the problem has run over onto the fronts. That’s just the first of many issues. Let’s talk about photography and photo processing through Photoshop… 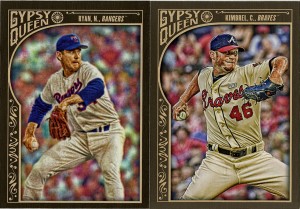 Here’s a perfect example. Two very similar cards (in composition and player body position), but look at the photos. The Kimbrell on the right is sharp as a tack. You can see the Rawlings logo on the ball and even the notch-holes on his belt. The filters they’ve used have been applied in the correct manner, giving it that semi-HDR look which makes the details pop but makes it slightly grainy as if to suggest an old-timey photograph. I LOVE that concept, especially as a photographer and designer. Now look at the Nolan Ryan on the left. Complete garbage. Everything is blurry. Someone either completely messed up the settings on the filters, or they used an incredibly low resolution photo and/or blurry photo as their source material.

This is incredibly hard for me to understand. Topps has photographers. Topps has had photographers since the 1950s. They’ve made Nolan Ryan cards before. They’ve made Nolan Ryan cards with good, sharp photos before. Ryan is wearing a Rangers uniform, which means the photo is from 1989-1993. They made good cameras, and good lenses in the 1990’s. Why is a photo this bad even a possibility at this point. Topps SELLS POSTERS of the man, which a sharp photo, taken in the 70’s!!! Good photos of Nolan Ryan are not the problem. They’re easy to find. Here’s a bunch!

That means the only explanation for that card being that terrible, is user error. Want another, here’s another… 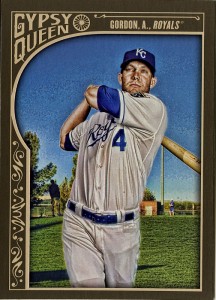 Bad photo, check. Blurry edges on obviously photoshopped player, check. Pixelated sky? Sure. Why not. If you’re going to make a terrible card, you might as well go all out. Alex Gordon was not standing on that field, he’s been cut out, poorly I might add, and placed on it. Not only that, but the effect looks to have been applied to him and the background separately. There’s no excuse for that sky. That’s just processed poorly. Look at these others… 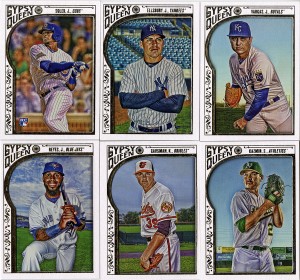 Ignore the other 2, but Gausman, Kazmire and Vargas are all standing in front of a very similar sky. All of these were probably taken in Florida during spring training. They’ve all been processed to an acceptable level. Even Reyes, with more complicated clouds behind him, managed to come out with heavy distortion.

It’s such a shame that a good concept like this is diminished by sub-par design work. I’m sure the folks in Topps graphics department work hard. They’re probably on really crappy deadlines and they probably have to do so many of these that they start to not care. I get that. I’ve been there. I also know that I don’t produce something that will be seen and handled by thousands of collectors, who view cards as mini, collectable, pieces of art. Art that represents both the players and the sport that they enjoy.

That’s something that’s worth taking the time to do a little quality control with.