My preferred (but notably less “fun”) way of buying baseball cards is in team sets. That’s my primary focus and, I won’t lie, sellers who bust and sell sets make my life so much easier. Having the ability to buy a $5 team set and avoid wasting $20 on a blaster of cards I don’t need is an awesome thing. Plus there are some things I wouldn’t normally be able to buy, like hobby only team sets, because I don’t bust boxes of most things. 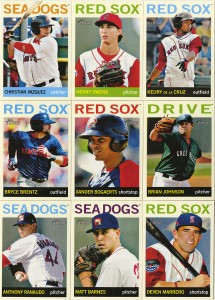 This is one such set. 2013 Topps Heritage Minors. It was hobby only. This is the Red Sox team set, minus the Blake Swiart SP, which I’ll probably pick up on my next SportLots order. I wanted to pick this up not only for the Bogaerts card but because just about all of these guys have a serious shot at making the big leagues and having a minor league card is always kinda cool. Plus, if they do make it, and I’m looking for autographs, Heritage is an awesome set for on-card autos. 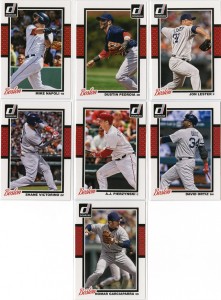 And, the weaker of the two sets I picked up. 2014 Donruss. Yuck. For everything I’m enjoying about Panini, Donruss just craps all over it. It’s just ugly. The inserts are ugly. The “Rated Rookies” are ugly. I know it’s supposed to be all nostalgic, but damn. For every way a good design hides the lack of logos, an ugly design accentuates it. I don’t even know if I want to find the Bogaerts rookie SP. Oh well. $2, not the end of the world. Lesson learned.