One of these things doesn’t belong

Actually, more like all of them, and specifically to my personal collection. Well, a couple of them are borderline. A couple of them were also complete mistakes. Let’s start with those! 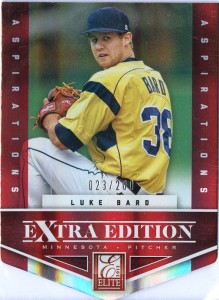 So, picture this. Large conference/event center, hall filled with people and collectors, and I’m flipping through dime boxes while my father rambles about how such and such a player used to be on some team in the 1970’s, and how it’s super hot in the convention hall, and how he can’t believe a Coke is $7.50 at the concession stand, and how his feet hurt, and it’s making his back hurt to stand around, and the entire time I’m thinking to myself “Seriously, just shut up! Why did you want to come with me if you didn’t want to actually look for awesome baseball cards?!?”, all while thumbing through stuff.

That’s how things like this happen. Luke Bard is not Daniel Bard. Clearly. Actually, it’s his brother. 023/200 isn’t bad, it’s just for the wrong Bard. Speaking of “wrong brother”… 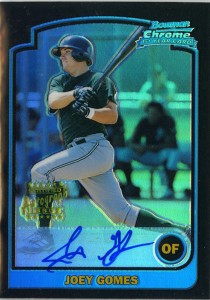 Guess who this isn’t. Nope, Joey Gomes is apparently not some misprint/shortened version of Jonny Gomes. It’s his brother. /facepalm 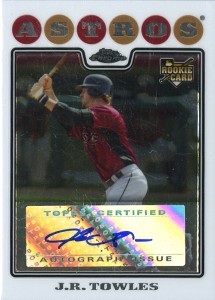 This is a terribly segway into cards “not for me” because there’s nothing wrong with J.R. Towles and I didn’t buy it thinking it was a Jackie Bradley or anything. My only regret is that I’m 99% sure Sam already has it. I don’t mind that much, it was the “20th” card from one of those “20 cards for $5” sorts of tables. 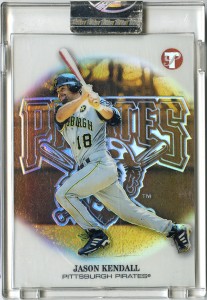 I don’t actually know where this one came from. I don’t remember buying it, but clearly it stuck out since it’s encased. It’s not like it’s thin and it stuck to something else. I’m pretty sure it’s fairly low numbered too. It looks pretty awesome with the hologram effect behind it, but I just don’t know any Pirates collectors (or at least anyone’s that might want it). 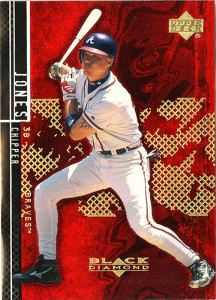 Chipppppppaaaaaahhhh. I always liked Chipper. Seemed like a real grinder. Somebody that would just go out and play as hard as he could, and take the team on his shoulders. I put folks like Craig Biggio in that category as well. I like the card, it’ll just have to find a good home. 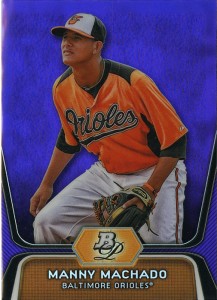 Purple chrome (retail) parallel for Manny Machado. I had started a player collection for Manny, but turns out this is a dupe and I already had one. 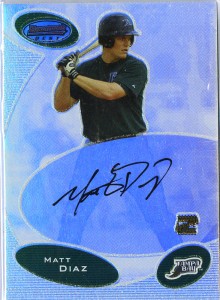 Matt Diaz. The name sounded familiar, and it was $0.25. Turns out, not that familiar. I have no idea why I have this. He seems like a nice guy though.

You want some Todd Helton? I’ll give you some Todd Helton. Fleer Tradition with a nice pin stripe at the bottom. UD Artifacts numbered /199 and that innocent looking Donruss Timeline on the left, yeah, that’s some crazy rainbow parallel and it’s like 19 of 20, or something nuts. 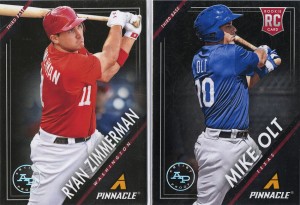 Last but not least, two nice “Artist Proofs” from Pinnacle. Ryan Zimmerman and Mike Olt. Not a bad pair. Not sure what to do with those. I’ve got a mini collection for Zimmerman, and Olt got traded to the Cubs, where he should land the starting 3rd baseman job. Either one would be up for trade if anyone is interested. That obviously goes for everything else in this post as well.

Anyway, we’re almost done with this frantic run through random wastes of money. Join us next time when we explore “Thing I Actually Intended to Buy!”.