Last week my local Walmart decided to rearrange it’s entire card section. It went from a tiny, single shelf near the “self checkout” to an entire isle on the other side of the store, complete with 5 of 6 shelves and a whole new card game section. I could care less about Magic and Pokemon, but having a larger card section is a welcome sight. They clearly didn’t have enough stock at the time to fill it out, so Excell dropped off a metric ton of stuff they were obviously trying to get rid of. The whole section was filled to the gills with $11.99 discount blasters, $2.99 rack packs, and a bunch of those $0.99/1.49 discount pack boxes. I grabbed a couple GQ packs and some random 2009/2010 Bowman stuff that was all marked $2. 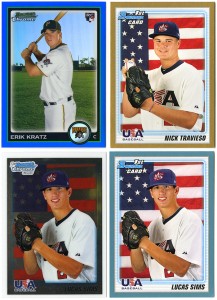 I’ll start with the Bowman stuff, since it’s only mildly interesting. Three years later, it’s interesting to see just how many players that have RCs in 2010 actually made it to the big league. I’m not sure if these guys ever did, but these next folks certainly did… 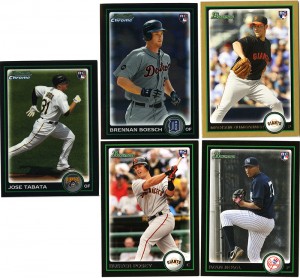 Tabata, Boesch, Posey, Nova and Bumgarner rookies. Nice. Especially since the Bumgarner one is a gold parallel. Not too shabby for a single rack pack.

Next up, some 2013 Gypsy Queen white borders. The rack packs were $3, as opposed to their normal $10, so I grabbed a couple.

The Ellsbury is staying with me, everything else is up for grabs. 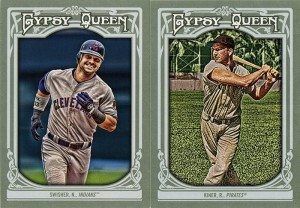 I also got two SPs, both of which I can cross off my list. Don’t you just want to wipe that grin off Swishers face? I know I do.

Next, they also had 2012 GQ rack packs, so I grabbed one of those as well. Got 3 nice copper parallels out of that one. Kliner, Tulow and Nelly Cruz. 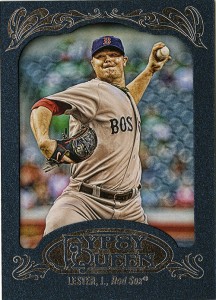 I also got a blue parallel out of my 2012 rack pack, and this one is staying with me. I didn’t have a Lester blue parallel, and now I do. Yay! 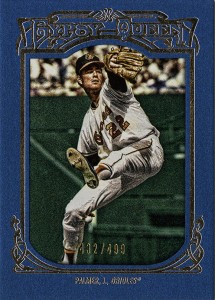