About two months ago, I had a mysterious email from PC Gamer magazine. I had won a contest for a new set of gaming hardware and a copy of XCOM:Enemy Unknown. They asked for my address and I never heard anything else from them. Then, a couple weeks ago, random packages started arriving at my doorstep, one each day for several days. Wrapped in brown paper, with no return labels, and inside were a new Razer Lycos Keyboard, a Razer Imperator mouse, and the game.

Of course, the first thing I did was hook everything up and run it through it’s paces. What I came away with was an increasing gratitude that I had won these items, and not actually purchased them. I hate to look a gift horse in the mouth, but compared to my existing hardware, Razer unfortunately doesn’t stack up.

Let’s start with the mouse. The Razer Imperator 2012 (msrp $79.99). At first glace the tech specs are quite impressive, and stack up neck and neck with my existing Logitech G5. The Imperator has 6400dpi 4G dual sensors, on-the-fly sensitivity adjustment, on-board memory and customizable sensitivities via the software. The rest of the features (non-stick glide surfaces, thumb buttons, etc) are found on most gaming grade mice these days, but it’s worth mentioning that they’re present here as well. 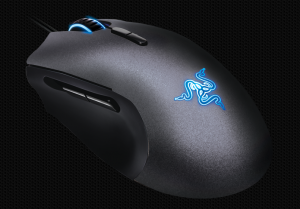 The Imperator also features “adjustable thumb buttons” as you can see in the side view. There’s a small slider on the bottom of the mouse the moves those buttons forward and back, letting you customize it for smaller or larger hands. The mouse is LED backlit in both the body (company logo) and the scroll wheel itself. The scroll wheel light it actually one of the brightest LEDs I’ve seen in a long time, which may or may not be a distraction when gaming.

Overall the mouse is actually quite large. Larger than my G5 and even my MS Intellimouse Optical, which I’ve always considered a “big hands” mouse. That’s not to say it’s uncomfortable, but its definitely not causing any finger crowding any time soon. 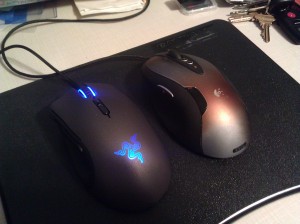 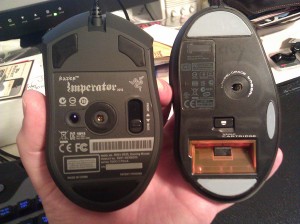 The action on the scroll wheel was very smooth, with the slight “tick” at each interval, letting you know that it is in fact turning. The glide across my RatPadz is smooth and even. Then again, the RatPadz is like buttered glass, so I’m not sure how anything would have a hard time gliding.

The mouse “feels” nice in hand, or at least it does until you start trying to use it for actual gaming. This is where we lose ground.

The first thing you need to do when you plug the Imperator in is install the software. The software is also not in the box, and nothing tells you this. Windows does recognize it as a generic mouse out of the box, but if you plan on using the extra buttons, be prepared to find the drivers on the Razer website. Once you have the software installed, things aren’t all roses and kittens either.

For starters, the software is needlessly ugly. The drivers and customization software loads into memory and sits in the system tray. On my system, it was taking up about 4mb of memory, not a huge amount, but certainly well more than a mouse driver should need. This also brings into question where exactly is the “internal” memory of the mouse being used. With that in mind, I tried changing some of the settings, and customizing a profile… 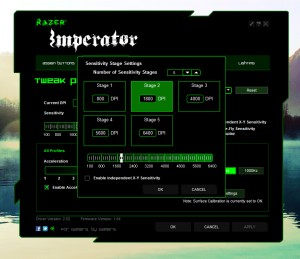 The default sensitivity settings are: 800dpi, 1800dpi, 4000dpi, 5600dpi and 6400dpi. There has never been an instance, in any game, in any situation, where I would need 6400dpi of sensitivity. That is ridiculously and comically high. 800 is good for every day tasks, email, surfing, etc. 1800 is probably a good “high end” for gaming. Anything above 2250-2500 I consider to be nearly unusable. 3000 would be my conceivable ultra high-end, even for the most “twitch” based gamers.

The jump, in-game, from using the 1800dpi setting, strait to 4000 is actually disorienting. I customized these right off the bat to a more normal range of 800-2500, in increments. Or, at least I tried to. Once you customize the settings, you can actually cycle through them via the buttons, and try them out before saving them. Once you click “Save”, it says it’s “saving to the device”, which I’m assuming is the “memory” of the mouse itself, then the software hangs, followed by a hard crash and the mouse stops responding all together.

Fixing it requires unplugging the mouse all together, and plugging it back in. I never did get it to write my customized sensitivities to the mouse itself.

In-game the mouse is responsive about 90% of the time. The last 10% its completely lagged, or dead, or both. Not a good place to be when you’re aiming for a headshot and your mouse stops working.

So, the Imperator, while “feeling good” in hand, and smooth on the pad, is actually buggy under normal use, and completely unresponsive and impossible to work with via the non-included software. It’s a real shame. For such an expensive and seemingly well designed piece of hardware to have such issues is pretty unforgivable.

Moving on. The keyboard they sent was the Razer Lycosa (msrp $79.99 also). The keyboard, as a whole, fared better than the mouse, but still won’t make its way into my daily use. I’ve unfortunately misplaced most of the photos I took of the keyboard, so I’ll just have to describe it in detail. 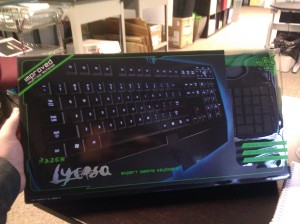 The keyboard is the basic size and shape of most, including the numpad on the right. The entire thing is coated in a non-slip rubber finish, making it actually feel a lot like a mouse. The keys are light and springy but have the “mush” feel of most membrane keyboards. The mechanical “tap tap” of a more traditional keyboard is missing. There’s a touch-sensitive pad in the upper righthand corner that serves as the controls for the illumination, the media keys and the customizable profiles.

I could almost cut and paste my experience with the software and the profiles from the section above regarding the mouse. The software was terrible, didn’t work, and never saved to the keyboard. The media keys worked, sort of, and would increase/decrease the volume, but the touch-sensitive pad itself would sometimes become unresponsive. So, in the midst of turning the volume down, you end up hammering on the down arrow two dozen times to get it to recognize a single finger press. It was decidedly un-touch-sensitive. The illumination was actually one of the positive points. It has 3 modes, full-on (the entire keyboard lights up), gaming (where only WASD light up) and “hacker” (where the keys are completely blacked out). The letters aren’t actually printed on the keys, but are clear plastic within the rubber finish. So, not having the light on effectively blacks out the entire thing. Fun for someone like me, who can blind type, but probably frustrating for more casual gamers, who would probably prefer that the mode just be called “off” and just leave the thing on 24/7. When lit it’s quite bright, and easily readable.

That actually brings me to another issue. It doesn’t actually turn off. Powering down my machine, they keyboard (and mouse for the record) continue drawing power from the USB ports. The keyboard remains lit when not in use. I’m not sure if that’s an issue with my machine specifically, but I can assure you I “shut down” my machine, I do not “put it to sleep”. So, the fact that it remains on is puzzling.

The last issue I had with the Lycosa is probably the biggest. It was terrible to type on. The arrangement of the keys, and it’s hard to see without a specific picture, is just “off” that of a standard keyboard. The enter/return key is too far to the left, and nearly the same size as the right-shift. The left-shift is truncated into a smaller version of itself, making it feel the same size as Caps-Lock and Tab, and the left control/alt combination is too far to the left, making me hit the dreaded Windows key 99% of the time I was trying to hit control, which was a tiny chicklet of a key. When I tried to compensate and move my hands closer together, it completely threw off my typing. In-game text became impossible. Essentially, using anything other than WASD became a huge pain. I’m sure it falls under the “you just have to get used to it” category, but I gave it a solid two weeks as a field test, and nearly threw it out the window by the end. It was off by just enough to be maddening. I was eternally grateful to return to my Logitech G11, and to hear that “clack clack” of the keys once again.

So, unfortunately, $160 worth of peripherals is pretty much unusable, at least to me. It’s honestly a real shame. The Razer company motto is “for gamers, by gamers”, but I just fail to see how any real gamer could settle for an oddly laid-out keyboard and a mouse that doesn’t work. Yeah, it glows bright blue… but does it work? Blue LEDs does not a gamer make. I can’t honestly recommend that anyone drop $80 on either of these.