So, Giants and Tigers huh? That’s not a bad World Series. Certainly more interesting than a Yankees/Cardinals WS, right? I was actually kind of pulling for the Nationals to go a little further, but the Giants are among my “if I didn’t have the Red Sox…” optional rooting teams. That’s a pretty small list by the way. Astros, Giants, Nationals, Blue Jays, Rangers, for the record. Those are the teams I don’t mind rooting for, unless they’re playing Boston of course. I was thinking about it and I don’t think it’s odd to have a “B list” of teams you don’t mind seeing do well, do you? Most of those teams have players that I’m interested in watching on them, so perhaps it’s more of a “I respect the players” sort of thing, and not so much their geographical location. I’ve never been to San Francisco, but I do like Brandon Belt, Buster Posey, Hunter Pence and Marco Scutaro as players. I even have a couple Belt and Pence rookie cards.

Anyone else think it’s odd that no one congratulates Posey, ever, at the end of a game? It’s very odd. He just kind of stands there and everyone else goes around him.

Happened last night too. I wonder if nobody likes him.

Also, Hunter Pence, with a beard, is freaky. He looks like a crack addict. Some people just shouldn’t do the beard thing. Hunter, sorry bud, you’re one of them. 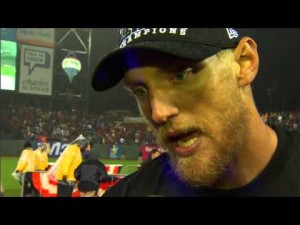 As far as Detroit is concerned, it sounds bad, but they’re just not on my radar. Verlander is obviously interesting to watch, but I’m not really a huge fan of Fielder or Cabrera. Sure, he just won the triple crowd, but I can’t honestly say I’ve paid attention to him, or anyone in their line up, at any point in their careers. I actually just looked through Detroit’s lineup and I don’t even recognize most of the names. Besides the big 3, I would have been able to name Aníbal Sánchez, just because I have one of his autos, and Alex Avila, because he was my Fantasy team catcher last year. That’s about it.

As far as the series in concerned, Detroit’s got Verlander to get them started, but the Giants have the hot bats at the moment. I’ll give game 1 to Detroit, but I think the Giants will take the series in 6. What do you guys think?