You’re going to have to excuse me while I do a little happy dance over here. The mailman just dropped off the final piece to my GQ relic puzzle.

Right off the bat, I had planned on going for all the Sox relics from 2012 Gypsy Queen, I just didn’t know how rare some of them were. The first ones were easy to come by. I picked up most of them for about a dollar, and couple as a group in a lot sale on ebay. There were 3 of them however, that proved to be quite a pain to track down.

One of my pet peeves about relics, especially with Gypsy Queen, is that a lot of times they go unnumbered. That’s not to say that I prefer  the”artificial scarcity” of numbered cards, but I just like to know what I’m dealing with. Finding a 1/20 is obviously going to be a lot harder than a 1/2000. GQ relics are unmarked, but there’s always been an unofficial rumor (and real world observation) that some are just extremely short printed. Obviously, relics from legends of the game are going to be harder to produce and thus, harder to find. We’re also going to ignore, momentarily, the whole “those could be fake” aspect, and just enjoy the ride. Just this once, ok?

Anyway, there are 5 players who had both a full-sized and a mini relic, and then 2 that had a full sized only. The official checklist has the “mini” sized relics to be 11 less than the full sized ones, for whatever reason.

It should come as no surprise that those two, exclusively large sized, relics were short printed. Also, two of the minis were also significantly shorted as well. The prevailing wisdom is that there is an A, B and C list for availability. I had some of all 3 to track down.

I now have all the base cards, all the photo variations, all the large relics, all the mini relics, 2/3 of the autos and about half the minis. I’m still far from the epic master set, but with only incredibly expensive autos and a handful of minis to go, I’m still declaring it a victory that I finished the relics. Without further ado… 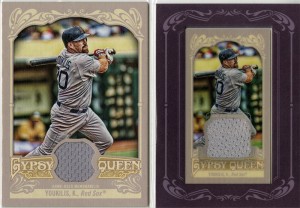 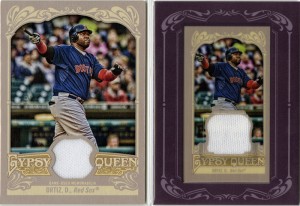 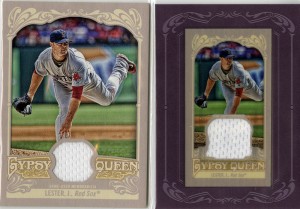 These 6 were the easiest to find. I pulled one myself, traded for another couple, and picked up the rest off ebay for next to nothing.  I love seeing the mini versions next to the big ones. It kind of ties the whole thing together. 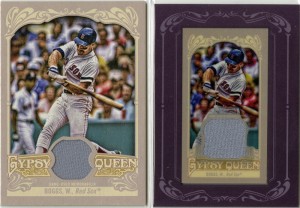 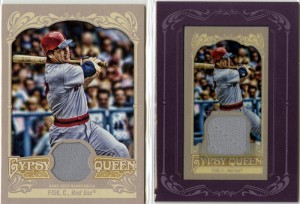 The larger versions of both Fisk and Boggs were fairly easy to track down, and just slightly pricer than the others. The mini versions of both are fairly short printed though. The Fisk doubly so. It was the 2nd to last one I tracked down. At the moment there’s only one other Boggs mini on eBay, and none of the Fisk. Only two have ever even shown up for sale, and I grabbed one of them. 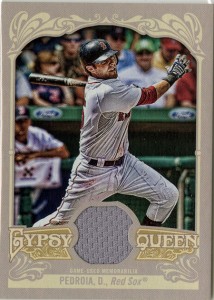 I had another lucky break with the seriously short printed Pedroia relic and grabbed it up just after the product launched, before people realized it was rare. I actually can’t find another in the wild. 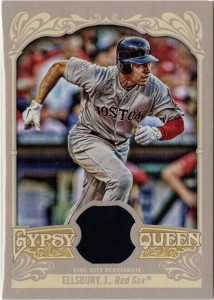 Finally, the rarest of all. An extremely short printed, complete beautiful Ellsbury relic. Here’s the crazy part: the only other one, on any site, to have ever been sold, was a white jersey swatch. This one? Navy, and most definitely not jersey. I think this is a patch. It’s either that, or the “special, alternative, 3rd version jerseys” are all made of extra thick material. 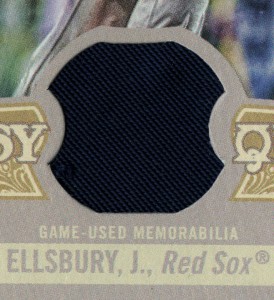 Am I crazy to think that’s a patch, from a letter on an away jersey? The letters on the away jerseys are blue. It just might be.

Regardless, it’s what the mailman brought me today. The final piece to one of my favorite sets this year. We’ll call this one my card of the day. I’m so glad I finished putting this one together. They look awesome as a collection. I’ll probably track down the minis one day, and complete the set for good, but for the moment, I’m content.