So, Matt over at Cardboard Conundrum was having a huge break this month and I jumped in hoping to finish off my sets for 2012 so far, which I did. Topps Series 1, Series 2, Archives and Gypsy Queen are now, as they say, in the books. Well, as far as base cards go. Heritage is down to a single short print, and I’m still searching out a couple more minis, and two more relics for GQ, but that’s a post for a different time. On to the loot!

Going to keep this post simple. I didn’t scan any of the base cards for any of the sets. Mostly because everyone’s already seen them, either here as I’ve been assembling them, or elsewhere in your blog travels, and quite frankly, it would have been a ton of scanning. Matt opened 6 boxes, and jumbo boxes of S1 and S2. I did get a couple neat inserts and hits however… 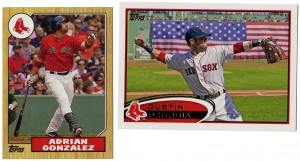 First up, my first Sox ’87 mini for this year and a very neat short print for Pedroia. I was trying to score one of these on eBay and there were not cheap. I’m glad I got one the in break, otherwise I’d probably never get my hands on one. 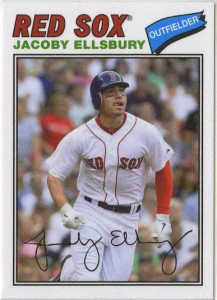 Next up, from 2012 Archives, a neat looking Ellsbury cloth sticker.

Next, 4 more GQ minis for my Frankenset. Beckett, Ellsbury, Lavarnway and Boggs. All different backs in case you’re wondering. 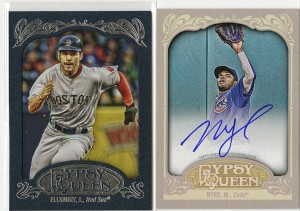 Last but not least, a super nice Ellsbury blue border and my 2nd Byrd auto from Gypsy Queen.

Thanks for the awesome break Matt!