Trade and Break with the Dimwit

Last week Sam over at the Daily Dimwit had his monthly group break and between now and then we had also arranged a quick trade. Sam’s a closet Rodger Maris fan and a Maris relic was one of the hits I pulled from my only two blasters of Gypsy Queen this year. He combined all my loot into one nice package and I got it yesterday. 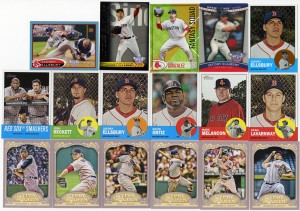 Believe it or not, but I wasn’t actually planning on buying any Opening Day this year, but I’ve not only got the team set, but a good chunk of the inserts as well. That’s also my 4th blue border. The 3D card is actually one of the nicer inserts I’ve seen in a while as well. At the bottom, the Melacon and the Lavarnway were also the last two I needed for a complete 2nd Red Sox set of Gypsy Queen. So, that’s awesome that he pulled those. As for Heritage, for some reason I had a soft spot for early on this year, and I managed to get 98% of the set via group breaks. That Ellsbury chrome is a very welcome addition and that Ortiz in the middle there is one of only two cards I needed. It’s a high numbered SP. It’s also kinda funny looking… 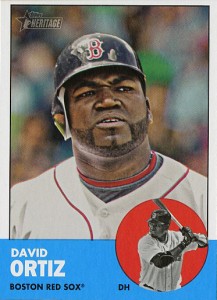 Was it a “thing” that the SPs were in-game shots, and not in front of a fence at spring training? Or am I crazy? Also… that photo is missing something… 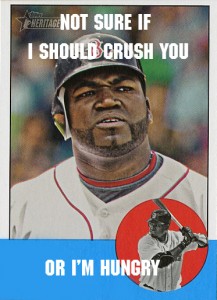 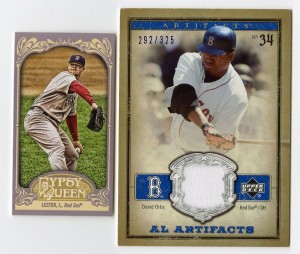 Last but not least, the trade items. Sam got the Maris relic and all my spare GQ minis, and I got these two beauties. A Lester mini for the collection, and a very nice UD Artifacts Ortiz relic. He’s also sending a Brentz auto I had been after, but that didn’t make it to the scanner in time.

Always a good break from my buddy Sam, and the trades are always welcome. Thank you my friend 🙂