That sounds ominous doesn’t it? Fear not, it’s really just more cards, and a follow up to my last post.

So, a couple weeks ago (as I think I mentioned), the wife’s car broke down. That drained my excess card money and put a stop to most of my card buying, at least for the foreseeable future. The problem with that was that I had bid on… oh.. 40 or so items on eBay literally the day before. They were all 6+ day auctions, so they starting closing last week and I didn’t really have the funds to pay for them. True to my intentions, and because I wanted to maintain a good eBay account, I scraped together enough to cover it all. I actually ended up only winning a couple, but I’m beginning to appreciate them much more than I had a week ago. Admittedly, I had a bit of the eBay fever. That needs to stop, hard and fast. Cold turkey even. So, I’m putting myself on a card diet. For May, I will try to refrain from any card purchases other than already committed to group breaks or trades with fellow collectors. No eBay, no COMC, no sportlots. It’s going to be pretty damn hard, but I think it’s doable. The only things coming out in May are the Olympic set, which I’m sure I can hold off on, Bowman, and Topps Archive which I have zero interest in. Series 2 comes out the first week of June. If I can hold off until then, I’ll be in better shape. Hopefully I can pick up a few freelance jobs between now and then. Anyone need a website worked on, or some photos taken?

Anyway, these are the last cards I bought for the spring (hence the title). I appreciate them far more now that I did when I was bidding on them. I know that seems silly, they are just cardboard, but perspective changes everything. 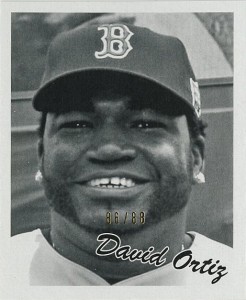 So, here’s a weird one, with a weird story. I had originally bid on an Ortiz 2007 All-Star Jersey card, with a big neon orange swatch in it. It arrived completely devastated from the USPS. It must have gotten caught in a sorting machine, then backed over with a mail truck. I emailed the seller and, surprisingly, he was completely cool about it. He not only refunded my money, but he wanted to be sure I was happy and offered to send something “similar” instead. I said sure, but that I was completely fine with just the refund, and he didn’t need to bother. A couple days later, this little guy shows up. It’s #86/88, a short printed, black and white mini from 2008 Goudey. I looked it up, and these are A) really hard to find and B) worth way more than the stupid $0.99 All-Star jersey I had originally won. That guy got 5-stars and short listed for sellers I will most definitely buy from again. It kinda restores your faith in humanity. UD probably could have found a better place to put the numbering though… like, oh, I don’t know, THE BACK. 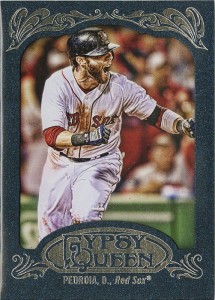 These next couple are just me working through the checklist of GQ awesomeness. I really, really like these blue borders. 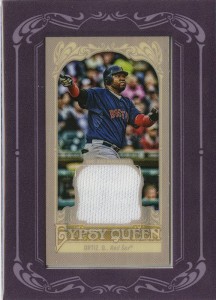 Ortiz mini, goes quite nicely with the full sized one I already have. Can’t wait to finish the collection. Just a couple more to go. 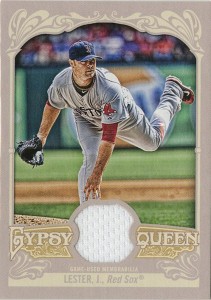 And a full sized Lester. Most years his cards are kinda crummy. I really like this one this year. Turned out really well. I kept getting outbid on the mini-version though. Oh well, probably for the best at the moment. 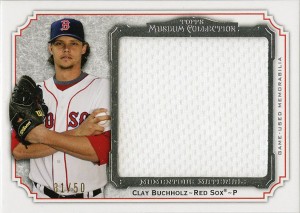 Now, here’s where we get a little crazy. Crazy as in, “you got those for how much?” Remember when I said I wouldn’t buy any more Museum Collection unless it was crazy cheap. Yeah, I didn’t break that rule. 31/50, jumbo swatch for $0.99, umm, yeah. I’ll bite. 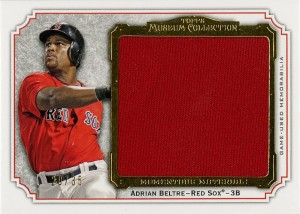 The only thing I can’t figure out is why, having been on the Red Sox for only one year (2010), he has a card in a 2012 product, and a limited one at that. I don’t really mind, more awesomeness for me. But he’s been a Ranger since January 2011. I guess they must have had a couple jersey’s left over or something. Despite his league leading number of errors at 3rd, he was a hot bat in 2010, I wish we would have picked up his option for 2011. Would have helped out when Youk went out with back problems last year.

Anyway, there they are. A couple really nice jumbo patches and some more off the GQ checklist. Looking back, it was a pretty good haul for the spring. Now it’s time to cool it off a bit, trade some more, and settle in until Series 2 and A&G. It’s going to be a long hot summer isn’t it? Yes, yes it is.