I’ve fallen off the grid for the past couple days because I’ve got one of the worst flues of my entire life. Friday night I was feeling just generally run down and after putting the kiddo to bed I laid on the couch to watch some TV. A couple hours later the wife asks if I’m ready to go to bed and put her hand on my head, I was burning up. My fever hit 103 on Friday night / Saturday morning and continued for most of the weekend. I got all the standard awesomeness that goes along with it. Fever, chills, body aches, cough, congestion, I was a festival of misery.

Monday I went to the doctor and he said it was too far past when it started for TamiFlu to do anything, and I’d just have to ride it out. Monday, Tuesday and today I’ve just been sleeping. I’ve still got most of my symptoms, minus the fever which thankfully seems to have broken.

The worst part of it was sequestering myself in the bedroom away from my wife and kid. There was no way I was going to let them catch this, so I tried to keep my distance. It’s been heart breaking to hear my girl on the other side of the door saying “Dada, dada!” and I can’t run and pick her up.

Anyway, I’m fighting this thing the best way I know how… 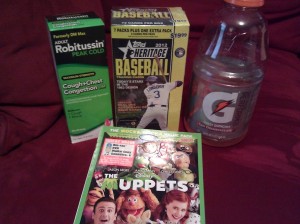