Conversation I literally just had with a co-worker.

Co-Worker: Because I never used to say “Douche-Bag” before I met you, now I say it all the time.

Me: That’s not my fault, (Other Co-Worker) sits closer to me and she doesn’t say it.

Co-Worker: But she’s a girl, you wouldn’t say it around her…

Other Co-Worker: He says it all the time.

Me: See. It’s just you. It’s like a gateway drug to other more awesome swear words. Like Cock Gobbler or Shit-Cock.

Co-Worker: *sigh* Great, now I have new words I have to go un-learn.

Since I made the suggestion a couple years ago for my company to use WordPress internally for it’s major websites, they’ve loved every minute of it. In fact, I actually saved the company over $40,000 in license fees to a 3rd party CMS that they had been paying annually for “support”, which was non-existent. I’ve been able to recreate and/or update all of our software products websites, our main website and a couple smaller subsidiary company websites, in WordPress with only a small team and with zero additional cost. That may sound like a giant commercial for WordPress in general, but it’s really more of a statement of fact. WordPress is dead simple for even the most computer-challenged office worker to use. I have office admins, in offices around the country, telling me how much easier it is for them to update things than it was with the old CMS. I’m honestly not getting paid to say this. I just have a deep appreciation for what WordPress can do and how much it’s changed what I can do on the web.

That said, it does have it’s limitations. It’s not a great CMS. It’s the single greatest BLOG platform ever created, but out of the box, it’s lacking some CMS functionality that sets it apart from enterprise packages. That’s ok. It wasn’t created to handle 1000’s of pages, it was created to handle 1000’s of posts and comments. There’s a distinction between the two. Static content isn’t WordPress’ bread and butter. Once you understand that, and can find ways around it, the platform really opens itself up into being just about anything you need it to be.

Some might say that there are better choices for managing static content, and they’d be right. However, I’m willing to trade some functionality that I have to eventually add back in, for some easy of use and flexibility up front. Especially design wise. Nothing really makes the designer in me happier than a simple CSS based design that I can change at will. In the past, with our old CMS, everything was ASP based with C# and this weird mishmash of bits of  random CSS thrown in. It was pretty counter-intuitive to designing. So much so that when it came time to redesign our intranet, I dumped that old system all together and tried to figure out how I could make an intranet, heavy with documents and databases, using WordPress.

To that end, I started searching for ways to extend WordPress’ core functions and there was a distinct lack of information on the subject as far as intranets are concerned. Maybe it shouldn’t be done, maybe there are better alternatives, who knows. All I know is that somehow the top blogging platform isn’t being used to drive company intranets and that suggestions for doing so are few and far between. So, with that in mind, I thought I’d share what  I’ve found to be handy tools and plugins that helped me get the job done:
[arrow_list]

[/arrow_list]
I hope someone finds that list useful. I thought it might be worth compiling a list of things to help with an intranet build since the resources out there are a little scattered and there’s not really any good solid guides put together. There are some other plugins I’m using here and there, but they don’t really have anything to do with intranet/CMS functionality. If you have any questions, feel free to ask.

Instead, I have this bloated, full of shit, piece of festering software monstrosity that looks something like this: 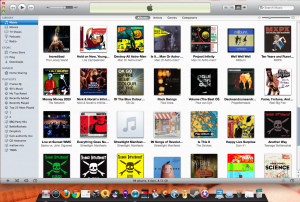 I have YEARS worth of music. I can’t physically load that much music into iTunes. Why? Because it would have a fucking aneurysm. I personally take the time and organize my music, on my hard drive, into folders, with correct labels and tags and album artwork. I do NOT need a program to do that for me. If you do, then I can only assume you welcome the day that our computer overlords will pick out socks for you to wear from your personal vast collection of socks, because we’re talking about something as equally simple.

My non-need for a multimedia device is just a reflection of the over all point I’m trying to make. Let me be exceptionally clear.

I WANT TO LISTEN TO MUSIC.

That’s it. Just listen to it. I know, it’s mind blowing. I want to click play and for my ears to enjoy the sonic vibrations of artists playing instruments.

Please, someone, anyone, PLEASE make me a music player that doesn’t suck. That’s it. I’m not asking for much. Something little. Something tiny. Something that simply plays the music I give it.

This comes close. It’s a Bowtie theme, but you have to run iTunes in the background. I don’t want that. I just want the player. Please, someone help! Save this generation from thinking that EVERYTHING needs to be inter-connected with everything else. Let them know that it’s completely ok to sit on the floor and listen to Miles Davis and NOT be building a “Genius” playlist around your listening habits. Someone save us!

I’m in charge of getting a new “employee database” system online at work that interfaces with my redesign of our intranet. I’m doing the entire thing in WordPress, and I chose “Connections” as my contacts manager, mostly because it supports huge CSV file imports, which is what our personnel system happens to export. There are a couple unmapped fields that I felt like messing with. Now, apparently, thanks to my meddling, everyone in the company is located at 42.346246 by -71.097773. It’s the little things in life, lol.

I have no idea

I seriously don’t even know why I watch TV any more. 90% of it is crap and the 10% I enjoy usually gets cancelled.

Syfy channel, really? You show wrestling! Honestly, what were you thinking?

And that’s what I could think of off the top of my head. Don’t even get me started on classics like Firefly, Farscape, Sports Night or the giant cluster fuck with Futurama.

Apprently what the general public “needs” is more shitty semi-reality shows on Discovery and History. There hasn’t been a new episode of Man vs Wild in ages but there’s new Ghost Hunter or Swamp People crap every damn week. Bullshit like Pawn Stars, Ancient Aliens and Monster Quest are allowed to be on TV but the History channel cancels documentary shows like Solving History with Olly Steeds, or History of the Pyramids all the time.

Why do I even watch TV anymore? Seriously. SyFy is right, you’re not allowed to be called SciFi anymore. The History Channel should be changed to just “Paranoia TV” based on how many “End of the World” specials they air. The Discovery Channel could become simply “Reality TV” and just show specials on the dumbest most back-woods morons they can find.

You know what’s in my “series” list on my DVR? Here, I’ll literally copy and paste:

The only real standouts in that bunch are Archer, funny adult cartoon on FX, NOVA because it actually still contains science (take notes Discovery Channel!), The Big Bang Theory because nerd humor is still fun, and Top Gear which is always a classic. Mythbusters, Kitchen Nightmares, The Killing and White Collar are all on the bubble and have nearly been deleted from my list. Stargate Universe is cancelled and the others either long running staples (Daily Show) or mild curiosities (Alaska State Troopers).

I could honestly watch 6 channels and be completely happy. American TV, you have completely failed as an institution. I hope you’re happy. Enjoy your ad-revenue in hell.