That sounds like some sort of CBS post-apocalyptic drama doesn’t it? Well, I’m back home now. I would have posted sooner but it took nearly the entire weekend to simply recover. The last two days of my trip were especially brutal. I won’t bore you with the minute by minute details, but the highlights include shooting all day, not eating lunch, shooting an insane VIP party, not eating dinner, having my hotel threaten to kick me out of my room (corporate booked my room… and didn’t give them a working credit card), throwing out my back, breaking a shoe, not sleeping and finally a rough return flight coming out of Chicago. Normally most of that would be minor background noise in an otherwise mundane business trip, but when all that happens in the span of 8 hours, it gets a little more insane. Either way, I did my job and got the shots I needed.

Let it never be said that artists don’t work hard. I even have proof. 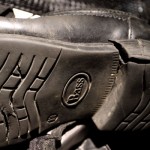 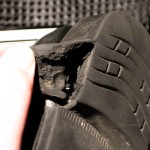 Those are were my work shoes. Shoes I’ve had for a couple years now and that I’ve worn to nearly every wedding, corporate gig, VIP event, party, and photo shoot I’ve ever had. Photographers and videographers are exceptionally hard on their footwear and it’s incredibly hard to find a pair nice enough to fit in at a black tie event and sturdy enough at the same time to take the inevitable beating that they’ll have to endure.

So, the next time you hear anyone say that running around with a camera is a “fun” job that anyone could do, you can tell them to kindly go fuck themselves.

What really amazes me, even more than the fact that people think my job is easy, is that they expect me to ignore common sense and hunger and focus solely on whatever it is they’re asking me to do. At about 90% of the wedding I’ve done, not a single consideration is made for letting the poor photographers eat. Especially at seated dinners. You all have SEATS, and waiters bringing you food, so, given that I don’t even have a seat, how do you expect me to eat? Oh, what’s that? I don’t need to eat? No, you’re right, I’ve only been on my feet, photographing Bridezilla since 11am, why should I eat before midnight, that’s just silly. Corporate parties are the same. Just because YOU ate, asked me to photograph X while you did, and then finished eating, don’t assume that somewhere in there I actually ate, because I didn’t. I was doing what I was told, and getting my shot. So, when you say something like “(fake laugh), oh, why don’t you grab a bite” after the catering company has cleaned everything up, it makes me want to punch you in the throat.

The point is that it’s what I do, and I’m ok with it, I just enjoy bitching about it every now and again. I’m also home now, so I really can’t complain. A constant stream of Advil is helping my back and I’ve already ordered new shoes. Back to the grind.