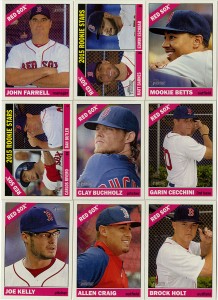 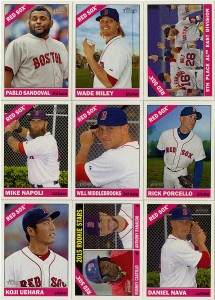 Not a bad set, good cross section of players. I didn’t realize Wade Miley looked like such a crazy person. Panda looks like he’ll fit right in in Boston, and that makes me happy. Another new Brock Holt card is always a good thing. Maybe I’ll get lucky and won’t have to pay out the nose for some fake gum stained copy. 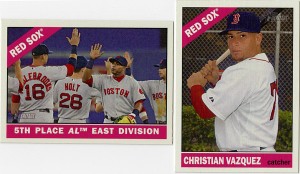 The last two cards (except they’re not), the team card and Vazquez. I’m also just now noticing who’s dead center of the team card. Sigh. Now I’ll have to find any extra copy for the Brock binder. 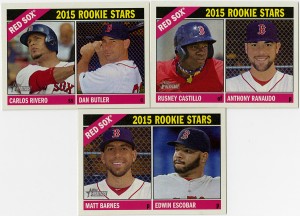 I scanned the “Rookie Stars” again horizontally just so my OCD would quit bothering me. Castillo and Ranudo, check. Barnes and Escobar, check. Who on earth is Carlos Rivero? I actually had to google him. He had ONE at bat after being called up last August. He walked. He was released at the end of the season and claimed off waivers by the Mariners in November. So… why the heck is he A) on a Red Sox card, B) on a card at all and C) called a “Rookie Star”? I doubt his one game in the majors was enough to qualify him for rookie status in the first place. This is the kind of stuff that fills me with rage against Topps in general.

The general lie that Topps (and probably the other manufacturers as well) likes to perpetrate is that “cards go into products months ahead of time”. So, they claim that checklists, the ones they’re unable to provide because they’re not “finalized”, are compiled even earlier than the products. Bull. I’ve worked in and around the printing industry. The level of production that comes from the commercial printers they use is staggering. They probably produce hundreds of thousands of cards a day. They’ve claimed in the past (with Heritage High Numbers) that they even went back and printed more after asking retailers and breakers if there was demand for it. I can almost guarantee that cards are produced no more than 2 months ahead of release. Plenty of time for early card products to have corrections made from post-season/winter roster changes. Heck, Heritage has cards highlighting the previous World Series in it. That’s 5 months prior. You’re telling me that an event that happened 5 months ago can be highlighted in your product, but roster changes from 4 months ago are “too soon” to be updated?

The ultimate irony? There are “Traded Player” short prints IN this set. Yup. Check it out. So, they had time to create special SSP cards with trades from the winter, but they can’t be bothered to double check rosters?

This is the definition of Shenanigans.

Sorry for soap-boxing, but it’s this stuff that drives me truly nuts. There’s just no reason for it. It’s either intentional, or just lazy.

At this point, you’re probably figuring I’m done with Heritage, but not so. There’s the small matter of the four shortprints of the most important players on the team. Again my better judgement, I can’t consider a team set complete without, literally, the faces of the franchise. So, I wonder through the desolate landscape that is eBay in search of the missing cards.

Turns out I don’t need four. I actually need five. Heaven forbid that my “Master Set” dealer include the one “Rookies Stars” card that features players from both Boston and Detroit. 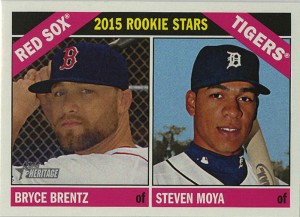 This. This is the card that wasn’t included. Honestly, if I’m busting cases and I have people ordering Red Sox and Tigers team sets, I include this card with both sets. Otherwise you have a giant pile of multi-team cards that no one is going to buy. I actually took advantage of a seller who didn’t think that out entirely. They had a “Misc 60+ card lot” and I won the whole thing for $2. I’m going to do a post about all those cards shortly because there was a surprise hidden in it that the seller didn’t notice, but I’ll save that for tomorrow.

The short prints. Well, three of them at least. I’m still missing the Hanley Ramirez one, but I can at least put everything safely in the binder after receiving these three. Big Papi looks unhappy about being a short print, and I can’t blame him.

So, while I love the idea of Heritage, it has so many aggravating details to it that I consistently hate it as well. I’ve learned my lesson with some other sets I dislike, I simply don’t buy them. That’s why I don’t have any Archives, and why I’m not buying any Donruss this year. Heritage, for some strange reason, still gets me to buy it, even though I could easily rage-quit the entire hobby over it at a moments notice. It’s like a train wreck that you just can’t look away from.