I decided to go ahead and clear a spot in my player binders for Xander Bogaerts. He’s not going anywhere, the Sox are clearly invested in him and since moving back to SS he’s been more confident and it’s translated into his play. 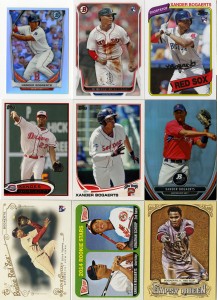 I think, with the exception of the 2013 Pro Debut and the Archives cards, that I actually had all these, but I like to maintain the team sets as they are and my player collections are strictly duplicates, which means I needed another copy of most of these. The whole collection came together and included multiples of each card. I think there were 20 or so cards all together. All together they make a nice group/binder page. The 2013 Pro Debut and the Ginter are probably my favorites, but the photo they used for the GQ card is equally awesome.