Papas got a brand new grill

My father-in-law just did something incredibly nice. He bought me a grill for helping him out this year. A GRILL. My old grill was tiny, 10 years old and broken in so many ways. I was actually kind of surprised it made it that long. I used it pretty much once a week for most of the year for all those years. I love to grill. It’s in my blood, apparently.

So deep does my love for grilling run that I had kept my old grill alive in a Frankenstein like fashion well beyond it’s usefulness. It was partially because I couldn’t afford a new grill and partially because I didn’t want to give up on an old friend. I cooked spaghetti on that grill when we didn’t have power after the hurricane. I smoked ribs for the first time on that grill. It wasn’t just a grill, it was personal history.

It was it’s time though. I had gutted it 4 times, reinstalled 3rd party burners, heat diffusers, gave up on heat diffusers, bought a platform and a box of lava rocks, traded those for ceramic briquettes, gave up on those, went back to heat diffusers and finally, when the bottom was rusting out, combined everything into FrankenGrill and just kinda winged it. It was time.

I did my homework, researched all sorts of makes and models. I knew what I didn’t want. I knew that most of the brands that were carried and Home Depot and Lowes are crap. MasterFlame, Char-Broil, Flame King, Char-Master, all cheap thin guage “stainless” that rusts in about a month. The reviews on Amazon speak for themselves. I also knew that a really nice Weber was out of my price range. Then I remembered what had served me so well for the past, a Kenmore. It’s not the best brand, it’s a solid “middle of the road”, BUT Sears has a legendary parts department. That’s how my old grill lasted so long, I kept finding parts for it. My old grill was a Kenmore, and so my new grill should be too. 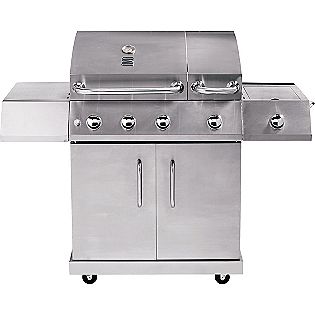 Introducing, the Kenmore 3018S. Other wise known as the Kenmore 4-Burner with split top and side burner. It’s got 3 main burners, a individual “searing” burner for steaks and, well, anything that needs searing, lol. It’s got a side burner for sauces and glazes. It puts out 60,000 BTUs of grilling excellence, is 100% stainless with super-heavy porcelain coated cast iron grill grates, and has a lifetime warranty. I love it. I really really love it.

I’m so firing this thing up this weekend. Yes, I realize it’s Christmas. Yes, I plan on making Christmas Ribs. Yes, they will be legendary, thanks for asking. 🙂

PS: Yes, it IS under the Christmas tree, with a bow on it no less. 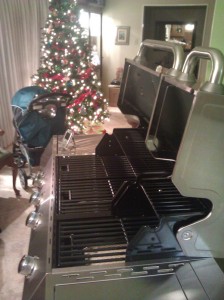