Being a big fan of desktop customization in general, and a self-proclaimed Photoshop wizard, it was really only a matter of time before I started making things for GeekTool, the roll your own Mac info widget thingy. I’ve been using GeekTool for probably a year or so now, mostly on my desktop at work. It’s a handy way to keep track of the weather, the time, the day of the week, etc. The “time” was always kinda basic and bland. It’s really just a text display and unless you have a ton of fonts, there’s really not much in the way of customizing you can do to it. And the “minimalistic text” thing gets kinda boring after a while. So, since it’s good to flex the creative juices every once in a while, and since I had just finished creating a set of Photoshop Styles for another project, I figured I may as well used them. So, I present to you, FlipClock for GeekTool. 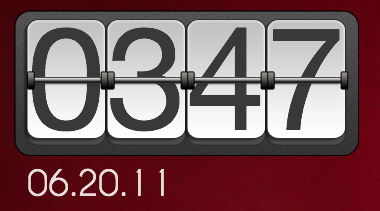 It’s a fairly simple set up, but I thought maybe someone else might find it interesting. The clock is four pieces. The background layer, the background of the flip digits, a script to grab the time, then the “bar” graphic overlay on top. The font I’m using is regular old Helvetica since it’s spacing is consistent, but it should work equally well with other equidistant spaced fonts.

Also available on the downloads page.

PS: I do realize there are multiple widgets, scripts, programs, etc for displaying a “flip clock”, as well as at least one other for GeekTool. There’s nothing wrong with those others, I just like mine better.