On a complete and total whim, I’ve recently become interested in collecting baseball cards again. When I was growing up, comic books were my collection of choice and I amassed a good 1000+ collection of them, mostly small imprints and independent labels like Image and Dark Horse with the occasional run of X-Men sprinkled in for good measure. I actually have a few rather rare comics, a couple variant covers, a couple signed comics, and lots and lots of “Issue #1” of dozens of titles. I pretty much have everything Jim Lee did between 1990-2000.

Baseball cards were something I also collected, but just in the periphery of my free time. My father, the year I was born, decided it was a good idea to purchase the entire factory set of Topps cards from that year. That was a tradition he kept up for a number of years until I was able to continue it myself. I believe I have 1980-1990 factory sets from Topps somewhere in my closet. That was about as deep as my collection got. Topps was for the sets and then I’d grab random packs, usually of Upper Deck, whenever I found them.

I gave up on both collections mid-high school and never really looked back. Money was tight and hobbies are the first things to go whenever that happens.

Having talked with my friend Sam at length about baseball and cards over mexican food one night, it seemed that the “sport” of card collecting had really been taken to the next level. Topps “purchased” the rights to the entirety of Major League Baseball and is now the only company allowed to make cards featuring teams and logos. The MLBPA signed a deal with Upper Deck to use player names, but names only, which make for some kinda boring cards. So Topps is really the only game in town.

That said, at least Topps offers a variety of cards. Actually it’s a over-variety of cards. They have, give or take, 20 different lines of cards. They range from a couple dollars a pack for normal “base set” cards to $150+ a PACK for things like “Topps Triple Threads” which feature actual pieces of cloth jersey or bat IN the card. They’ve also taken signatures to the next level. They get players to sign hundreds and hundreds of cards, some regular, some special cards, some really rare 1-0f-1 type stuff.

The collecting almost isn’t about the player cards any more. It’s more about the crazy extra stuff. Cards with pieces of stuff in them, cards with signatures, cards with holograms or special printing, cards with dye-cuts or minatures, etc, etc. Then there’s extra special lines like “Gypsy Queens” or “Allen & Ginter” which are throw back designs with special features or artwork. It was actually the Allen & Ginter set that caught my eye as something to collect.

The A&G cards feature retro designs, water-color-ish portraits and special signature inserts. A “hobby” box runs about $90 and features 12 packs and a guarantee of a certain amount of the aforementioned “cool stuff”. That’s right in my wheel-house.

So, I decided to take the plunge. My goal is to collect just basic player card sets, of just the Red Sox, for 2004 through the current year and beyond. If I happen to run across some of the cooler cards along the way I’ll pick them up, but I’d be happy with just the commons at the moment. I just received my first set off an ebay purchase. The entire 2010 Red Sox team set of A&G cards. 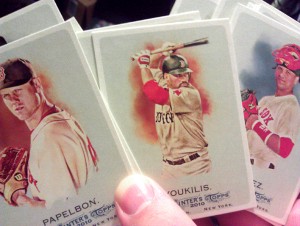